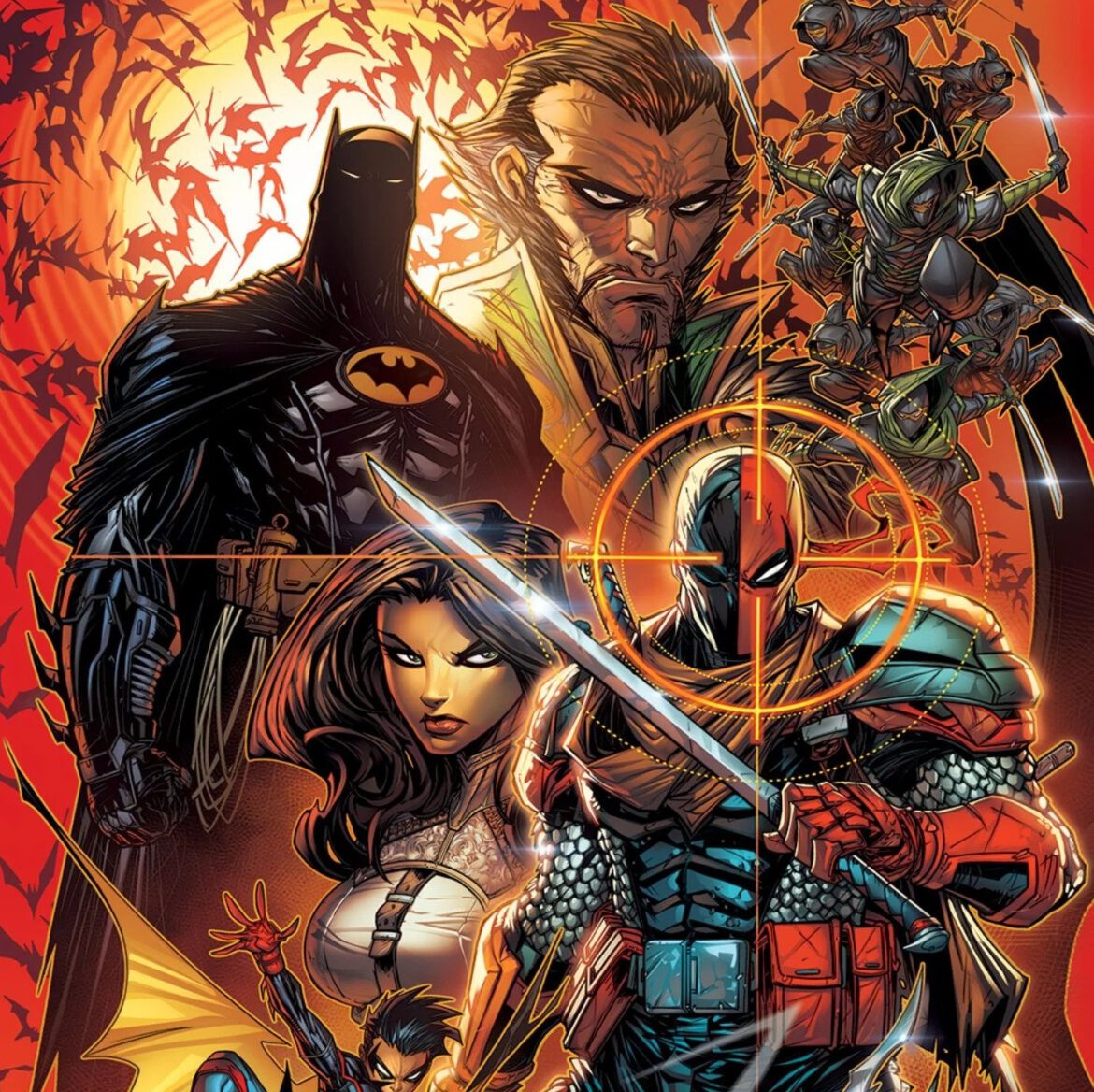 Synopsis (spoilers ahead): Shadow War: Alpha #1 begins in Nepal, the Demon Palace, a mystery person sneaks into an ailing Ra’s al Ghul’s company. Ra’s may be sick, but he still is ready for a fight; he picks up two swords and prepares to battle for his life.

The scene shifts to a training duel between Talia al Ghul and Robin. We see an aged Ra’s looking on as his daughter and grandson spar. Talia dodges a strike from her son, which surprises Damian. Talia just tells her boy that he talks too much and that is why he lost the Lazarus Tournament. Throughout this, we see that Ra’s is coughing blood. It looks like he is thinking about an exchange he had with his mother, Mother Soul. She told him that the Lazarus Pits are cursed, and Ra’s decides that it is time.

In Gotham, Lock-Up has rounded up some Blackgate inmates who are on probation. Batman swoops in and turns the tables on Lock-Up. Oracle contacts Batman; she wants him to see the news. She sends the feed to Batman.

It appears that Ra’s al Ghul is looking to turn himself into the D.E.O. Before doing so, he has a list of demands, including a wish to make a public statement before he is arrested at the Markovian Embassy in Washington DC.

Back in Nepal, Talia confronts her father about his demands, and Damian eavesdrops on the discussion. Ra’s has decided that his trying to change the world through violence has not worked; it has worsened the situation, bringing the world to the brink of an ecological disaster. He wants to try something new; they owe it to Damian, and he hopes that she will understand.

Batman is already outside the embassy and so is a heavy police presence. Oracle has got her eyes and ears on everything. They are preparing to stop whatever plan Ra’s is trying to enact. Batman also tells her that they need to make sure that the al Ghuls are safe as well and is soon interrupted by Damian across the roof in costume. Barbara overhears this exchange and tells Bruce to hug his son. Damian believes that they are trying to do the right thing, and once the al Ghuls are safe, Bruce and Damian can talk.

The proceedings are being watched by the Outsiders, Luthor, and the Justice League. Ra’s approaches the podium, identifies himself, and starts to speak as the crowds and press watch. Ra’s wants to work with the world to fix their problems, and he is willing to share with everyone all that he has learned. He is interrupted by a gunshot. Ra’s al Ghul has been shot in the head. Batman sees Deathstroke in an old costume with a sniper rifle. He fires more rounds, and Talia is hit in the shoulder. Damian races to his mother and grandfather while Batman goes to confront Deathstroke who has already thrown grenades. He plans to blow the body of Ra’s up and tells Batman as much while Damian fights to get to his mother and grandfather. Damian gets through and is running to his dead grandfather, but he is not in time. Batman swings in and grabs his son as the grenade next to Ra’s head explodes. Damian is horrified, but soon Batman is holding his grieving son. Damian, however, refuses to go home; he has to hunt down Deathstroke and bring him in dead or alive.

In Nepal, the bodyguards who have rescued the wounded Talia take her to a Lazarus Pit. She is not dead and tells them to stop. She orders them to get a doctor and to recall all the Shadows. They have to take down Deathstroke and his family for what he has done.

In Zandia, the headquarters of Deathstroke Inc., the Secret Society is in shock. Deadline and Prometheus are discussing why they think Deathstroke did this and that this is a disaster for the Society. They run into Deathstroke and Respawn. They all see the report, Deathstroke did not do the killing, someone else made it look like Deathstroke did the deed and that is not all. The Shadows make their strike on Deathstroke Inc. in retaliation for the death of the Demon Head. This event will be continued in Batman #122.

Analysis: For an introduction to this event, this is terrific. There is intrigue and mystery here in Shadow War: Alpha #1. Who is the real killer? What do the opening pages have to do with the story itself? In the beginning, it looked like Respawn has decided to attack Ra’s as he is preparing to do in the Deathstroke Inc. series, but it is not clear if this is a real scene, a dream, or the imagination of a character. The scene quickly changes to the sparring match between Talia and Damian.

This also shows character growth in Ra’s. He admits to his daughter that their old ways of doing things are not working and that he is willing to think outside the box. From his discussions with his mother and his own coughing attacks, Ra’s realizes that his time in this world may be coming to an end. He wants to leave a better world for Damian, and what they are doing now is not going to realize that goal.

This leads to who the mystery of “Deathstroke” is. One of the beliefs was that Respawn was Grant, Rose’s brother, but it was revealed that the boy is actually a mix of Slade Wilson’s DNA with Talia, making him in essence a third son to the mercenary and a half-brother to Damian Wayne. Is it possible that the fake Deathstroke could actually be Grant Wilson after all? That is only a guess. Whoever it is, he is good, he got through Oracle’s surveillance and placed a perfect shot to kill Ra’s at the podium.

The art is the standard superheroes style but drawn with a grittier style to match the subject matter herein Shadow War: Alpha #1. There really is not an area of humor, but there are some lulls before the action that elevates the style to keep it from becoming cartoony. Victor Bogdanovic, who I do not have much of a history reading, definitely went all out with his designs of Talia’s Shadows. The splash page showing them assembled is interesting. I studying the panel, the only character I recognize is possibly Cheshire and Frankenstein, but I am not sure if those are the right characters. It looks like an eclectic gathering of source refs, hitmen, monsters, and possibly some Joker wannabes. It does look like the white woman holding the flaming sword is a leader of some kind as she is seen in the last panel leading the Shadows against Deathstroke Inc.

This is a great opening chapter to the story. It grips the reader in action and mystery, and it looks like the status quo is being changed!