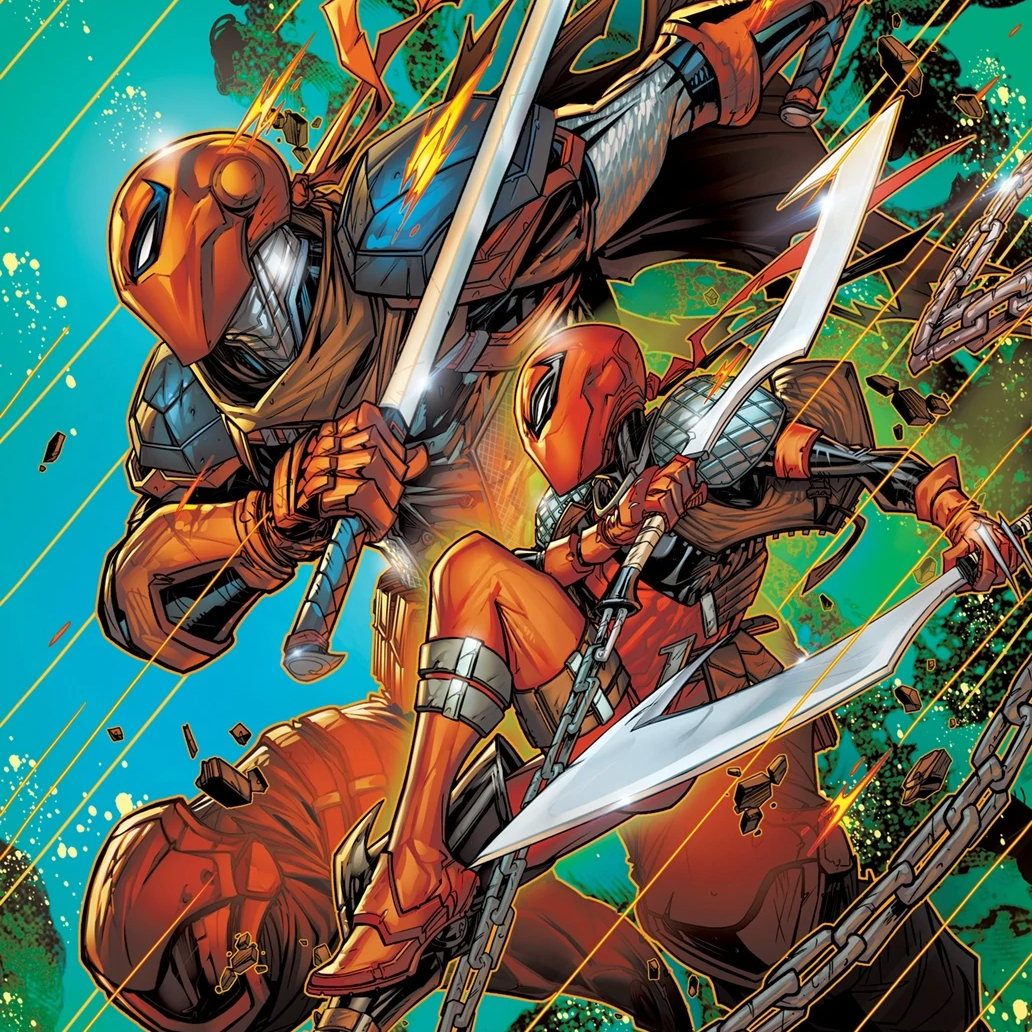 Overview: In Deathstroke Inc. #8, the questions pile up, and it’s a race against time as Batman and Robin track down Deathstroke independently. Who will find Deathstroke first?

Synopsis (spoilers ahead): Deathstroke Inc. #8 begins With the attack on Deathstroke Inc. (also known as the Secret Society) and the escape of Deathstroke and Respawn, the Shadows are looking for answers. Angel Breaker has Raptor, and she wants to know where Deathstroke is.

Deathstroke and Respawn are in San Francisco. Slade Wilson set up a bunker under the city long ago. He used the bunker as an armory during the West Coast Titans era. It is here that Slade plans to learn what and who is behind the events that have sparked this war. After a banter where Respawn goes to cut his own eye out in his desire to be like his newfound father, Slade tells the boy that he does not want his son to be like him.

Bruce and Talia share an intimate kiss. The two break it off, and Batman replaces his mask. He wants to know why Ra’s wanted to surrender to the DEO. Talia does not know, but Ra’s al Ghul’s mind was the clearest it has been for centuries, as he had been rejecting the Lazarus Pits. This surprises the Dark Knight. Talia shares that she believes the reason was Damian. The boy showed the Demon that someone could change for the better. Talia has learned the same lesson from the same teacher.

The two are interrupted by Angel Breaker and Raptor. Raptor had asked for an audience with Talia, and Angel Breaker grants it because he is also a member of the Demon’s Shadow. She does intend to kill him afterward though. It is here that Batman first learns about the Lazarus Tournament. Batman wants to interrogate the man, but Breaker tells him that his skills are weak because he will not go the distance. She reveals to Batman that she knows Ghost-Maker. Batman stops Angel Breaker from murdering her prisoner and gives Raptor an escape. Batman wants Talia to call off the Shadows; he will find Deathstroke. She does not agree and calls the rest of her forces to surround Batman. Batman escapes as well. Talia tells Angel Breaker to leave Batman but follow Raptor. He will lead them to Deathstroke.

Raptor does call Slade to warn him about Talia and Batman. He wants his boss to stay hidden. Just after the call, the power is cut. Respawn replaces his mask, and he is attacked by Ravager and Robin. She lead the boy to Deathstroke.

Analysis: This issue, like the others in the big Shadow War event thus far, appears to be a slow burn. Not a lot of action but a lot of questions. Not one of the characters we are exploring knows what is going on. It appears that everyone is on the same quest but for different motives. This causes a lot of head-butting, standoffs, and running.

There is some action in Deathstroke Inc. #8, but it’s muted. The action serves only to add some spice to this story, which is more cerebral. This issue is more about the different characters interacting with each other and asking each other questions with a little saber rattling. Most of the focus seems to be on Damian Wayne. Batman might be learning more about his son in this story. I hope it improves their relationship.

On the relationship front, we get a lot with Respawn and Deathstroke. I find this appropriate as Deathstroke should be the central figure of his own book, and that seems to follow the pattern so far. In the previous issue of the event, the focus of Batman #122 is on Batman’s investigation, which leads to his encounter with Talia. This encounter is resolved in this issue.

Deathstroke and Respawn have an interesting relationship. Deathstroke is actually acting like a father to Respawn, and the boy is in awe of his father. He looks at Deathstroke as his hero, and he says what many sons say to their fathers, “I want to be just like you.” Right now that can be contrasted to the relationship of Batman and Robin, who are estranged and are really forced to be with each other. Respawn not only wants to be with his father, but he is willing to face off with the unknown assailants to protect Slade.

Deathstroke, for his part, is similar to Batman and does not want his son to be like him. He wants to train him but instead of remaking himself in his son, I think he wants to create his opposite. I think about the scene in the Young Justice cartoon’s first season where the League is discussing who to add to their ranks. Robin comes up, and Wonder Woman questions Batman’s use of kids in his war on crime. He says that he trains them, and Diana interrupts Bruce saying that he wants to make them just like him. At that, Batman says no, so they will not be like him. I see this with Slade. Respawn really does not know what he wants, he just wants a father.

I believe the art flows pretty will between the issues. The styles between the Batman team and the Deathstroke team pretty much match each other with some differences. The main difference I see is actually in the coloring. Batman #122 has a painted feel in the coloring, which is not matched in Deathstroke. The coloring is lighter, not as dark in colors. The drawings themselves match each other a little better ,but Deathstroke Inc. #8 has a more cartoony feel to it. It is not as jarring as other style combinations, but there is some noticeable differences that mark the changes in the issues. It will be interesting to see if this is story is collected if some of these differences will be smoothed out.

I like more cerebral thought provoking stories. This is a mystery through and through, and after the first three issues there really aren't many answers. That will change in the next chapter.