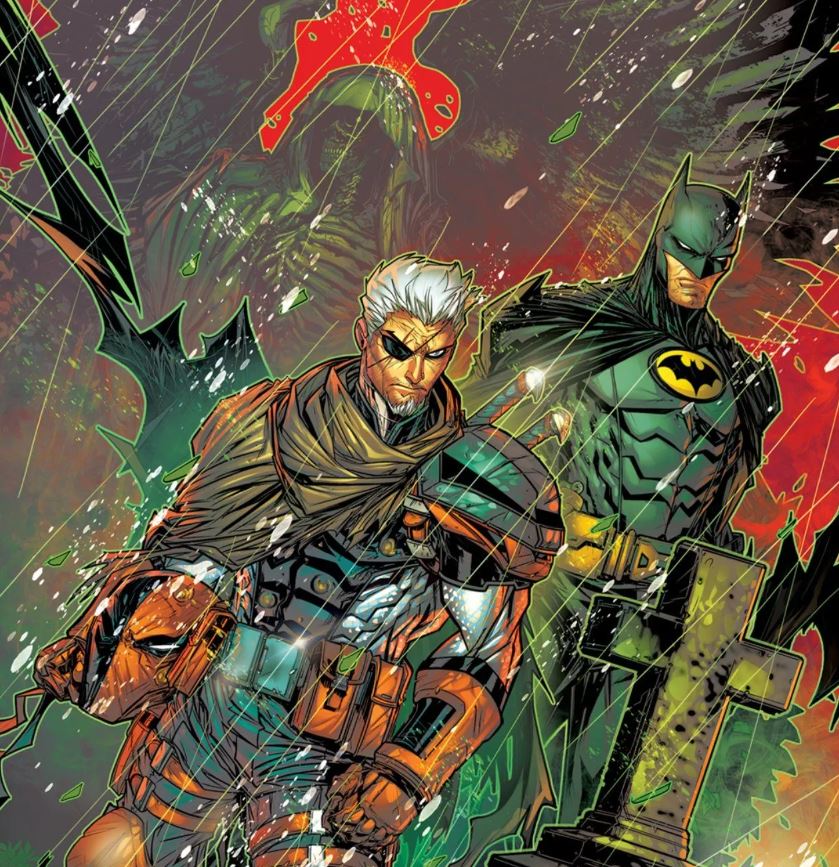 Overview: In Deathstroke Inc #9, the questions mount as the body count climbs. Deathstroke has seen the last death in his family as he goes to take the war to the doorstep of Talia al Ghul. He brings the Shadow War to Nepal.

Synopsis (spoilers ahead): As Deathstroke Inc #9 begins, Respawn is gravely injured. Slade gets him to the Crime Doctor, but it is too late. The boy is pronounced dead. Slade is ready to kill the doctor, and Rose steps in and allows the doctor to escape with his life but not his fee. Slade is furious. He did not kill Ra’s, but he is willing to make sure that none of the al Ghuls will survive this conflict as retribution for Respawn’s death.

Batman and Robin confront the false Deathstroke and the true killer of Ra’s al Ghul. The fake Slade pleads his case saying the killing is justified. Both Bruce and Damian identify that the man is hiding an accent. Batman senses that he knows who the man he is talking to is. The subject admits that it hurts to wear the costume, but it is necessary. The man drops a clue; he says that he has followed Batman’s orders before. After this, the man runs off with Robin on his tail. On his way out, the man knocks out a support beam, and the building starts to collapse. Batman grabs the unconscious Gambi, and he and Robin escape the collapsing building. Robin senses that Batman knows something that he is not telling.

At the Batman Inc safehouse, Ghost-Maker monitors the Secret Society. Suddenly they are under attack, not by the Shadows, but by Deathstroke. He escapes with the Society, but Deathstroke Inc faces off with Batman Inc. Deathstroke and Ghost-Maker square off and fight. Slade plays dirty and grabs Clownhunter, breaking the boy’s arm. When Ghost-Maker drops his swords, Slade releases the injured boy and blows the tower. Slade and his team head for a suicide mission into the heart of the demon. He also admits that he knows who killed Ra’s.

In Nepal, Angel Breaker reports to Talia. She was unable to recruit Black Canary. Talia, however, has other worries right now, namely what to do about Mother Soul. Talia orders her to return to Lazarus Island. Leaving Talia to plan the next attack, she is interrupted by a report that a Batplane is on its way to Nepal. Talia thinks that Batman and Robin are coming back; she is wrong. Deathstroke Inc. attacks. The story continues in Robin #14.

Analysis: More clues are dropped in Deathstroke Inc #9 with another story lacking major action but at the same time furthering the action. It seems that Deathstroke knows who the mystery man is, but he does not care. He has seen his family torn apart time and time again, and this latest death, the death of his clone he looked on as a son, drives him over the edge. He does not care about Batman or even Batman Inc; he just wants revenge. Deathstroke does not leave many people alive after an encounter, but it is of note that he kills no one in the Batman Inc team. The only real injury in the encounter is the arm of Clownhunter, and that act allowed Deathstroke to escape.

Batman, for his part, thinks he knows the assassin, but he cannot believe that he ever trusted the assassin that is standing before him; that belief blinds the master tactician. He cannot see who it is he is talking to and that weakens Batman.

Deathstroke is finished with this war, and he intends to end it once and for all. In order to do that, Slade needs his team, so he gathers them and steals a Batplane, which allows them to get in close for the attack.

The art is consistent with the art in the overall arc so far. I want to point out the final splash page, which shows Deathstroke Inc attacking the Shadows. This is a terrific mirror to the final splash page of Shadow War: Alpha where Angel Breaker leads the Shadows to attack the Secret Society. Could this current battle be the end battle of this war? Who will die, and who will survive? It looks like all the players are on their way to the battlefield.

This story continues to be fantastic and enjoyable. There is more emotion and pathos than violent action, and that is unusual for a story such as this. I cannot wait for the next installment in the pages of Robin.