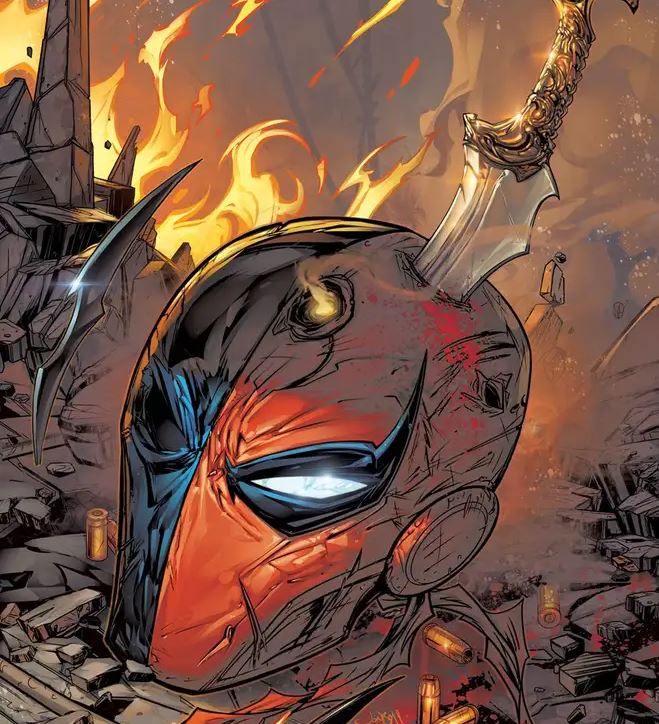 Overview: The Shadow War ends in Shadow War: Omega #1. Geo-Force is brought in for the crimes he committed. Talia al Ghul turns herself in, and Deathstroke returns to start a new Crisis for the DC Universe.

Synopsis (spoilers ahead): As Shadow War: Omega #1 begins, Geo-Force recounts the death of Markovia at the hands of Ra’s al Ghul. He wants revenge, and the end of the line of the al Ghul’s, the death of Deathstroke is a desired after-affect. Batman tries to talk his old friend down while Angel Breaker breaks off her fight with Ghost-Maker to attack Geo-Force. Brion repels the attack, giving the Secret Society a chance to grab the body of Deathstroke while Geo-Force rips the palace apart. Ravager tries to get to her fallen father, but she is cut off by the destruction. Batman, Robin, Talia al Ghul, and Ravager leap out of the collapsing structure just as Black Canary arrives in the Batwing. The people board while Dinah hits the afterburners to get out. Batman has ordered Batman Inc. out, and all the forces in the battle scatter.

Geo-Force brings down the plane, stranding the five. Geo-Force creates a rock giant to destroy Talia. Robin uses a grapple to climb the giant to face Geo-Force. The two fight, and Robin brings the Markovian down with a kick to the face, declaring that heroes do not kill. Batman catches Robin before the crumbling giant crushes him. Talia now has her blade to the throat of the wounded and defeated Geo-Force. Robin goes to stop his mother from killing the man by telling her that Ra’s wanted to be better. This reaches Talia, and she relents on killing Geo-Force, just giving him enough time to mount one more attack, which is quickly stopped by a kick to the face.

Geo-Force is taken into custody. Rose goes in search for Deathstroke. Angel Breaker escaped with the Demon’s Shadow. Black Canary goes in search of her. Ghost-Maker will continue to lead Batman Inc., and Talia turns herself in to the D.E.O. This leaves Batman and Robin, their conversation about the Lazarus Tournament and the boy’s romantic life, which is cut short by a call from Oracle. Barbara reports that Killer Moth and Firefly have teamed up and are headed for Slaughter Swamps. Batman responds, and Oracle asks if he wants her to call in backup. Batman decides that this is a job for Batman and Robin.

The epilogue shows the Secret Society with the body of Slade Wilson. They have taken him to the Lazarus Pit, and the Society dumps the body in. Slade emerges from the pit with a new contract. He is going to kill everyone. This will be continued in Dark Crisis.

Analysis: This issue is really a big boss battle. We do get the exposition of why Geo-Force is doing what he is doing. The reasoning makes sense. Leviathan, who was Talia, destroyed Markovia, and there is the reference to the death of Terra because of Deathstroke. I do still feel that this reveal is a real letdown. It is using a low-tiered character as the instigator of a major catastrophe, which is really a vehicle to resurrect that character. Sometimes it works, sometimes it doesn’t. In this case, I feel it really does not work.

There is great development with Robin here in Shadow War: Omega #1. He declares that heroes do not kill, and he is able to talk his mother down from killing Brion. Even though she did not agree with her father, she still honors him by turning herself in, so she and Geo-Force are both in the custody of the D.E.O. That cannot be good.

The art is cleaner, but the epilogue uses the grittier, scratchy style of the Deathstroke Inc. issues. I am not a fan of this style, but I see the use here. It is a darker scene basically showing the resurrection of Deathstroke. In the beginning, his body is shown ravaged with wounds, and he is risen in the end, interestingly still missing his eye.

The most disappointing aspect of this story for me is that it is a direct lead into Dark Crisis, which tells the story of the death of the Justice League and the rise of the next generation. It’s a good concept, but I know that it will not last. DC always brings back the old characters in the end.

Overall, this story and the arc had many good points, but unfortunately, the ending does not excite like many stories. This is just a last boss battle that leads into the next event. It is a shame that the excellent writing and development throughout the arc are lost with this ending. It is not forgotten; just put it on the back burner.