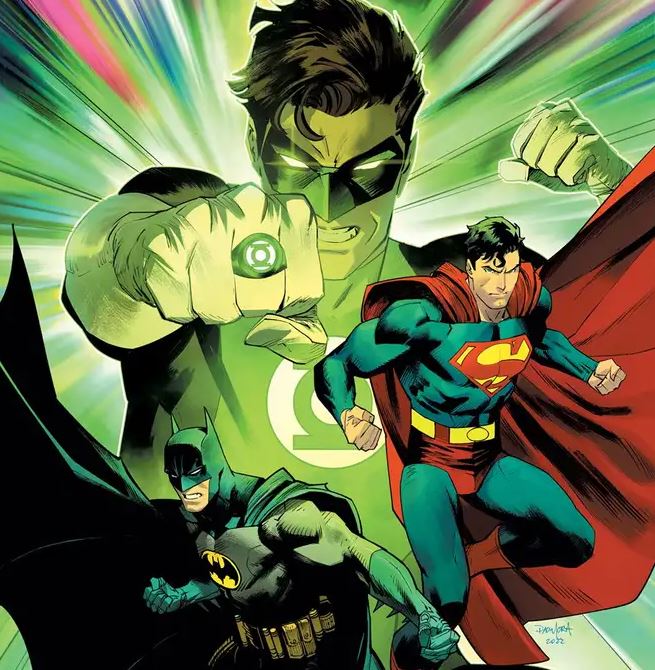 Overview: In Batman/Superman: World’s Finest #4, Batman and Superman battle against Devil Nezha and Green Lantern. Meanwhile, Supergirl and Robin learn how to imprison Nezha away for good.

Synopsis (spoilers ahead): Picking up after the cliffhanger at the end of the last issue, Batman/Superman: World’s Finest #4 starts with Batman and Superman imprisoned by a brainwashed Green Lantern (Hal Jordan). Hal constructs saws, which he fires at Batman and Superman. Batman manages to escape, but Superman is injured. Batman surmises that the only way Green Lantern could physically harm Superman is if his powers were augmented by magic.

It’s then that the Devil Nezha, the mastermind behind all of this, arrives. While Superman battles a powered-up Green Lantern, Batman struggles against Nezha’s grip. The Caped Crusader gets Nezha to talk, and Nezha reveals that when he was imprisoned nearly four thousand years ago, he conjured up a new spell that would allow him freedom, and in turn, aid him in conquering a planet in dire need of his discipline.

While Nezha speaks, Batman hypothesizes that Nezha has been rushing around the world, taking heroes off the table quickly, because he’s worried about his own defeat. When Batman says this out loud, Nezha pauses, bewildered momentarily, then flings Batman into the air. This allows Batman the freedom to save Superman.

Using the Philosopher’s Stone stolen from Alchemy, Batman is able to ward off Green Lantern’s assault long enough for Superman to catch his breath. Batman tells Superman that they need to make a hasty retreat.

Back in China, 1579 B.C., Supergirl and Robin learn more about the Warriors of Ji. The duo learns that the ancient heroes drove Nezha into a tomb, and one of them had to sacrifice himself in order to imprison Nezha. It was a price that had to be paid, and it would need to be paid again. The two heroes also learn that the longer Nezha is free, the more powerful he grows. On their way back through time, a time storm knocks Robin off into the channels of time.

Back in the present, Batman reminds Superman that Green Lantern is powered by the strength of will. He notes that while, individually, Hal Jordan may have more willpower than either of them, together Green Lantern probably doesn’t stand a chance. Using the Philosopher’s Stone and their own strength of will, Superman and Batman focus their combined might on Lantern’s ring.

The ring flies off from Hal’s finger and lands on the hand of a combined Batman-Superman being. Nezha doesn’t skip a beat, summoning Black Canary, Red Tornado, Martian Manhunter, Firestorm, Wonder Girl, and Kid Flash to fight this new entity. This new team of mind-controlled heroes battles the Batman-Superman being while Nezha mind controls nearby civilians into joining his army.

Just then, the Doom Patrol calls Batman, telling him that they found Nezha’s tomb on an island off the coast of Corto Maltese. The Batman-Superman take Nezha up into the atmosphere and battle him across the planet. He resists, and at that moment, Batman and Superman separate again. Supergirl arrives, pummeling Nezha toward the tomb.

Batman and Superman ask where Robin is, but Supergirl, in her tired state, tells them that they need to lock Nezha away now, and the only way to seal his tomb for good is for one of them to sacrifice themself by sealing the tomb from the inside.

Analysis: Batman/Superman: World’s Finest #4 is a beautiful and well-executed blend of fast-paced action and terrific plotting that continuously feeds new information, so as to keep readers engaged and hanging onto every panel. Dan Mora’s art and designs are mesmerizing, and his paneling is intense. Mora balances simple and straightforward paneling against effective and eye-catching spreads that heighten the big moments. This might be a no-brainer statement to make if one were to talk about basic comic book structure, but in the context of Batman/Superman: World’s Finest #4, it’s balanced expertly. There is so much information, action, and movements going on throughout this issue, but it all comes through clearly and naturally, which speaks to the craft of the art team.

Tamra Bonvillain’s colors pop and bring Mora’s art to life in a way that’s awe-worthy and memorable. Midway through the book, there’s a full-page panel where Batman and Superman combine into a new, Green Lantern ring-powered entity. It’s a big moment, one that serves as a perfect example of such great linework and coloring. In any other book, this classic-inspired plotting might fall flat in modern storytelling, but with this team, it’s just begging to be made into an action figure.

The moment when Supergirl and Robin are hit with a time storm a few pages prior is another example of an art team firing on all cylinders. Simply put, Batman/Superman: World’s Finest #4 is one of the best-looking books on the shelves.

While definitely inspired by classic World’s Finest comics, the character moments balance out the zaniness of the plot in a way that feels more fun than camp. If one can overlook how easily Superman and Batman can just merge into a singular being or how effortlessly Supergirl can travel through time, there’s much joy to be had in this old-school beat-em-up. Writer Mark Waid brings an energy to the plotting and dialogue that makes it easy for readers to gloss over the who, what, where, and why for the sake of an epic that puts a fresh spin on an old format.

Batman/Superman: World’s Finest #4 is easily the best-looking book on the comic shelves this week, and it’s quite the thrilling adventure to boot!