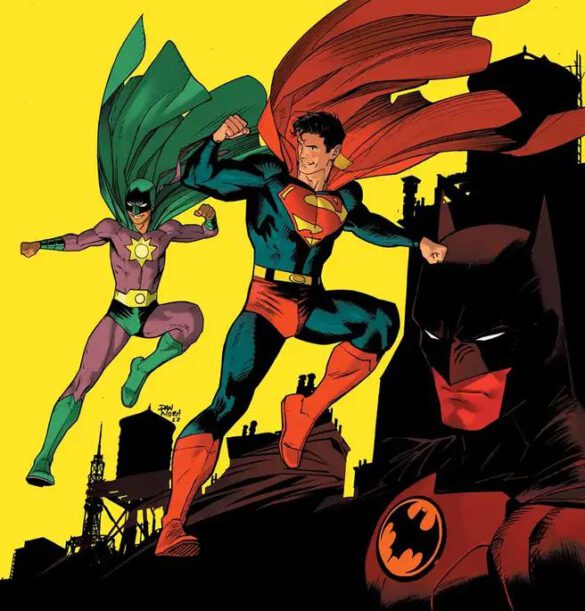 Overview: In Batman/Superman: World’s Finest #8, the Key holds Gotham City hostage, and it’s up to David to learn how to control his powers and help the Justice League.

Synopsis (spoilers ahead): As Batman/Superman: World’s Finest #8 begins, Speedy and Kid Flash test out David Sikela’s powers at the cliffside base of the Teen Titans outside of Gotham City. Robin (Dick Grayson), Wonder Girl, and Aqualad watch as David shows improvement in controlling his powers. While Speedy and Kid Flash joke about calling David “Boy Thunder,” Wonder Girl tells Robin that there’s something off about him.

Later, in Costa Rica, Boy Thunder helps Superman put a stop to an active volcano. Batman contacts Superman via comm, telling him that a Justice League villain known as the Key is attacking Gotham. Batman needs assistance. The Key has locked people in elevators, subways, cars, and more, giving Gotham one giant fear of confined spaces. Batman and Robin would help, but they are trapped in the Batcave.

While Superman and Boy Thunder speed to the rescue, Batman tells Superman that he has a friend working on an antidote to the Key’s psychotropic chemicals that are infecting citizens.

Superman and Boy Thunder first help out at Gotham General. Supergirl joins them. Batman calls in a fire, which Superman flies off to put out. Meanwhile, Batman calls Boy Thunder to another task. Batman sends Boy Thunder to a coal mine, where workers are trapped behind tunnel doors. If David doesn’t hurry, they will die from methane gas.

At the tunnel entrance, Batman tells David to throw a switch. It doesn’t work. Batman then tells David that he will have to use a small amount of his heat power to cut through the door. When David pushes back, afraid of causing damage, Batman tries to convince him to do it as the other superheroes are busy helping out elsewhere.

David flees the coal mine, taking shade under a tree far away. Batman calls in Superman while David has flashbacks to his world being destroyed (in Batman/Superman: World’s Finest #7). David regroups and takes ownership of the situation. When Superman arrives, David has already freed the miners.

In Gotham, Blue Beetle (Ted Kord) arrives with the antidote. Superman picks up Batman, carrying him to a warehouse that Batman has pinpointed as the location of the Key. At the warehouse, the Key has disappeared into a void that Superman and Batman can’t follow.

Back at the Batcave, Batman tells Robin that the Key escaped. Superman asks David about what made him go back, and his response, about not caring if he died in the process, shocks Superman. Supergirl intervenes, telling David about her origin and her difficulty dealing with survivor’s guilt and the trauma of losing everything she knew on Krypton. She tells David that they can talk anytime.

Elsewhere, the Key talks to a shadowy figure that reminds him that he failed to get ransom money for holding Gotham hostage. This figure turns out to be the Joker, who lights up at hearing about Superman’s newest sidekick.

Analysis: Batman/Superman: World’s Finest #8 effectively sets the stage for multiple story threads going forward. First and foremost, it’s a fun, action romp that sees the Justice League taking on a lesser-known DC villain, the Key. While trapped in the Batcave with Robin, Batman directs Leaguers around Gotham, saving as many civilians as possible. All the while, newcomer David Sikela, a boy with powers who watched his home world destroyed, must learn to step up and pitch in.

David is challenged by Batman, and while he first abandons his mission, David shows steadfast resolve and saves workers trapped in a mine. What makes this story interesting is that there are a couple of things going on here. The surface-level story sees David pushing through his trauma of watching his world blown up to assume the role of the hero. However, there are different threads that clue readers into how this setup is more complicated than it seems. Wonder Girl, earlier in the issue, confides in Robin that something seems off about David. At the issue’s end, Supergirl talks with David about survivor’s guilt after he expresses that he stepped up because he doesn’t care if he dies. It’s a complicated theme running in the background of a series with beautiful art by Dan Mora and vibrant, cheerful, and glowing colors from Tamra Bonvillain.

In past issues, writer Mark Waid and team effectively delivered exciting globe and time-traveling adventures that saw all sorts of unique team-ups and character cameos while also introducing a new villain who currently graces the pages of Batman vs. Robin. Those issues were exceptionally fun and struck a different chord from the rest of DC’s offerings in recent months. This storyline in Batman/Superman: World’s Finest #8, however, takes all that classic Silver Age action and adventure and starts to add more subtext and themes. As readers, we can’t quite put our finger on it yet, but Waid is laying down the foundation for something deeply unsettling and haunting, and it’s something more complex than trauma. It’ll be exciting to see where the series goes from here.