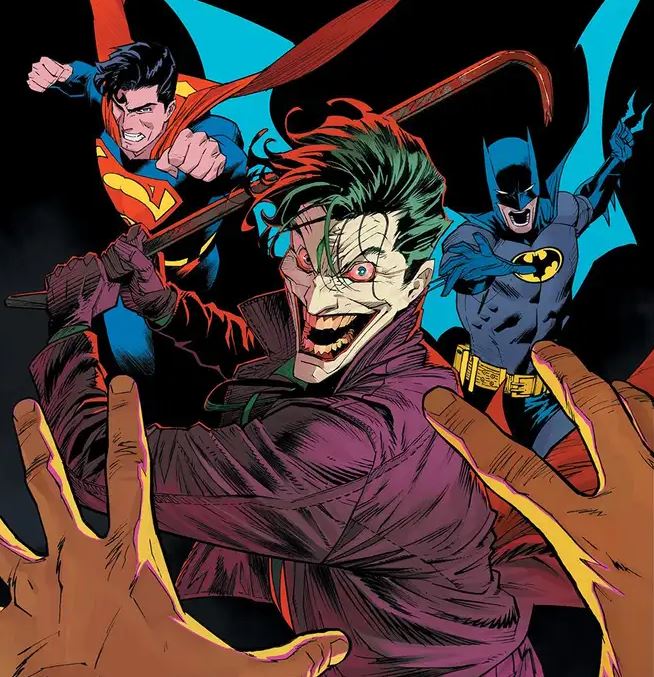 Synopsis (spoilers ahead): Below Gotham City, Batman tracks down Ratcatcher, who is dragging a hostage further into the depths of the sewer system. Batman intervenes, followed by “Boy Thunder.” After David uses his powers to illuminate the sewer, Ratcatcher sends his army of rats. Batman uses sonics to take out the horde.

Above ground, Batman carries Ratcatcher’s hostage. He tells Boy Thunder that David failed to listen, letting his anger get to him and making a scene instead of observing. When David pushes back by highlighting what Superman does, Batman reminds David that Gotham trends darker and that there are twisted minds out in Gotham.

Elsewhere, Joker returns to the Key’s hideout, handing him some sort of device from the Angler (whom Joker murdered). The Key uses this device to open some sort of gateway.

In the Gulf of Guinea, Superman and Flash rescue some sailors who had been thrown overboard. Superman uses it as a way to ask the Flash about training a sidekick, gaining insight from the speedster. After rescuing the men, the two heroes learn that the men were tossed from a tanker, which was raided by pirates.

On the tanker, the Teen Titans put a halt to the attempted piracy. Boy Thunder burns a man, and when the other Teen Titans balk, Speedy encourages the behavior, telling Boy Thunder that he has to hit back hard. Robin and Wonder Girl express their disapproval, with Wonder Girl pointing out how sad David is. She picks up on something deeper and heavier than survivor’s guilt that David is carrying around, and it’s something that he’s not sharing.

Just then, a pirate shoots Aqualad, and Boy Thunder returns fire, zapping the power with ferociousness. Superman arrives, and taking advice whispered by Robin (Dick Grayson), he flies off with David. The two talk tactics, and Superman tells David that he shouldn’t punch down, especially when there were other means to stop the threat. The man could have been killed.

Superman notices David’s heartbeat, and Boy Thunder reveals his role in the death of his parents. His parents had built a bigger rocket, but he didn’t take it seriously, and by goofing around in the rocket, he damaged it. This meant that his parents couldn’t escape their fate.

Just then, a gateway opens in the middle of Gotham City, and water from the Gotham river pours out. It’s a gateway created by the Key (with help from Joker). Joker stands atop a building, laughing while citizens are caught up in tumultuous currents.

Batman chases after, but the Caped Crusader is too late. Joker has already gassed David with Joker toxin.

Analysis: Batman/Superman: World’s Finest #9 thickens the plot with quite a deluge of activity. On the one hand, David’s actions are increasingly violent and erratic, born out of anger and seemingly self-hatred. Though David reveals to Superman his involvement in his own death, there could be even more to the story, something even darker and deeper that Wonder Girl is picking up on.

The action sets are legion in this issue. We get three distinctive events that serve as vehicles to propel the plot forward. First, Batman takes Boy Thunder on a mission to stop Ratcatcher. Then, Superman and Flash save sailors while the Teen Titans and Boy Thunder stop pirates from stealing a tanker. Lastly, Joker and the Key attempt to drown Gotham City, which results in David’s abduction and gassing at the hands of Joker. Suffice to say; it’s an extremely busy issue.

That said, it serves as a wonderful playground for artist Dan Mora, who delivers some excellent action-packed panels and keeps readers zipping along coherently with a mile-a-minute plot. Unsurprisingly, Mora juggles the fast-paced momentum deftly, making it look easy to reduce all of the developments in this issue into an easily accessible, well-paced issue. Batman/Superman: World’s Finest #9 is fun, snappy, and delightful.

The art is enhanced by Tamra Bonvillain, who really gets to play around with colors in this installment. The easy open with a moody, darker sewer scene, and it leaps to action in broad daylight out in the ocean and then back to the thralls of darkness in Gotham City. Bonvillain’s colors are bright and gorgeous and make this book arguably the best one on the stands this week.

Letter Steve Wands deserves major kudos as well, as it can’t be easy to letter for so many characters and give each their own distinctive tone. Wands excels, matching the pacing set by Mora and Bonvillain in mood and tone.

Batman/Superman: World’s Finest #9 is a fun issue. It’s insanely busy, and there are so many plot threads being juggled in the air by Mark Waid, but it works. Somehow, this issue comes together for another exciting installment that continues to barrel toward — something (we aren’t clued in fully yet).

Batman/Superman: World’s Finest #9 is the very definition of excess, and yet, it manages to barrel along at a frenetic, yet enjoyable, pace.