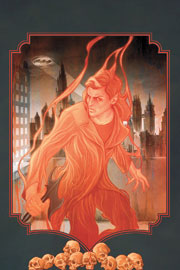 Usually when blood runs red in the streets of Gotham City it's because the nefarious plans of some super criminal has spilled over into the innocent populace and those poor souls end up paying the ultimate price. This time not only are the streets running red with blood but it's being bought in by the trainload!

Joshua Hale Fialkov has brought his I, Vampire series to Gotham and it's not long before it's protector, Batman, becomes involved in the story. Fialkov is no stranger to Batman as has written him in the pages of Superman/Batman comics that are sadly no longer part of the New 52. Now Fialkov is using Batman as a two part prelude to his crossover series with Justice League Dark that encompasses issues 7 and 8 of both series. My thinking is that there is no better way to set up a battle between a lustful vampire army and the darkest of all Justice Leagues than to have it in the dank and haunted streets of Gotham. Who else would you choose to face a vampiric warrior other than the Dark Knight himself. I was eager to see how a match up would go between Batman and Andrew the vampire in this issue. What with Batman being the most human and mortal of all the superheroes and Andrew being undead and essentially immortal. I anticipated Batman having to rely on his superior skills while Andrew would depend on his metaphysical gifts. Two denizens of the dark separated by the worlds they travel in.

Batman gets the drop on Andrew by sticking him with a sharpened batarang. He follows that with a right cross and grabs Andrew by the collar threatening to beat information out of him. Andrew simply apparates and reappears behind Batman putting him in a choke hold. Batman counters with a flash/bang from his utility belt and flips Andrew to the ground and demands to know where the people from the blood train have gone and, by the way, "What are you?" Andrew separates himself from Batman with a kick to the midsection and asks for a truce. Not bad as far as mortal versus immortal skirmishes go. You could call it a draw although you may be tempted to award points to Batman for his quick exit. A policeman's flashlight interrupts things and when Andrew turns around and finds Batman typically gone he muses, "Heh, I like that guy." Anyone that can disappear faster than a vampire deserves some points and give some to Fialov also for that little touch of humor.

Andrew has come to Gotham in search of his love, Mary who is bent on forming a vampiric army. Perhaps inspired by Batman, Andrew turns detective and deduces the undead hoard will be kept hibernating (it takes 48 hours to gestate into a vampire) in some abandoned building large enough to hold them all. Andrew leads his hardy band consisting of John and young Tig to an old Courthouse. Ever the policeman himself, Batman has followed them there ready for a re-match. He learns from Tig that Andrew is a vampire and should be killed. I thought there was a slight misstep here by Fialkov. John steps between Batman and Andrew and calls for a halt. Batman remains unswayed and accuses John of being under the thrall of the vampire. John asks him if he is such a great detective then "detect". Batman is unconvinced and suddenly Andrew appears behind Batman pleading patience. Batman calls him a monster and Andrew retorts, "I've heard the same about you." "Fine, we work together for now." rejoins Batman. What? That's it? An exchange of "Monster" jabs and they are suddenly allies? Maybe Fialkov just wanted to move the story along. He does need to get to part two of this and the larger battle with the Justice League Dark but that seemed a little convenient.

The uneasy former combatants head into an elevator to make the descent to the basement. A natural location to pen up a squirming vampire army since old courthouses had jail cells to keep the incarcerated. Fialkov finds time to inject the scene with a deft touch of humor again. Andrew turns to Batman and remarks, "I like your cape". Who better to make a fashion accessory quip than to the always stoic Batman. It's made all the more clever because vampires have been historically associated with dramatic capes. Funny Mr. Fialkov.

They reach the basement where the bloodthirsty hoard is barely kept at bay by the steel bars of their cells. Andrew inexplicably releases them only to see them surge forward and then suddenly stop at the behest of the vampire, Mary, "Queen of Blood". Points should be awarded here to artist Andrea Sorrentino for this final full page panel. I'm not a fan of her style which looks to be a cross between photo-realistic and impressionism. But if you flip a few pages back when Andrew and his troupe were making their way through the courthouse you'll see a larger wall mural with Justice and her Balance leading an assembly of the faithful. It's mirrored by Mary who is similarly draped in robes of red with hair also wildly afire. She in turn leads a band of the faithful. Two powerful women separated by their own set of truths. Very nicely done by Fialkov and Sorrentino.

In closing, some of Fialkov's writing seemed a little rushed to me but it is the first part of the two issue Batman story arc. As I said before I am not a fan of Sorrentino's drawing style. It does lend itself to the bloodless, soulless look of her characters, appropriate for this book. I just didn't get enough of a Gothic sensibility Gotham needs. Call me old fashioned. Still, a well done overall. Humor amidst the drama is always welcome and a strength of Fialkov's. It makes his undead character of Andrew all the more human.