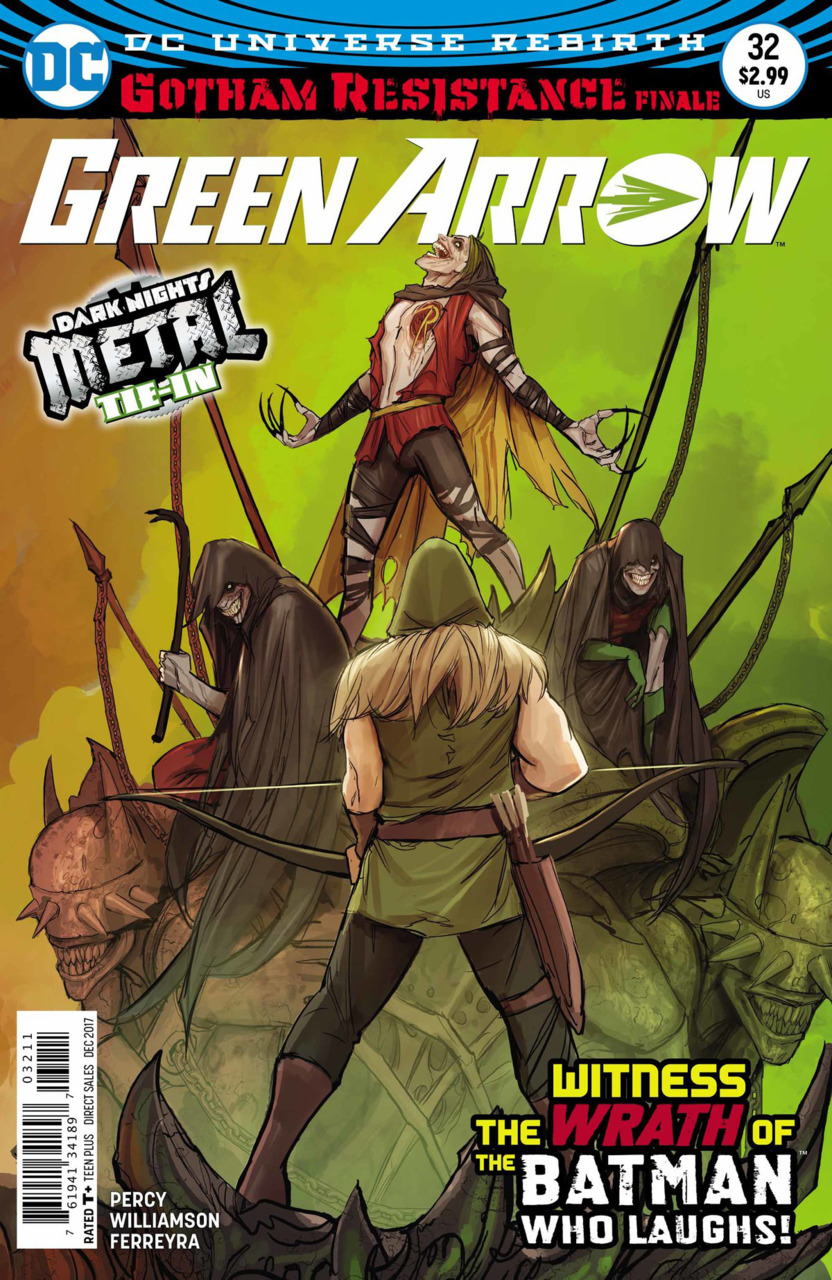 Overview: This summer’s DC Metal event has found its way into the pages of Seattle’s favorite emerald archer, Green Arrow. Oliver Queen has been given strict instructions from Batman and those orders are about to be carried out with some unexpected results thrown in for good measure. Gotham’s had its share of weirdos that have looked like they walked off the set of one of Clive Barker’s Hellraiser films. As a result, it’s taking some members of the Bat-Family and others to come up with a solution to this ongoing fiasco.

Editor’s Note: This issue is part of the Gotham Resistance crossover between Teen Titans, Nightwing, Suicide Squad and Green Arrow which started three weeks ago and concludes with this issue.

Synopsis (Spoilers): The opening of this issue doesn’t waste any time in terms of dealing out the action sequences. Green Arrow’s been tasked to look after Damian Wayne through this crisis by Batman. You see, Green Arrow, along with an assortment of heroes have been assembled to push back the threat from the Dark Multiverse. By Dark Multiverse, I mean the latest threat to Gotham City perpetrated by the Batman Who Laughs.

Green Arrow, along with Robin, Nightwing, Harley Quinn, and the often underrated Mr. Terrific, are up to their eyeballs in Gotham villains who look as if they’ve been injected with steroids. As our heroes venture down another doorway, we learn that there are seven different evil interpretations of Gotham’s Dark Knight. All of these versions spell bad news for the people of Gotham City and there’s some explanation from Mr. Terrific in terms of the seven cards. The seven cards were handed out by the Batman Who Laughs to the villains of this realm who went about to remake Gotham in their own twisted vision. It is here that the laws of physics and science get blurred and blended with forces that cannot be explained. Needless to say, it becomes difficult for even Mr. Terrific’s reasonable mind to discern and murkiness ensues. At one point during this issue, Nightwing begins to have visions of the horrific nature and is able to pinpoint the machine that the Batman Who Laughs has constructed.

We learn through Nightwing’s visions that this evil version of Batman has members of the Teen Titans and the Suicide Squad hooked up to it in order to power it. While the situation looks hopeless on the surface, Harley votes to ditch the whole thing altogether, but Damian has a different take that’s an important step in his development as a character. Robin feels responsible that he’s gotten his team mixed up in all of this and resolves to do something about it.

Our Gotham Resistance is able to locate the machine that’s wreaking havoc. They decide to go all in and formulate a plan to take down this metal monstrosity. Robin’s morality gets tested when he begins to fight a demonic interpretation of himself. With Robin in the thick of it with this demon, Nightwing and Green Arrow are working hard to protect the son of Batman. In the middle of all of this, Harley Quinn succumbs to the Batman Who Laughs temptations and is carried off by demons to be hooked up to the machine. Meanwhile over on Bane’s section of Gotham, Bane sits while his announcer provides color commentary on the events transpiring in front of them. Green Arrow resolves to fire an arrow at the demon that’s beginning to manifest itself through Damian. The only problem is that the demon telegraphed Ollie’s move and is able to shift its body so that the arrow would strike Damian. Green Arrow begins to despair but Robin’s able to turn the negative into a positive by manipulating the arrow to destroy his would be possessor.

Things are looking bleak for our team, but a Hail Mary pass arrives just in time in the form of Dr. Fate. The good doctor is able to push back the evil-doers just long enough for the remaining heroes to get outta dodge and regroup. Robin feels as if he’s failed everyone and Nightwing appears frustrated. But it’s here where Green Arrow is able to mentor Damian in that in the overall big picture, Robin did the right thing by his team by vowing to come back for them and living to fight another day. Green Arrow supports the decisions that Robin made and now the resistance has figured out a way to kill these demonic entities that are plaguing the city.

Analysis: The artwork and the visuals by Juan Ferreyra are an instant attraction for this issue. I felt like the art team stepped up their game here in this issue compared to previous arcs. The creators of this event are fans of the Heavy Metal music genre and for those who aren’t, then many of the references in this issue may fall a little flat at certain points. But to put things a little bit into perspective, this issue reminded me of a horror film crossbreeding with the visual staples of heavy metal music. Leather, studs, copious and repetitive references to blood and metal are all something out of the Adult Swim show, Metalocalypse.

The one part of the issue though that felt a little hokey was when the writers, Benjamin Percy and Joshua Williamson, described the material that made up the demonic machine as Nth Metal. I am sure that it wasn’t a call out to Spinal Tap, but nevertheless, I was able to let it slide in that it’s all in good fun. However, I could see if somebody wanted to draw a circle around that detail and call it into question. I am not sure if the Dark Metal Blade was an accidental minor plot point, but regardless I’m thinking it may be a tribute to one of Heavy Metal’s oldest record labels in Metal Blade Records. This issue felt cluttered and crowded with the abundance of character spotlights to which there wasn’t too much of Green Arrow to go around. It feels as if this blockbuster needs to start making preparations to wind down.

Final Thoughts: This event has been an entertaining ride for sure, but now I’m beginning to look for the exit. While this is an intriguing concept for an event, it’s starting to feel a bit over the top. Don’t get me wrong, it’s been fun. It’s just that it’s gone a little too long in my opinion. I am ready to get back to some good ol’ Green Arrow stories.