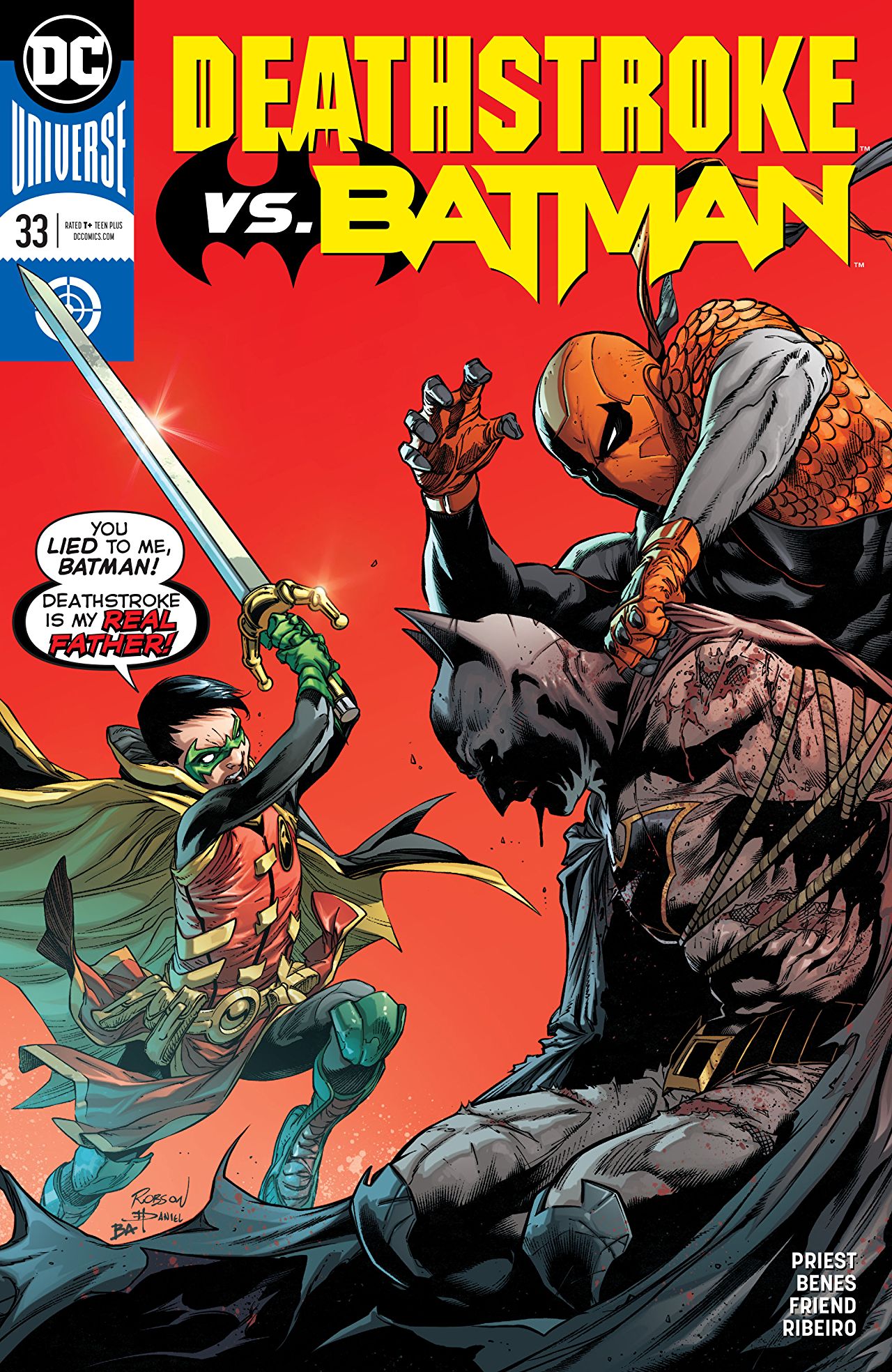 Overview: Robin joins Deathstroke on a cross-country mission as the two struggle to come to grips with their relationship.

Synopsis (spoilers ahead): Just as he did with Rose two years ago, Deathstroke heads across the US on a road trip, wearing the same disguise. This time, however, Damian Wayne, the current Robin, joins him, calling him “father,” and subjecting him to all manner of criticism. He mentions that Red Robin (currently “dead” during his abduction by Mr. Oz after Detective Comics #940) left him a video recorded some years ago declaring Damian to be Slade’s son, not Bruce’s. Slade stops the car and insists that he’s not Damian’s father, threatening death if Damian interferes – and Damian responds that they are very alike.

In Gotham, Alfred and Wintergreen, assistants to Batman and Deathstroke, respectively, meet at night in a park. Wintergreen, on the phone with Slade who complains vociferously about Damian’s presence, especially as he suspects the boy merely serves as Batman’s spy. He recounts that Damian came to him, bowing and claiming to be the son of Deathstroke. Wintergreen tells Slade that Damian is damaged, implying that Deathstroke will need to take care of him, and Slade hangs up. Wintergreen and Alfred hope their plan works.

In a hotel, Robin stakes out the parking lot. He tells Slade to rest, and he will keep watch.

The next day, in Pennsylvania, Damian enters a bike shop and knocks out the owner, Deathstroke’s target. He pulls out the bike shop owner’s gun, and on Deathstroke’s orders, pulls the trigger to prove his loyalty. The gun only clicks, as the owner is actually Deathstroke’s asset, not his target. However, Deathstroke himself is attacked from the shadows by the superpowered Nightshade, the former operative of the Suicide Squad, now freelance intelligence element. They fight over the biological weapon which is Slade’s true target.

In the shop, Robin and Slade’s asset, a former Spyral agent, come under fire of a squad of terrorists, and Robin makes quick work of them. Slade’s promethium sword defends him against Nightshade’s shadow portal powers, but she captures Robin with them as leverage, putting him in the shadow realm, where nightmares dwell. Slade and Nightshade bargain and Slade willingly enters the shadow realm to save Robin, despite his hatred of the boy. Stripped of his composure and iron self-control, Robin turns viciously on Slade, showing his fury at the idea that he might be the son of Deathstroke. Their fight with Slade’s shadow-absorbing sword breaks the hold of shadows, sending Robin tumbling to a possible end, until Slade saves him, spurred by his memory of Wintergreen’s admonition to take care of Damian.

Slade gives Nightshade the key to the bioweapon, and she leaves. Robin shoots Slade in the Ikon armor, still venting his rage, and Deathstroke reveals that they switched the key. The roles now reversed, Robin insisting he’s no son of Slades, but Deathstroke claiming the rights of fatherhood, they fight until Deathstroke believes he understands what is going on, and rockets out of the ice mine where the bioweapon was stashed, leaving Robin angry and confused.

Analysis: After three intense issues of Batman and Deathstroke matching wits (one could even say trolling), Priest takes an important detour to examine the relationship between Slade and Robin. The emotional journey he takes both characters on appears masterfully in the carefully controlled reversal both undergo. Damian begins the issue fully in control, rational, cold, icy, just as Talia trained him, trying to be the son he believes Deathstroke wants. By the end of the story, after undergoing the terrors of Nightshade’s shadow realm, his control evaporates, and his raw hatred of the evil Slade represents, his desperate desire to be heroic and reject the darkness he sees within himself and mirrored in Slade takes over his actions. In contrast, Slade starts the story hating the pesky sidekick, with his superb training and complete arrogance. Unlike his daughter Rose, whose road trip with her acknowledged father Slade two years ago (issue #4) was actually Slade’s twisted, bizarre attempt to spend time with his daughter and try to set her on the right path instead of her then wandering aimlessness, Robin anticipates Deathstroke’s methods and actions, serving as a superb assistant and apprentice – and the fact that Slade had nothing to do with making him that way infuriates him that much more. In the end, heeding Wintergreen’s admonition, Slade saves Robin from potential death by falling from the shadow realm. Priest has said that Slade loves Rose and Joseph dearly, but doesn’t know how to express it at all, and shows Slade here again lavishing what limited affection he is capable of on a substitute for the kids he has but can’t reach. The issue ends on a cliffhanger, of course, with Slade hinting he knows what’s happening with the whole confrontation with Batman. The end text promises a two-issue finale in the Batcave. As these reviews have hinted at for all of this arc, the most likely solution to the conflict is that Alfred and Wintergreen are attempting to reign in their masters by pitting them against each other, hoping they will come away having learned a little about themselves. The next two issues will tell the truth.

Veteran Brazilian DC artist Ed Benes takes over for an issue from Carlo Pagulayan. As Pagulayan required a fill-in artist to finish the last two issues, the substitution of Benes to give Pagulayan time to hopefully complete the last issue of the arc (in two months) solo is a wise choice by editorial. Comparing the art side-by-side with the first three issues, Benes does a better job of fitting in with Pagulayan’s penciling style than the co-pencilers of #31 and #32, Roberto Viacara, whose pencils are much blockier and heavier-lined than Pagulayan’s. Benes reverts to his more spidery lines and delicate details familiar from his days on the classic Birds of Prey title, and the mesh between his style and what came before is excellent (similar to Diogenes Neves on the Defiance arc).

Benes is, of course, also known for his extremely sexy depiction of superheroines (again from Birds of Prey and elsewhere). He gives Nightshade, the classic Charlton character (partially inspiring Silk Spectre in Watchmen) and Suicide Squad mainstay during the brilliant John Ostrander run, a new and very appealing look. She definitely fits into what a reader would expect from Benes, but in addition to her curves, Benes does what Gail Simone’s always praised him for – excellent expressions and acting for the characters. Nightshade’s look of haunted lostness when Deathstroke chides her for threatening Robin’s sanity and life in her shadows is extremely powerful, and the body language of Slade and Robin throughout are brilliant. Unusually, Dinei Ribeiro takes over coloring from series regular Jeromy Cox, but like Benes, Ribeiro meshes extremely well with the colorful but often muted world of assassins and superheroes that Cox has evoked for the last two years.

As usual, Priest provides a brilliant issue, powerfully playing with the reader’s emotions, and providing expert parallels and new context for Deathstroke as a father. Though Robin likely won’t be featured in the two-part finale of this arc, seeing him for the bulk of this issue play off of Slade provided not only endless delights at the friction between the two, but also the kinds of deep insight Priest always provides when he takes more popular characters and features them in this semi-obscure little villain book.

Final Thoughts: Deathstroke vs. Batman heads into the endgame with a brilliant issue exploring Damian’s reaction to the idea that he might be Deathstroke’s son.