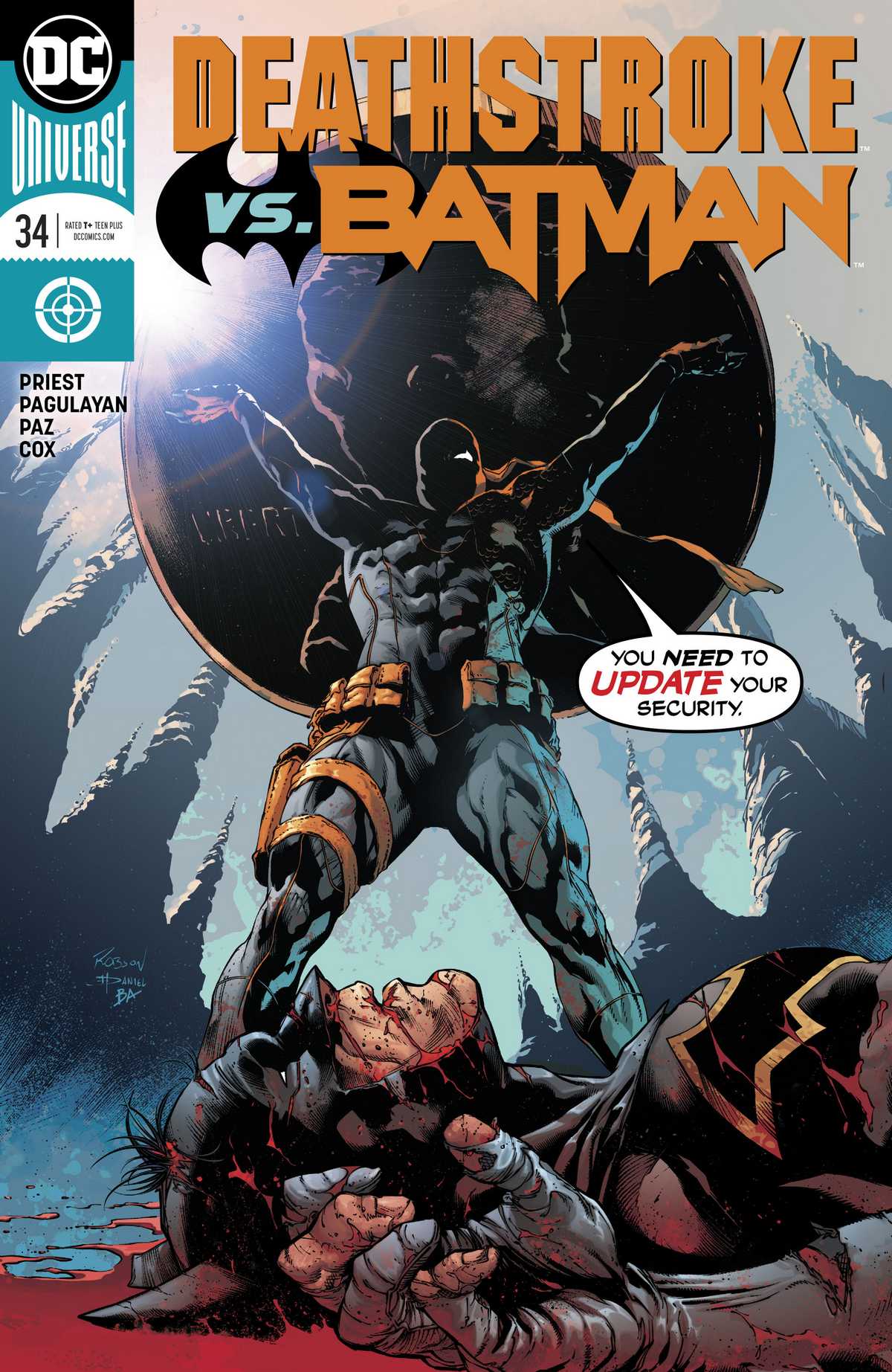 Overview: The conflict between Deathstroke and Batman comes to a head as Slade violently infiltrates the Batcave!

Synopsis (spoilers ahead): The issue opens with a flashback to Slade and Adeline finding Joseph with his throat cut. As Slade attempts to save Joey, Adeline seethes with rage at Slade’s role in her son’s near-mortal injury and shoots his eye out. The scene briefly shows Joey in the present putting on his Jericho suit, then immediately cuts to Wayne Manor.

Bruce, on the phone with one of his employees, discovering the extent of the damage Slade’s computer program has done to his fortunes, leaving him effectively broke. He hangs up, looking down at a portrait of Dick, Jason, Damian, Tim, and Duke. Dick and Damian join him, discussing Tim’s loss (as this arc takes place between Tim’s “death” and return). Damian tells Dick and Bruce about Tim’s video putting Damian’s paternity in question and mentions his trip cross country with Slade, saying that the matter was put to rest. Bruce orders Dick out, then tells Damian that there is no question of Deathstroke being his father, and not to engage him any further. Bruce starts heading to the Batcave, but Slade steps out from behind the grandfather clock, holding a pistol to Bruce’s head.

At Wayne Enterprises in Gotham, Jim Gordon watches in puzzlement as the FBI raids the company. Joey, as Jericho, uses a janitor to confront his mother, Adeline, who is overseeing the raid. Adeline says it’s all because of Waynetech’s new phone and sending Batman after Deathstroke was just a bonus. Joey tries to get her to see that involving Robin is just as bad as what Slade did to him when he was Robin’s age. She dismisses him as Jim walks in.

As Slade stands with his gun to Bruce’s head, he explains how he discovered the Batcave – the way the roads were re-created to support the Batmobile left a chemical signature. Dick and Damian, outside the library, hear Slade’s voice, but Bruce orders them to leave, as Slade makes it clear he’ll kill them if they get involved. The boys head outside, arguing about strategy, but Alfred and Wintergreen arrive, telling them to stay out of the matter. Then the FBI arrives to raid the manor, having satisfied themselves at the company (or simply ordered more agents). Wintergreen and Alfred are startled by the intrusion, and Wintergreen makes a call to someone he claims can stop the problems.

Slade takes Bruce down to the cave, saying that he intends to end the fight between Deathstroke and Batman by leveraging Bruce as Batman’s chief supporter. He refuses to speculate on whether Bruce himself is Batman – but reveals that he knows Robin is Batman’s son. The lights go out, and when they come back up, Deathstroke and Batman appear locked in mortal combat, each wearing an older version of their costumes – Slade because of Batman’s gauntlet counter to his Ikon suit (see issue #32), Bruce because that’s what was quickest in the cave. They trade blows and psychological attacks, analyzing each other’s backstories and weaknesses, expanding their attacks to include their sons. Batman reveals he hacked all of Slade’s accounts and donated the money to charity. Deathstroke counters that he froze Wayne’s accounts to blind him while he attacked all the assassination marks Batman hid to shut down Deathstroke’s business. As they close in a final, frenzied exchange of blows and taunts, they come together, then collapse, Slade badly beaten on the head, Batman with a knife in his gut.

Analysis: When the Deathstroke vs. Batman crossover was announced at the beginning of the year, many probably expected six issues of what we get in this issue – a full-on, no holds barred beatdown between the world’s deadliest assassin and the world’s greatest detective. Priest had other plans, giving us plenty of brutal action, from the airborne attack in the first issue, to the hovercar chase in #32, to the extradimensional conflict with Nightshade last month, but this issue, he pulls out all the stops. The battle royale between Batman and Deathstroke in the Batcave has all the hard-hitting action we saw in Tony Daniel’s New 52 run, but instead of a more traditional rooftops brawl, Priest and artist Carlo Pagulayan have the two foes rampage all over the Batcave, using the gadgets and geography scattered all over the familiar and beloved lair to powerful effect. However, since it’s still Priest writing, it’s not a silent battle while Deathstroke internally monologues, as he did during Daniel’s run. Instead, the two lash out at each other verbally, probing each other for psychological weakness. Deathstroke comes out a bit better in that respect, provoking Batman to a berserk rage out of love for his son.

Speaking of which, for all the fuss kicked up by fans of Damian Wayne, the issue of his paternity still isn’t fully settled by the end of this issue. Though this reviewer has ZERO expectations that Slade will turn out to be Damian’s father, Priest has said many times that he tried to keep the outcome open as long as possible, though, at this point, he has to know, which perhaps explains his silence on his blog for the past several months. Whatever the reaction by fans, the reaction in terms of sales has been explosive. Instead of the small 17,000 issues per month that we got at the end of the Chinatown arc (the two-part conclusion to the Defiance storyline), Deathstroke vs. Batman has consistently sold more than 35,000, catapulted into the range of successful solo series – even growing instead of the expected shrinking sales. As a result, the next arc, Deathstroke: Arkham was announced to start in October, picking up where Chinatown left off, with Deathstroke delusional and imprisoned – but in the worst possible place, Arkham Asylum. As DC Nation #3 reveals, Priest has been researching Grant Morrison’s take on the madhouse to prepare for the next leg of Slade’s journey. Hopefully, many of those who jumped aboard for this crossover arc will stay for what’s next!

In addition to the absolutely brutal fight that takes up the bulk of this issue, Priest also continues spinning the many plates of this plot – Adeline’s plots against Batman and Deathstroke, the involvement of both men’s sons – Dick, Tim, and Damian for Bruce, and Joseph for Slade – and above all, the British support staff of Alfred and Wintergreen, whose plots continue to weave behind the scenes without revealing their ultimate goal. Priest has said that Bruce loves Damian so much that he considers his son like his own heart – but can’t say it. The scene where Bruce orders Damian to avoid Deathstroke, and that there is no doubt about his parentage communicates this conflict and love beautifully, showing again why Priest has developed a small but intensely loyal following. The ability to pull off a moment of such emotional intensity is rare in comics, and Priest does it time and time again. A small problem appears in the use of two full pages to retell Joey’s kidnapping and Slade losing his eye to Adeline, something we’ve already seen early in this run, and probably could have been done in one page, but Pagulayan’s lovely pencils help the sequence to avoid feeling dull and retreaded. Additionally, after the fill-in sequences from issues #31 and #32, and the completely fill-in issue by future Deathstroke: Arkham artist Ed Benes (of Birds of Prey fame), it’s nice to see Pagulayan handle full penciling duties again. Hopefully, he’ll have enough time to finish the second part of the finale with equal polish and ferocity.

Final Thoughts: Priest and Pagulayan powerfully set up the finale of the Deathstroke vs. Batman arc with pounding action and devastating mind games.