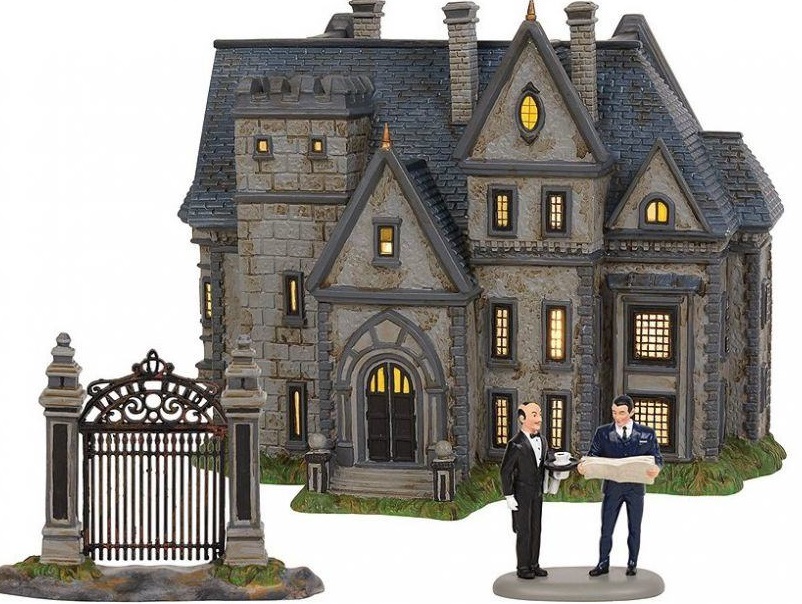 Department 56 has released details for their latest DC Comics Village items, which features Wayne Manor, Batman, Robin, Joker, Catwoman, and more in miniature form. Specific pricing details can be found below as well as additional information for each item. They are expected to ship between March and July 2020. You can preorder yours at Entertainment Earth by following the links below. To the Batmobile, Robin… or the Batcave. You get both in this incredible DC Comics Village Batman Batcave and Batmobile Statue from Department 56! Modeled after the classic 1960s Batman TV series, the set is meticulously handcrafted of porcelain and plastic, and hand-painted. The Batcave measures about 11-inches wide x 6 1/2-inches long x 4 1/4-inches tall and features LED lighting! You gotta get one of these! Figures sold separately. Requires 2x “C” batteries.
Price: $124.99
Release date: March 2020
Preorder at Entertainment Earth He’s the Caped Crusader, the Dark Knight, the Scourge of Gotham’s Underworld – he’s the Batman. But the crime-fighting alter ego of Bruce Wayne is scarcely seen without his trusty sidekick Robin, the Boy Wonder, which is why they both appear here in this DC Comics Village Batman and Robin Statue. Meticulously handcrafted of resin and intricately hand-painted, the Dynamic Duo are modeled after their classic appearance in the Golden Age of DC Comics. They measure about 2 3/4-inches tall x 2 1/2-inches wide x 2-inches deep. Add them to your DC collection while you have the chance!
Price: $32.99
Release date: March 2020
Preorder at Entertainment Earth Looking for the purr-fect little Catwoman figurine to display on your desk? Here she is! Made of polyresin, plastic, and stone powder, the DC Comics Village Catwoman Statue stands approximately 2 1/2-inches tall, with a whip in hand and mischief in mind. Don’t let her get away!
Price: $22.99
Release date: July 2020
Preorder at Entertainment Earth Watch out! The Joker has you in his sights and he’s throwing cards as weapons! This terrific DC Comics Village The Joker Statue measures roughly 3 1/4-inches wide x 3-inches tall, perfectly sized to sit on your desk. The Clown Prince of Crime is made of paper, polyresin, and stone powder.
Price: $27.99
Release date: July 2020
Preorder at Entertainment Earth