Derek Fridolfs has been a busy person, writing a digital exclusive for DC Comics that releases once a week. Batman: Arkham Unhinged bridges events inside both Batman: Arkham Asylum and Batman: Arkham City, as well as adding to the events in the game as well. IGN caught up with Fridolfs and tried to learn a little more about the digital series. 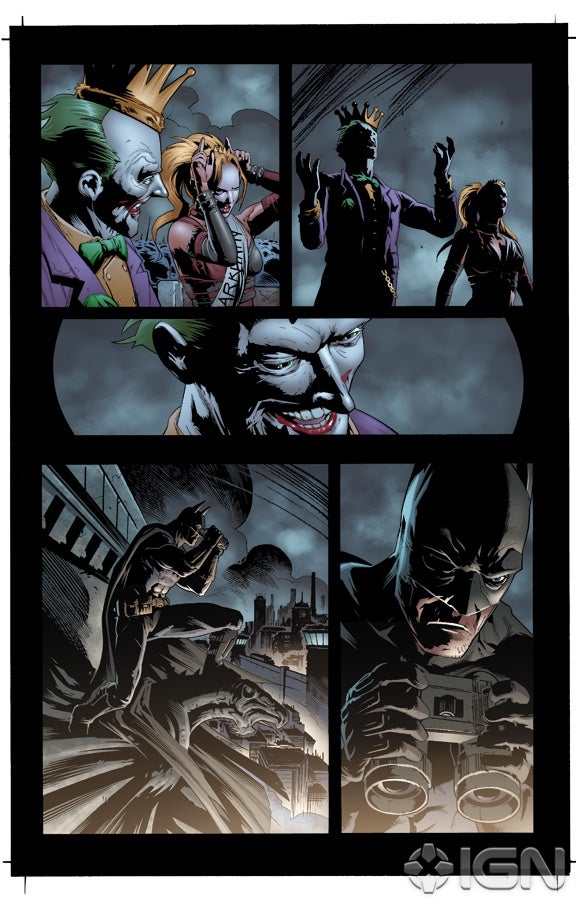 IGN: Can you start by telling us a little bit about Arkham Unhinged and where it fits into the Arkham Asylum/Arkham City timeline?

Derek Fridolfs: The idea behind the two Arkham games that WB, DC and Rocksteady have put out is one continuing story. Starting back in the first game, after Batman delivers Joker to Arkham, only to get locked inside and having to face some of his worst enemies. He discovers the creation of the Titan drug that Joker gets a hold of. And after the ending to that game with the riots in the Asylum, a year has passed and Mayor Sharp is able to convince the city to section off a part of Gotham to become its own walled in penitentiary for inmates to inhabit and run free as long as they never try to leave.

To essentially take all of the main criminal threats in Gotham (transferred from Arkham Asylum and Blackgate Prison) and contain them all in one area, to keep Gotham City safe. Not the smartest of ideas. And Batman knows this and decides to go find out what is really going on inside. That Hugo Strange is involved pulling Mayor Sharp's strings, and there is even a greater endgame that has yet to take place.

As far as the timeline, the Arkham City comic mini-series as well as the Digital Exclusive chapters, took place after the ending to the first Arkham Asylum game. That takes place in the months leading up to the formation and opening of Arkham City.

Arkham Unhinged has its first two story arcs as a lead-in to how Catwoman and Two-Face arrive in the game (just before the start of the game itself). And from there, Unhinged has the luxury of being able to jump all around to tell various stories in the Arkham-verse. This is our chance to tie-in ideas from the first Arkham Asylum game, flashbacks to stories that take place months or years before that, as well as stories taking place during the current Arkham City game itself.

Something we always try to keep in mind, is that the Arkham City game takes place over one long night. But there's a lot of ground to cover during that night as well as leading up to it and also we'll eventually be able to cover stories and ideas that take place following the "ending" of the game.

IGN: What's next for Arkham Unhinged?

Derek Fridolfs: One of the first sort of flashbulb story ideas I had when I first started working on Arkham Unhinged will be coming out soon. It was one of those things that just sort of came to me when Rocksteady released info and pics to all the various Batman skins you could play in the game. And it just got me thinking… how could I make all of them work in an actual story that made sense? How could all these versions of Batman be in Arkham City? So that comic should be coming out soon, drawn by Pete Woods who did an amazing job drawing Batman in various styles.

Also we're going to have the origin to the Abramovici Twins. They were the once-conjoined twins, that if fans remember, are actually working for different bosses in the game. So how did these brothers get separated and go to work for rival inmates? There's some interesting characters that crossed their path before they ever arrived in Arkham City.

And we'll also have some other stories upcoming with Killer Croc, Mad Hatter, the girls in the game, and get a chance to see more of Batman's supporting cast (Robin, Nightwing, etc). And much much more.

For the entire interview, including talk about the digital aspect of comics, head over to IGN. The digital exclusives of Batman: Arkham Unhinged release every Tuesday.