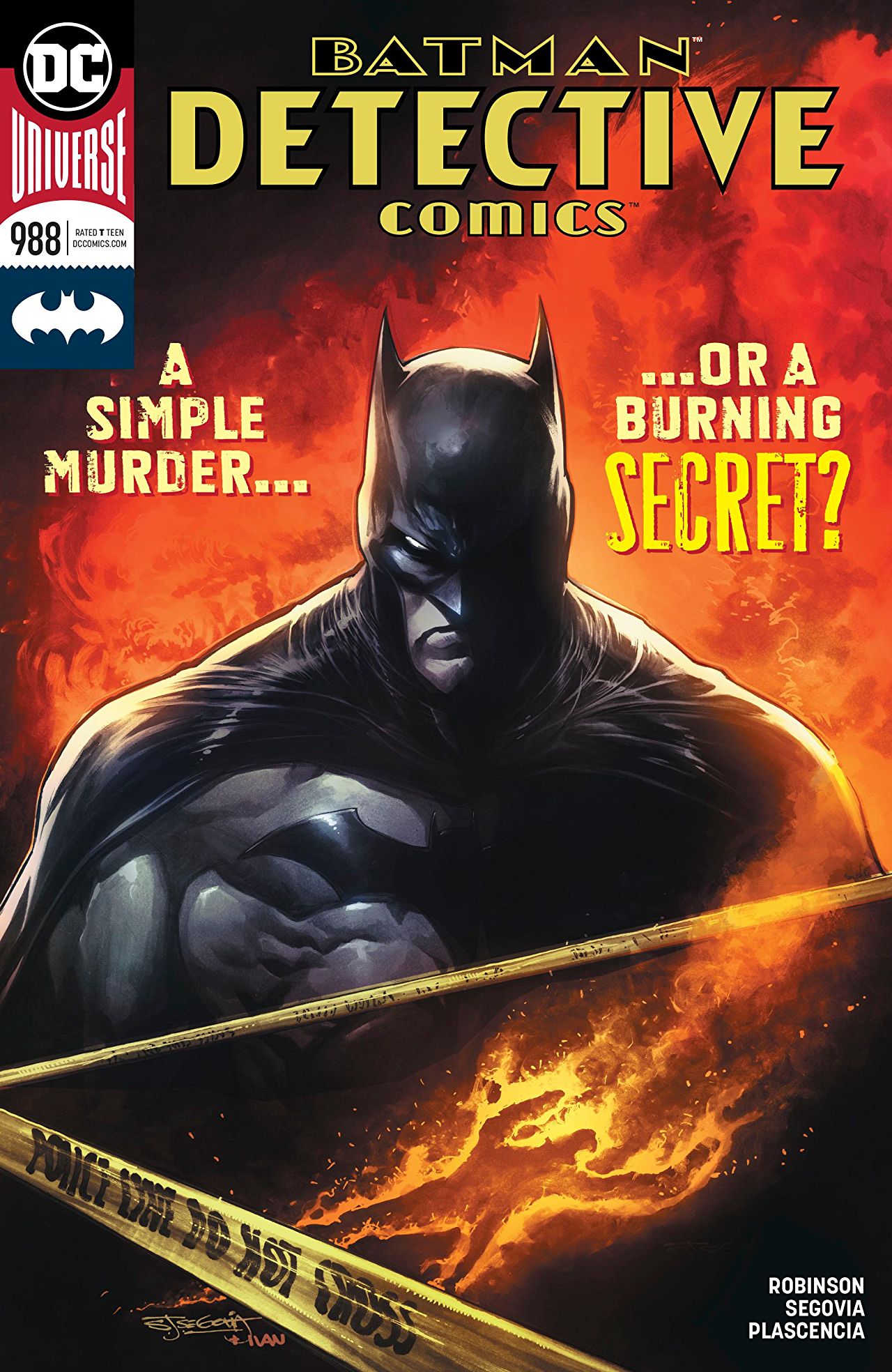 Overview: Bruce investigates a murder to distract himself from Selina.

Synopsis (spoilers ahead): Looking down on a dead man, both Jim Gordon and Batman assess the crime scene. Jim is surprised Batman is at this “simple” murder. Batman responds that due to things going on in his life, he could use a “normal” case to relax. He is the world’s greatest detective, and he needs to get back to his roots. With his curiosity satisfied, Jim shares that the victim’s name is Harold Frank.

Leaving the scene to visit Frank’s apartment, he states to himself although the body is staged to look like a mugging, there are in fact two different entry wounds. He was shot by two different guns. Batman radios Alfred, who asks sarcastically if they are on speaking terms again. Since Bruce’s wedding – imploded, he has isolated himself from the rest of the family. Alfred responds he is proud of Bruce for not letting the wedding break him. Bruce thanks Alfred for his encouragement, but acknowledges that now is not the right time for that, they have a murder to solve.

Alfred shares that Harold Frank was an unassuming kitchenware salesman. After sharing more background on Frank, Alfred mentions that the coroner’s report was just filed and Frank was shot by two guns. Batman responds he already knew that information and is at his residence now. After searching the entire house, he mentions that found a secret room. Before he could really investigate Frank’s secret area, Firefly surprises Batman.

Batman tells Alfred that he is actually fighting Lady Firefly, a protege of Ted Carson – the Firefly. He shares that the building Frank was in is on fire. He postulates that since the building is burning faster than expected, Lady Firefly is distracting Batman so Firefly himself can torch the evidence. Bruce quickly and easily defeats Lady Firefly and Firefly.

On a rooftop far away, two agents of Kobra discuss Frank’s death. Because of the information that Frank sent them, they can finally revive Kobra.

Analysis: Detective Comics has had some of the greatest writing in all of DC Comics since Rebirth. However, this issue bucked that trend. It is the worst issue of Detective since the DC Rebirth began.

James Robinson really struggled to have the right voices for the characters in this issue. Something about Bruce did not seem right. There were many clunky exchanges between Batman and both Jim and Alfred. This issue could have been extremely good if the dialogue was better. We have not had a tried and true murder mystery in a long time; it is nice seeing the World’s Greatest Detective actually be a detective.

However, I do appreciate how Robinson is one of the few writers to acknowledge what Tom King is doing in his run over in Batman. This story shows us how much Bruce is struggling with his breakup. It makes sense that he would isolate himself away from the Bat-Family, but I was pleasantly surprised he was so candid about his life to Jim. It is nice to know that Bruce is human, and not a machine.

The art was fantastic; it really saved this issue from receiving a lower rating. Ivan Plascencia is one of the better colorists in the industry, and he did not disappoint in this issue. I was a fan of Batman’s Rebirth suit, but the classic costume looks so amazing in this issue. This suit allows the artist to have Batman actually hide in the shadows, and there were a couple of scenes Stephen Segovia used this effect.

Final Thoughts: Hopefully, Robinson is able to clean up the dialogue a bit before the next issue.