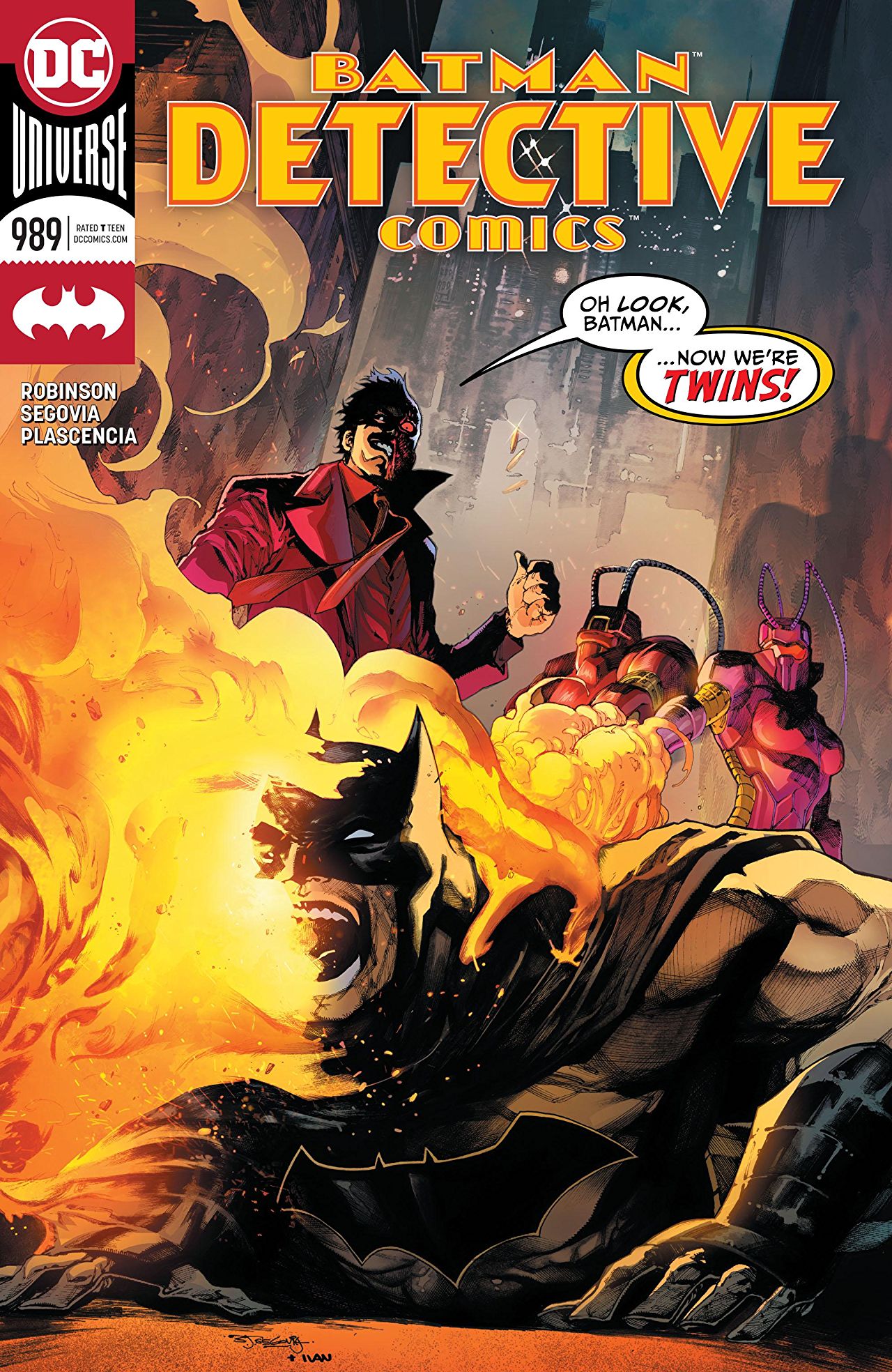 Overview: To take his mind off of recent heartbreak from other titles, Batman is taking a back to basics approach. He’s trying to solve what appears to be a simple homicide and even takes a more forthcoming approach in his relationship with Commissioner Gordon. Despite initial appearances, it soon turns out the “simple homicide”, is not as simple as it initially appeared.

Synopsis (spoilers ahead): Batman follows some leads and runs into a Firefly duo and then Tweedle Dee and Tweedle Dum. Noticing the continued motif of “two”, Batman deduces that Two-Face is behind this. When Batman confronts him, Dent reveals that the mystery is all the fault of Commissioner Gordon.

Analysis: I have zero complaints about Stephen Segovia’s art. The comic opens with a spectacular double-page spread of the Batcave, with a few Batmobiles from different movies depicted. What’s there to hate? The pencils are great and every character looks their best. Ivan Plascencia’s colors compliment Segovia’s work well. I have to say, I’m loving this team.

The cover is great too. While the scene depicted on the cover doesn’t exactly occur in the issue, it’s still an interesting action piece. It even includes dialogue balloons, an abandoned practice that I think needs to make a comeback.

James Robinson does a great “back to basics” type detective story, which is a welcomed change after all the mega-storylines running through the Bat-Books. As much as I loved the last few years of “Detective Comics”, there hasn’t been much detective work in the title. It’s also a fun read. Having Alfred say “So the murdered man was posing as another murdered man,” right before a silent panel of him sipping his tea made me grin. It’s almost as if the CSI theme song was about to begin any second.

The cliffhanger for the last issue had me concerned. I didn’t want the terrorist organization Kobra in what I thought was going to be a down to Earth detective story. They didn’t show back up here, and the inclusion of Two-Face makes more sense. Nonetheless, I’m hoping their eventual return doesn’t overcomplicate the narrative.

We once again see Bridget Pike, the female Firefly, in this issue. This arc is her first comic appearance, as she is a character created for the “Gotham” television series. I’ll be honest, of all the “Gotham” characters to be brought into comic continuity, I’m surprised she was chosen. I don’t have anything against her, but she’s very unspectacular on “Gotham”, and her role here isn’t essential. My money was always on someone like Fish Mooney or a revamped Barbara Kean being brought in, but I suppose Bridget isn’t doing any harm.

Final Thoughts: A great “breather” or “back to basics” tale of Batman being a detective. The art is splendid and the dialogue is fun. I hope the rest of the arc continues with the momentum.