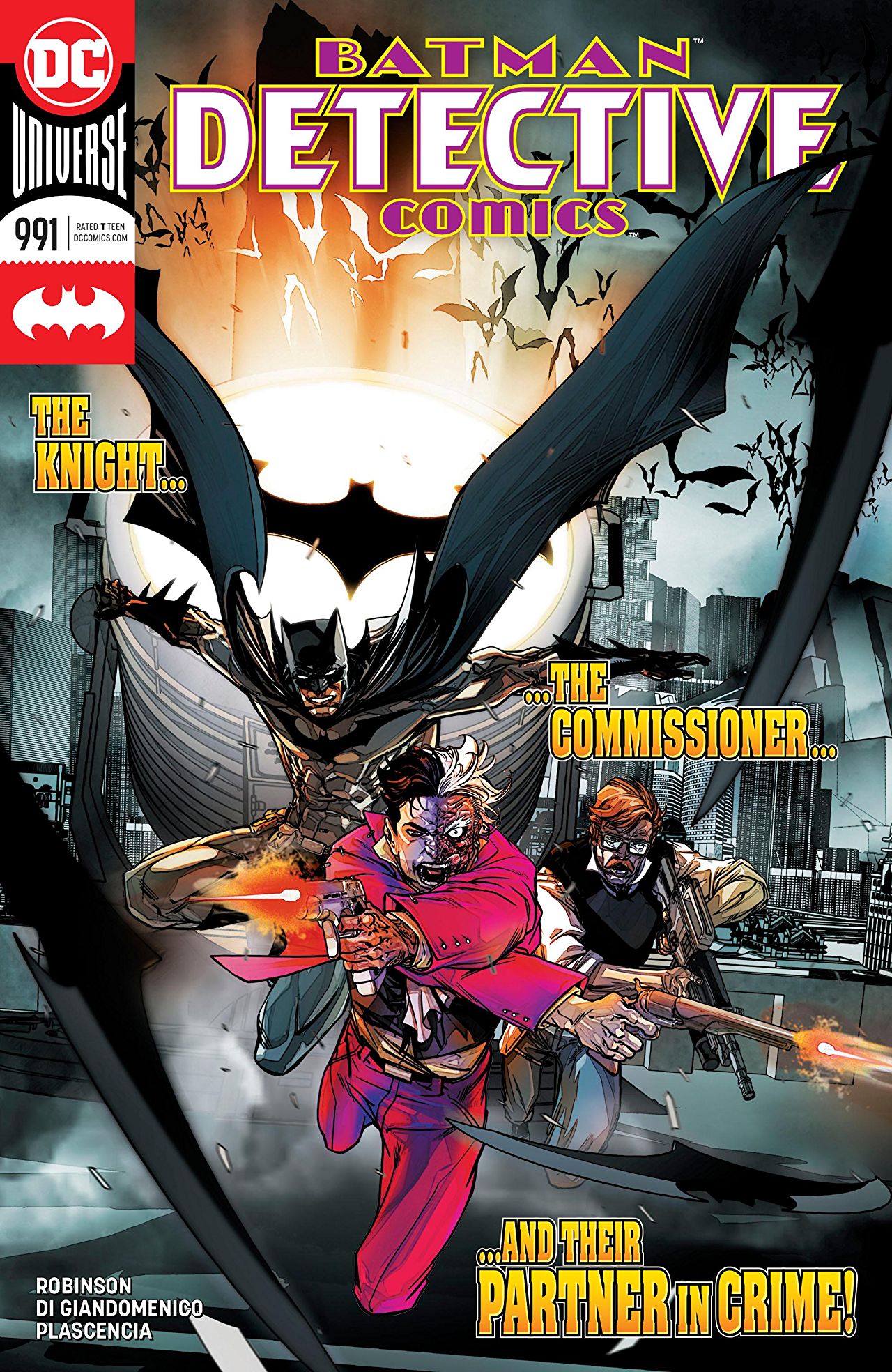 Synopsis (spoilers ahead): At the roundtable, Batman asks Two-Face if they are about to fight. Two-Face says it would be futile; they both know what the outcome would be. He tells Batman to come outside where the air is fresher, and he can answer Batman’s questions.

Batman does not need to ask many questions because, after this entire ordeal, he figured out what has been going on. Batman knows Two-Face killed Karl Twist, who was a terror strategist known as “Harold Frank.” He was directly linked to Harvey Dent before he was transformed into Two-Face. Batman asks him what he gets out of this entire situation.

Two-Face states Bruce has an erroneous first assumption – Two-Face did not kill Karl Twist. Batman states there were two different bullets, guns, and Fireflies. This all points to Two-Face.

Right before Two-Face shares who killed Twist, Gordon bursts into the room. Two-Face, now flabbergasted, jumps off the side of the building because Batman lied about coming here alone. Batman politely tells Gordon he will be right back, and he retrieves Two-Face.

Two-Face continues where he left off – He did not kill Twist, Harvey did. Harvey killed Twist because he was the one man he could not convict when he was the district attorney. Two-Face created a cover-up so that he (Two-Face) can be the bad guy. Harvey must be good and he must be bad, and if that is not the case, then all of this (including his existence) is meaningless. There must be a dichotomy. He saved Gordon and the GCPD during Kobra’s attack because this fight was instigated by Harvey. All Two-Face was doing was making sure Harvey’s ledger was in the black.

Batman states even though Two-Face has tried to stop and reverse any actions Harvey started, Kobra is still out there. Kobra saw Karl Twist’s plans, and they will follow through with them. Gordon tells Batman and Two-Face that the captured Kobra soldiers all had neural bombs implanted in their skulls. All but one went off, leaving only one mentally capable Kobra soldier to interrogate.

This prisoner tells Harvey Bullock that Kobra has kept to the shadows for too long. Their numbers are waning, and many of their acolytes are defecting for Leviathan. They need to remind the world of their power and strength. Who are Kobra’s greatest foes? Checkmate. But, Checkmate is no more. However, Batman – if they waged war on Batman and defeated him, Kobra will be glorious once again. After saying this, his bomb went off, and he died.

Gordon asks Two-Face if there is any more information about Kobra and their intentions he could share with them. Two-Face tells Gordon and Batman that Kobra is planning on hitting five locations in Gotham. With that, Two-Face grabs a map of where they are planning to hit, and he and Batman leave in the Batmobile to stop them.

Analysis: I can definitively say this issue is better than the last. It might possibly be the best during Robinson’s arc. That said, it is still a VERY weak issue. Basically, this entire issue is explaining who was behind Twist’s death. Frankly, it is one of those moments you see on television where the entire reasoning for the villain is revealed. This issue is not really original in terms of plot.

I also like the premise of Two-Face’s actions. Dent killed somebody, but he cannot be the “bad guy.” For a man whose very existence is one who struggles with his good and bad side, it would be a huge ordeal if his good side is not good. His identity would crumble, and Two-Face does everything he can to restore the natural order of things. I may not like Robinson’s take on Batman, but I feel he has a good grasp of Two-Face’s voice.

One of the funniest moments though was when Batman told Gordon to wait a minute while he retrieved Harvey. Gordon just leans against a wall and smokes a pipe.

On our Discord server (everyone should check it out), a few of the staff and other readers have disagreed about the art in Robinson’s arc. Personally, I liked Segovia’s work. It is definitely different though. I really liked the work of Carmine Di Giandomenico in this issue. It feels more realistic that Segovia’s work.

Final Thoughts: This issue is the best of the arc. But, it falls short of the excellence Detective Comics demands.