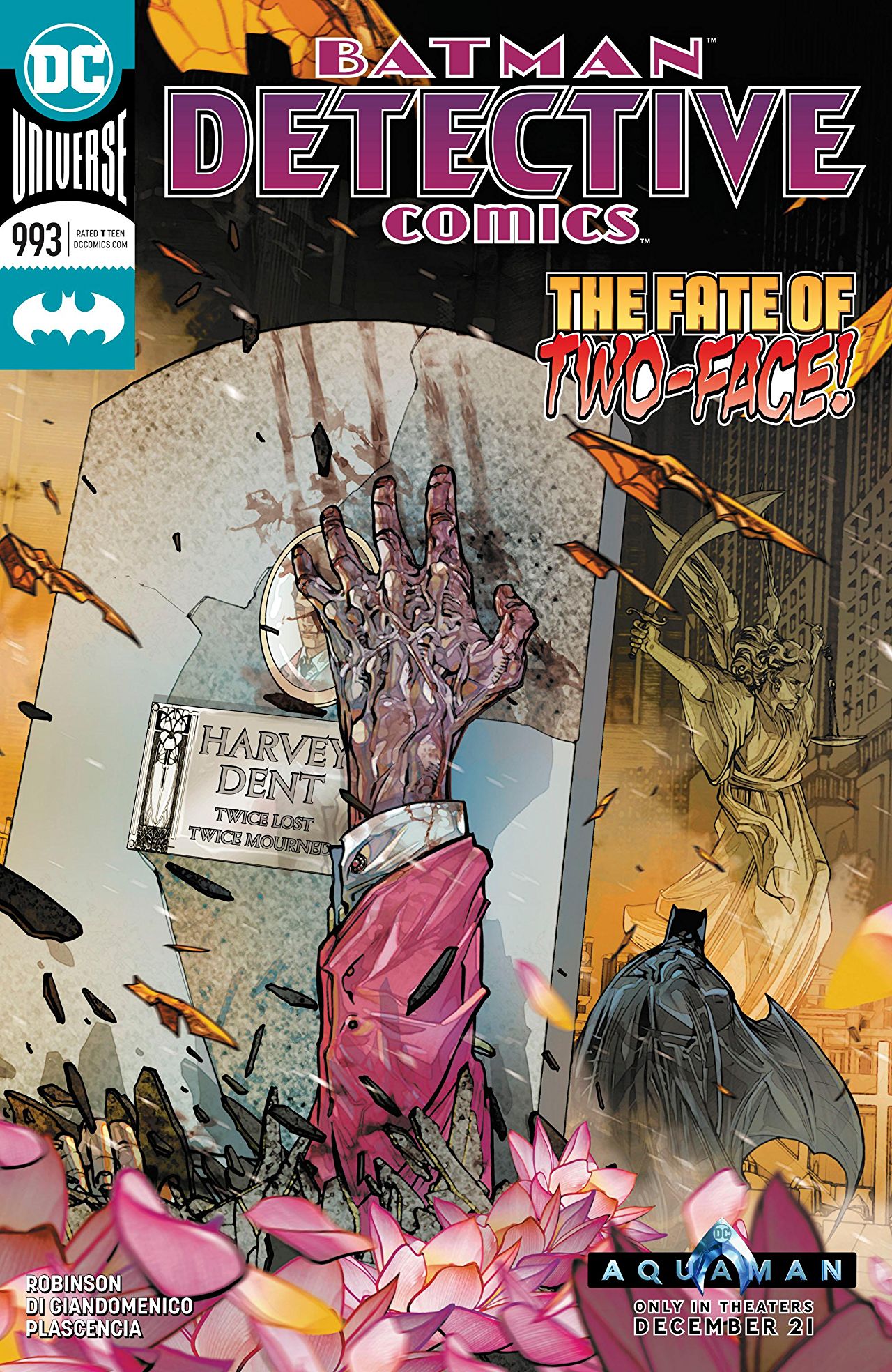 Synopsis (spoilers ahead): “It’s no secret to the world at large — certainly not the people of Gotham that Two-Face is dead.” As the priest continues his eulogy, Bruce, Gordon, and others stand around the grave, taking in every spoken word. He says Gotham has enjoyed learning one of their most notorious villains has died, and although that may be true, Gotham also lost one of their heroes — Harvey Dent.

The priest tells the crowd when the moment came, Harvey sacrificed himself for the greater good. When Kobra threatened Gotham by poisoning their water supply, Harvey immediately partnered with Batman to stop this criminal act.

In a flashback, the camera shows what happened the night Dent died. Harvey and Batman entered the sewers, searching for the Kobra cult. Batman warns Harvey if the chemical agent reaches the water, then there is no way to stop this mind-controlling agent. Kobra will have immediately won. There is a way to stop this agent — heat. Fire, steam, really anything hot will do as a way to neutralize this threat.

At a two-way junction in the sewers, Harvey and Batman split up. In his search, Batman stumbles upon Kobra. He disarms these minions and tries to rejoin Harvey, but Harvey has his own mission — to find the chemical agent. Batman tries to warn Harvey to no avail. Harvey jumps headfirst into their staging area. Right before Kobra is able to dump the chemical agent, Harvey shoots a pressured valve on the device, and the entire sewer erupts in flames.

The priest asks the attendees if Harvey Dent is a hero. He most was certainly, for at least for a moment.

Bruce, from his office at Wayne Enterprises, receives a call from Alfred. Alfred is a bit surprised he is there; he assumed Bruce would want to return to the manor after the funeral. Bruce states he has work to catch up on since he is not there very often. Also, the work is pretty mind-numbing, a good distraction for a man grieving his childhood friend. Alfred states Kobra was defeated and the gas was neutralized, there is a silver lining in all of this. Bruce agrees Kobra was defeated, but he refutes the claim the gas was neutralized. Bruce also states that Dent’s “sacrifice” was none at all; Harvey faked his death.

In an airport hangar, Batman tells Harvey, who is accompanied by the Fireflies, the agents of Leviathan are not coming. Harvey, surprised, asks how he found him. Batman shares Dent had the Fireflies released for their help disarming the bombs. He knew something was up, most likely that Dent needed Carson’s help with the fire. He needed his help to survive the fire but appear to have been killed. Harvey admits that at the moment, he had to take his chance to escape. He says it could not hurt to help Leviathan sense they are on the rise. Bruce states all he had to do was monitor Carson, and he would lead him straight to Harvey. Thankfully, he already planted a tracker on Carson during their first fight.

Batman warns the Fireflies they should disengage and flee. Carson tells Harvey he is sorry, and he and Pike leave. Harvey admits he would have done the same.

Leaving Batman and Harvey alone, they prepare for a fight. This old game, the Batman vs Two-Face, is afoot again. As Batman jumps down to arrest Harvey, he admits he is thankful Harvey is still alive. Harvey shoots at Batman and says he is happy he is too.

Analysis: The first time I read this issue, I was furious. This entire six-issue arc ends with Bruce and Harvey in a gunfight for old time’s sake? When I reread it, I understood why it ended this way, as it is the only way for this arc to end. The smart thing was for Robinson to end it last issue. He had spent five issues dealing with Kobra and their bombs. In one issue, Robinson dealt with Kobra’s mind-controlling agent and Dent’s apparent death. Too much occurred in this one issue, and it does not fit the theme of the previous five issues. It seems Robinson had no good or clear way to end this story, and thus he just had Batman and Harvey fight each other.

In two weeks, Tomasi begins his Detective Comics run. We will have good art and story for his run, instead of just good art as we saw for the previous six issues.