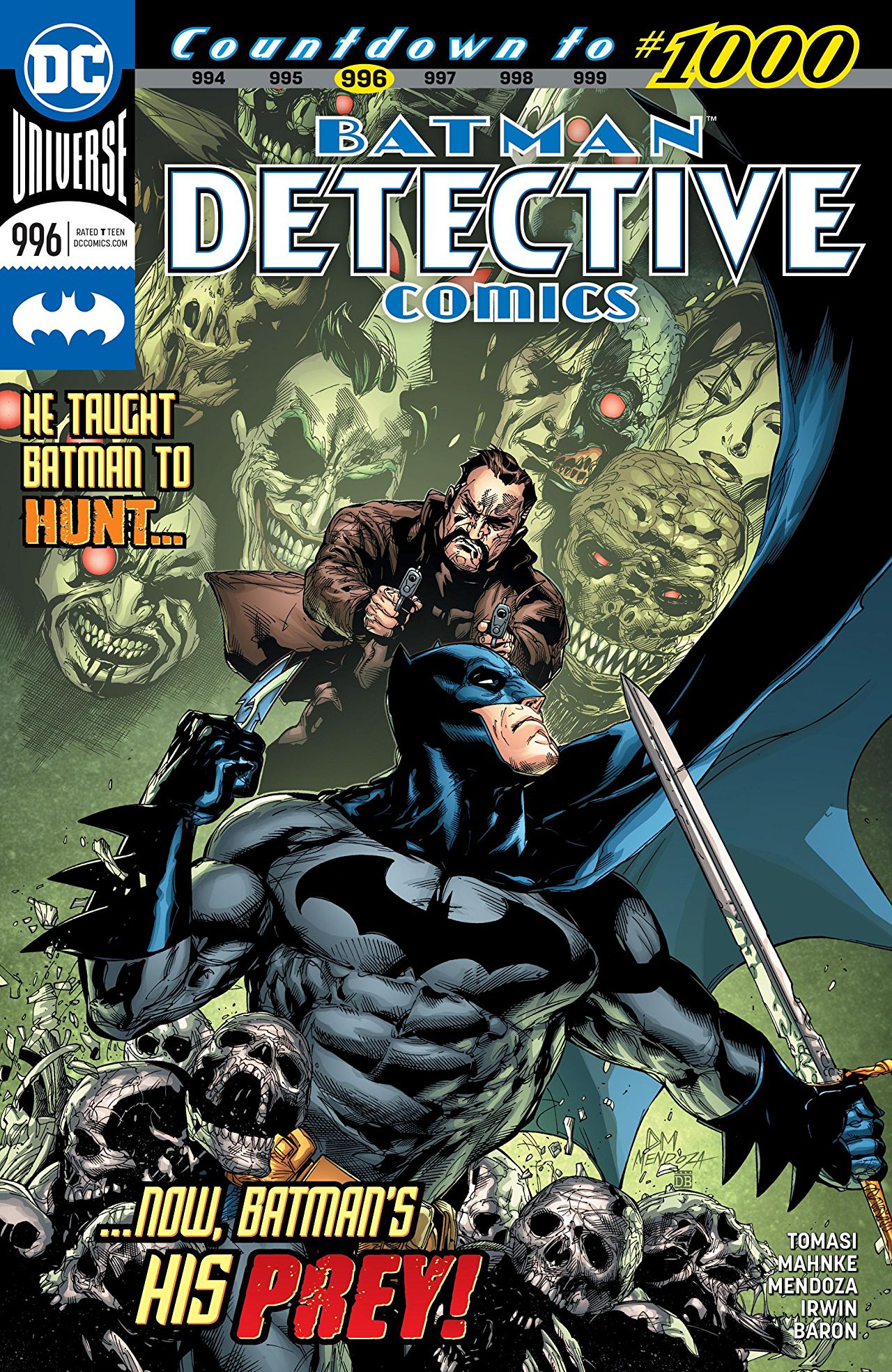 Overview: After Leslie’s death, Bruce is on a warpath for the murderer who knows him as both Bruce and Batman.

Synopsis (spoilers ahead): As Bruce leaves the Arkham, the inmates complain about what he did to them.

When Bruce returned to the Batcave, he asks Damian about Alfred. Damian states Alfred has a lot of air in the pleural cavity. He’s been thinking they should leave the chest tube in for a few more days.

Bruce mentions he did not think Damian would respond to his call. Damian makes it known he did not come there for father/son time. He came because Alfred needed him.

Damian asks Bruce about his visit to Arkham. Bruce responds someone has threatened the inmates not to talk. Damian notes these attacks have been personal, which is helpful. They are coming from someone who knows Bruce is Batman. Damian mentions his mom (Talia) and grandfather (Ra’s al Ghul) are on this list. Bruce admits they most likely did not plan this attack as they would not be indirect.

Immediately, both Bruce and Damian say, “Henri Ducard.” Damian states that Ducard must have found out what happened to his son. Bruce chimes in and states Ducard’s last known location is in Paris.

Bruce asks if Damian could take a leave from the Teen Titans for a few days and watch over Alfred as he heads to Paris. He also tells Damian that once he comes back, they need to sit down and straighten out things between them. Damian agrees.

In Paris, Bruce (using numerous disguises) asks/interrogates people for information on Ducard. He finally comes across Ducard in the catacombs beneath Paris. Ducard feels Bruce’s presence and draws his pistols. Bruce disarms Ducard, and Ducard asks how he found him. Bruce states that he (Ducard) taught him how to hunt.

As tensions cool, Ducard states Bruce’s distaste of firearms is interesting, even after all this time. Bruce tells him Gotham’s criminals know he does not need a gun to hurt or stop them. Ducard mentions how his son, Morgan, was quite aware of that fact.

Bruce gets to the point: Ducard sent Morgan to him. Morgan failed and Bruce sent him back to his father. Then just to be rude, Morgan tried to take Damian. Despite Bruce’s wishes, Damian killed Morgan. These personal attacks are retribution for Damian’s actions. Morgan recorded himself fighting Damian, to show his old man his final victory. Instead, Morgan forced his father to watch his death on a live feed.

Ducard states Morgan lost and Bruce won. Well, he won the battle, not the war. Bruce asks if this is a war. Is he attacking and murdering people he cares for to avenge his son?

Ducard tells him he is not waging a war. The nasty catacomb he lives in is not a staging ground for a strike. Bruce says it does look like Ducard is ready to make his last stand. Ducard mentions other people are after him as well. If Bruce can find him, then surely others are on their way.

At that moment, the monster from Gotham that killed Leslie attacks. This monster’s face morphs into Bruce’s greatest rogues. Ducard states that this thing is made up of protoplasm: wherever he shoots, the monster heals. The monster then starts to engulf Ducard, and he grabs a grenade. He tells Bruce that he not only got to kill the son, but also the father. The grenade explodes, and Bruce is saved.

Bruce climbs to the top of a mountain in North Korea. Once he climbs over the ledge, he sees the multiple Ninjutsu students murdered in front of their temple. There is a bat symbol made out of their blood at the entrance to the temple. The last surviving student of the Temple of Kirigi vows to punish this man who wears the symbol of the bat. Bruce states he has reached the summit of his own accord, unaided by machines or others. By this custom, he has the right to see Master Sensei Kirigi.

After a quick fight where Bruce promptly gets the upper-hand, Sensei Kirigi congratulates Bruce for almost beating to death his lone surviving student who is protecting him. Kirigi debriefs Bruce on the attack on the temple and asks Bruce to bring this monstrosity to justice. Bruce tells him he will, and he leaves.

Bruce parachutes into a desolate area of Gila, New Mexico. Immediately, a man wearing the Mister Miracle costume tells Bruce to leave now, for it is a trap. Bruce tells Thaddeus to grab his hand for the ground is flipping over. Bruce tries to get Thaddeus and himself off of the unsettled ground, but they fall into the trap.

Analysis: After an emotional issue where Leslie dies and Alfred is stabbed, we immediately follow Bruce as he travels the world. Maybe it is Bruce being stoic, or maybe it is Tomasi moving too quickly to not have Bruce deal with what happened. He comes back from Arkham and visits Alfred for two minutes before he leaves for Paris. If your father needed to have open heart surgery, ten bucks says you would visit him for more than two minutes. Tom King made the same mistake when Dick was shot in the head. You never saw Bruce at his bedside.

Tomasi’s plot moved too quickly. Act one is Bruce leaving Arkham with the inmates complaining about their beatings. I would have loved to see more from this scene. Because it reads like Bruce just needed to unwind on criminals under the guise of “looking for information.” Just a page or two focused on what happened would be nice.

Also, Bruce says somebody scared the criminals to not talk. Is this Bane or somebody else? Will there be some sense of “continuity” between Batman and Detective Comics? One can hope.

Act two is Bruce’s interrogation of Ducard. Henri Ducard taught Bruce when he was training to become Batman; Ducard specifically trained him in the art of tracking others. For a guy who has been a part of the Batman mythos for years, I am kind of sad to see him die in a very melodramatic way. He dies holding a grenade saying Bruce not only killed the son but the father as well. This entire act just seemed off.

Act three has Bruce immediately go to North Korea to meet with Sensei Kirigi. Bruce’s connection with Kirigi is Kirigi taught him Ninjutsu. I felt these scenes were just pointless. He basically climbs up a mountain to have a cup of tea and gains no new information.

The final act has Bruce head to New Mexico to meet with a man named Thaddeus. On The Batman Universe Discord server, there have been some who were royally confused with a cover for a future Detective Comics issue. This cover had Batman in chains with a Mister Miracle mask on. This is because of Thaddeus. I am very curious about how Thaddeus relates to Bruce. From what I can gather, it seems like there has never been any contact between the two. Also, Thaddeus is dead. He died at the hands of an Intergang sniper. That is going to be a tough retcon.

This is some of the best art in Detective Comics I have seen since the Tynion run. Each panel is crisp and clear. I have to give it Mahnke: all the characters faces are extremely well-defined. They look like actual people. Seems like it would be common in the industry, but there are many comics where the artists just use a generic shape for a face. I also love the page where the monster enters the catacombs. All of the monster’s faces are drawn to perfection. I am extremely impressed.

Final Thoughts: This issue does not have Bruce address Leslie’s death and Alfred’s stabbing, which I think is a travesty. Also, the plot seems to moves too quickly, jumping from location to location with no true substance. Despite the criticisms, this issue had a lot of good moments. I did enjoy it. However, this is the weakest issue in Tomasi’s run.