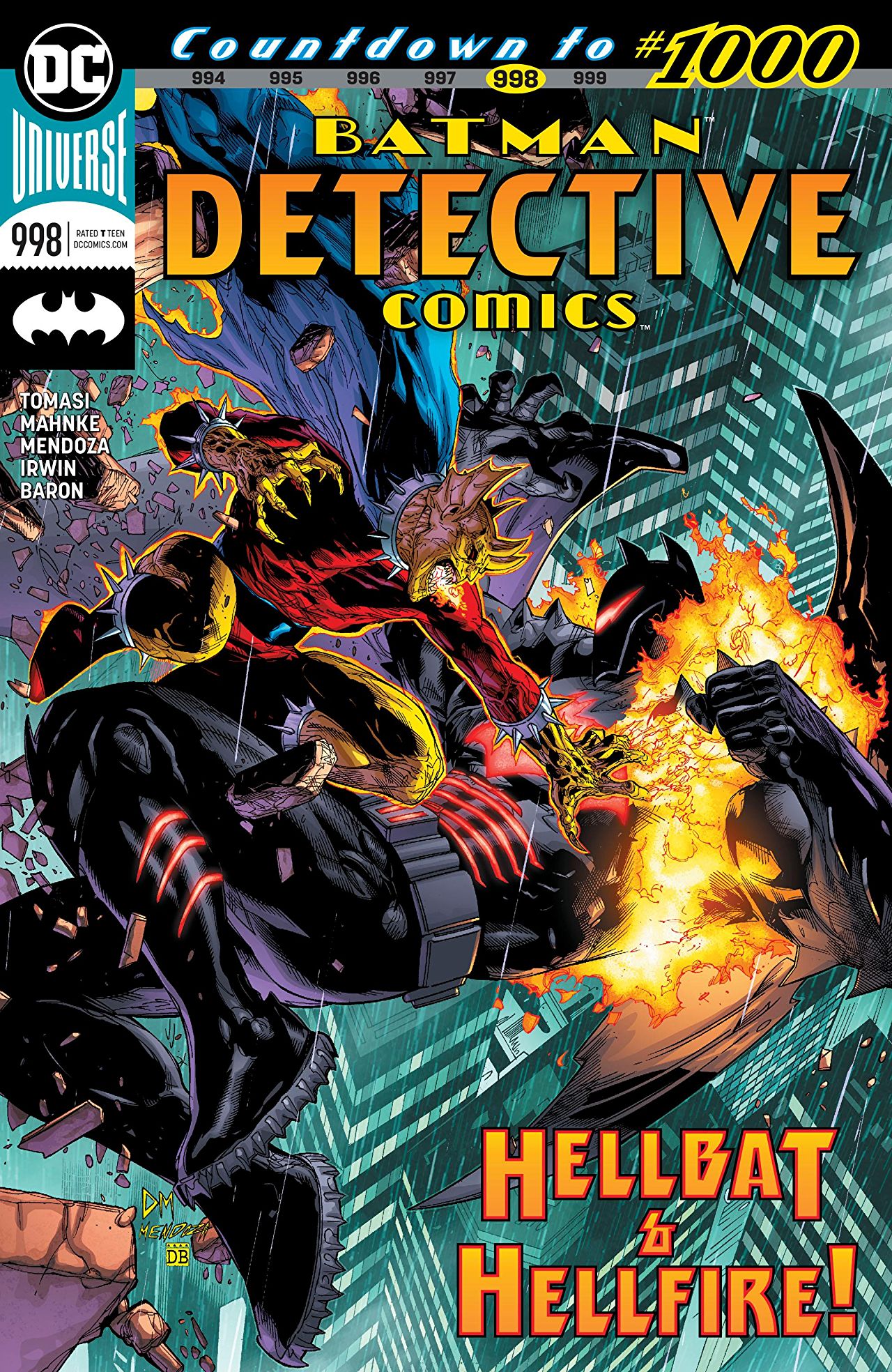 Synopsis (spoilers ahead): Looking into Hugo Strange’s eyes, Batman demands to know what he is up too. The last time Batman saw Strange was during “Night of the Monster Men.” Knowing Strange is adept at creating artificial life, it must be he who created the creature who killed Leslie Thompkins. Strange confesses he knows nothing of what Batman is accusing him of. In the middle of this interrogation, Alfred calls Batman and alerts that Jason Blood is looking for him. Batman leaves, telling Strange he is coming for him after he wraps up this monster business. Batman also tells Alfred to get the Hellabat Suit ready.

Bruce knows why Jason Blood, the human half of the demon named Etrigan, is on this monster’s list. After his training with Zatara, Bruce went to Blood to learn about fear and intimidation. Since criminals are superstitious and cowardly, he wanted to be able to instill fear in criminals.

The Batplane drops off the Hellbat Suit at his location. Batman gets this suit ready for use, recalling it’s main purpose. He knows he is just flesh and blood, so to fight large-scale threats, he created this armor. The only true limit of this suit is himself. The suit feed’s off his life force. If he stays in it too long, it might kill him.

Once he is situated in the suit, Batman goes to help Etrigan, only seeing him try to fight a green monster. This monster asks why he would place his life in danger for this demon from hell. Batman states the man bound to Etrigan is a friend of his. This monster threatens Batman by saying he will drag his soul to hell if he stands in its way. Batman lunges at the monster and tells him he is not afraid of hell.

Etrigan is ensnared by this monster’s tentacles, and Batman plans to blast the monster to set him free. Before that happens, this monster punches Batman and grabs onto him hoping to breach Batman’s armor. This monster tells Batman they are both brothers. They both spread fear, but just in their distinct ways. As his suit is breached, Batman uses the Devastator Protocol to channel the last amount of power into his fist to punch this monster into oblivion.

Etrigan is freed of this thing, and he turns back into his mortal self. Batman tells Blood that although he cannot explain it, it felt like the monster was a part of himself. Blood confirms this creature is the physical manifestation of the fear he has created over the years. Blood mentions intimidation causes him to lose a tiny part of himself. Batman admits he has never thought of it that way, but it is a necessary evil. Batman looks down and finds one of his prototype grappling guns. He tells Blood he needs to be somewhere immediately. Blood uses a magical relic to teleport him away.

Batman greets Dr. Silas Stone and tells him he is in danger. Dr. Stone asks Batman if he needs saving, and Batman admits not at this current moment. Stone follows up and asks what is Batman saving him from. Batman tells him something has been trying to kill everyone who has been a teacher/mentor to him in his life. Anyone who helped Batman become better is in its crosshairs. In his youth, Batman came to Stone to help improve his gadgets and technical mastery, with one gadget being his prototype grappling gun. In order to become the best, Batman had to combine science with his fists. Stone shoots Batman with his original grappling gun. He asks Batman what he fears. Batman tells him not being Batman scares him.

As a simulation ends, a child Bruce, sitting at the Batcomputer, tells him they always new wearing the cape and cowl requires them to wage war on themselves.

Analysis: Continuing from the previous two issues, Tomasi is jumping from one plot point to another at such a sudden pace that is jarring. So much stuff is happening, but it is immediately swept underneath the rug.

I am not sure what Hugo Strange bit was about. The Etrigan plot seemed like an excuse for Tomasi to bring back the Hellbat Suit. The whole Silas Stone bit was oddly placed. And, I really do not understand the kid at the end.

Tomasi’s story has gotten worse as he continues, and it primarily is due to how fast he is going.

I did like the explanation of the monster. It is the total collection of the fear that Batman inspires. This whole arc is about fear and what Bruce fears most. I believe if Tomasi really dives deep into this, then his Detective Comics run can be truly special.

I liked what Mahnke did with the art. I was impressed with what he drew on each page. So many things are happening throughout the issue, and Mahnke lives up to the task of drawing what Tomasi envisioned. Not going to lie, child Batman on the last page creeps me out.

Final Thoughts: I am worried about the future of Tomasi’s run, but intrigued by the concept that Batman’s greatest enemy is his own fear.