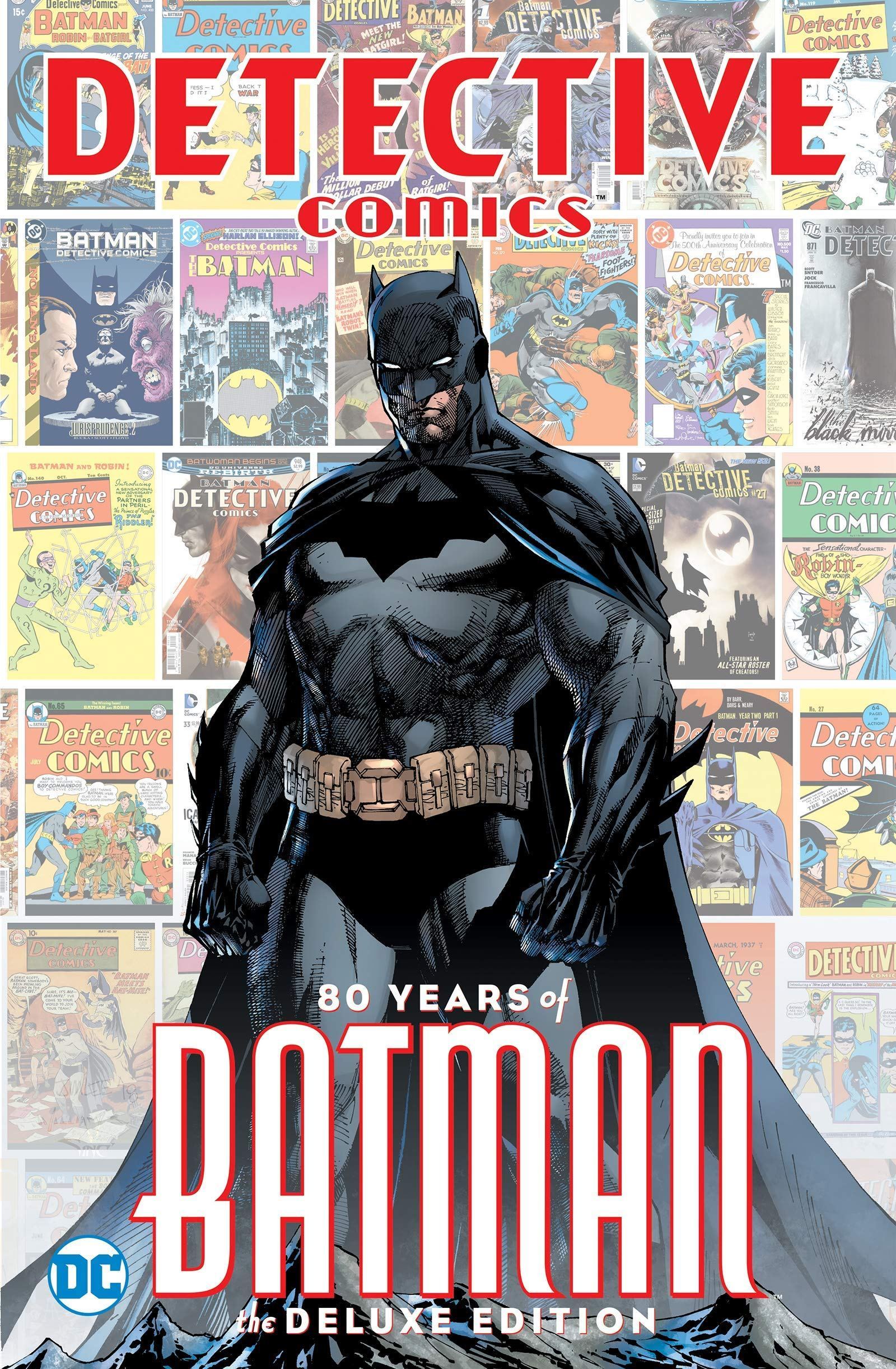 Overview: A selection of stories from the eighty years of Batman’s published history in Detective Comics is featured in this unique collection.

Editor’s Note: Due to the nature of the collection, TBU has decided to review this in a similar style to our book reviews rather than a comic or collected review.

Analysis: Later this month, Batman will celebrate eighty years of existing, and in celebration of this achievement, its no surprise that DC Comics have released this volume of reprinted material from covering the history of the character in the original title he appeared in. It’s interesting to see what DC chose to include in putting this collection together.

There is a definite focus on the beginning of the Batman Universe. It’s no surprise that the first Batman story, Bill Finger and Bob Kane’s “The Case of the Chemical Syndicate” is featured here.  Also included are early stories featuring more pulp-inspired characters such as the “Crimson Avenger” and “Slam Bradey” which are interesting time capsules to the pulp heroes from which Batman was born. (Though, I do have to wonder if putting the now fairly racist character “Pow Wow Smith” was something that really needed to show up here).

The book features the debuts of many of Batman’s core supporting characters, such as Dick Grayson’s Robin, Barbara Gordon’s Batgirl, as well as Batwoman and Bat-mite. While I’m certainly enough of a fan that I was familiar with some of this material already, it is always interesting to see how these early stories tend to influenced what followed. The Robin origin has been adapted countless times, just as Batgirl’s debut always seems to be tied to Killer Moth. Even Bat-Mite’s early appearances lovingly informed some fantastic episodes of Batman: The Brave and the Bold the better part of a century letter. The clear exception to this would be in Batwoman’s first appearance. I think we can all agree that the current day Kate Kane is leaps and bounds superior to a heroine who’s arsenal includes a perfume flask and compact-mirror who gives up her crusade as a costumed vigilante… for reasons?

The collection tries to act as something of a greatest hits album and features early stories from characters such as the Riddler and Two-Face (Originally Harvey Kent) and the Matt Hagen Clayface, and classic stories such as Dennis O’Neal and Dick Giordano’s “There Is No Hope in Crime Alley (which has a fun follow-up coming in Detective #1000) and the modern reinterpretation of Deadshot by Steve Englehart and Marshall Rogers in Detective #474.

The thing about a character like Batman is that the character has so many now, classic stories that I think that if you took two fans and asked them for a list of the ten best or most important Detective Comics issues, you’d likely get very little overlap, short of Detective #27 showing up as it does here. I think that its notable that as the book moves closer the more modern stories of the ’80s, ’90s and early 2000s, there seems to have been a conscious effort to not include the more obvious choices for this collection in favor of more obscure ones. For example, as I’ve already stated, Englehart and Roger’s Deadshot issue is included, but the next issue, featuring one of the most well-known Joker stories of all time, “The Laughing Fish” was not included. The story takes a fairly significant jump from the 70’s and 80s to more recent stories such as “Twenty-Seven” by Scott Snyder and Sean Murphy.

I did find that I missed some of the more modern stories that I grew up with.  In 1991, for instance, Detective Comics #627 reprinted the original story along with a ’60s retelling and two new stories with art by Jim Aparo and Norm Breyfogle, respectively, retelling “The Case of The Chemical Syndicate” that I can’t help but wish were featured here. We do get a similar reimagining of this story with the inclusion of Brad Meltzer and Bryan Hitch’s take on this story, which for me is not one I would have wanted here as it was just released a few years ago.

The book also includes essays throughout the book which are interesting additions to this book and range from Paul Levitz giving a history lesson on the origin of DC Comics as the publisher’s name to Neil Gaiman’s more personal essay on Batman which included some art by Mark Chiarello. Another noteworthy inclusion is pages from an unpublished story by Paul Levitz and Denys Cowan which while interesting, it isn’t really the “original story” that the book proports it to be.

Final Thoughts: While I do find myself wishing that a few of my own personal favorites had made it into this collection, by the same token, its hard to hold that against this book, as collections can’t possibly include every notable or beloved story in the character’s publication history. As it stands, this collection is a worthy celebration of Batman’s history and a worthwhile companion piece to Detective # 1000.

Editor’s Note: You can purchase your own copy of this unique collection and help TBU out in the process by heading over to Amazon.