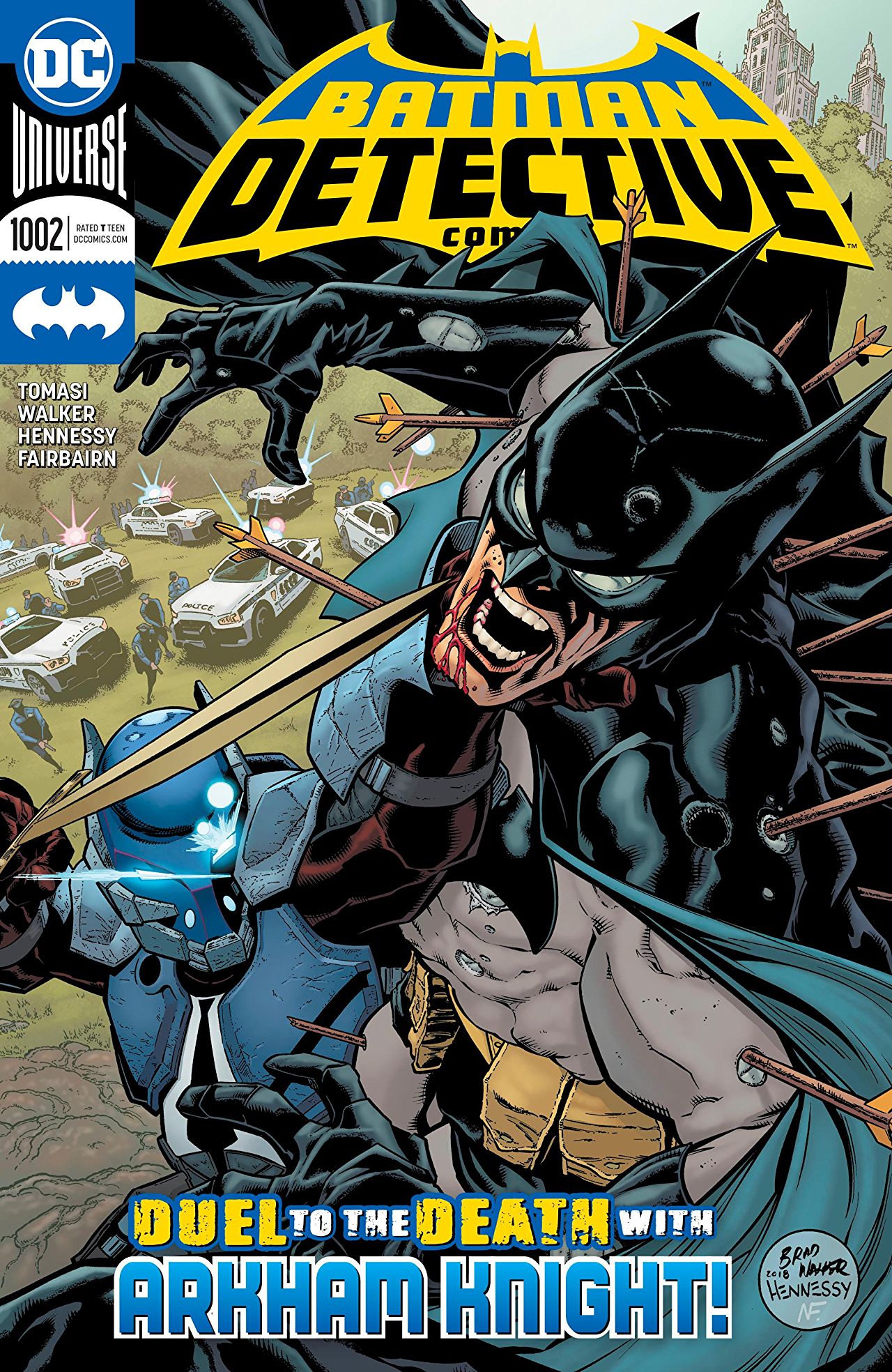 Overview: Batman stops the GCPD and the Arkham Knight’s forces from waging a war, and Robin tries to gather evidence on this Arkham Knight.

Synopsis (spoilers ahead): With a foot upon Batman’s face, the Arkham Knight declares this day was just a prologue and a hint of what is to come. Batman demands to know what he had unleashed upon his city. The Arkham Knight states he does not remember anyone giving him this city. Batman has blinded Gotham, and wrapped its eyes with darkness and pushed it into a black pit. Gotham is a kidnapped victim, and Batman is its kidnapper. Batman states the Arkham Knight is just another monster for him to put down. The Arkham Knight responds, “Who is worse: the monsters or the monster who scares the monsters?”

The GCPD arrives at the scene and shoots at the Arkham Knight. Batman tries to stop the GCPD from escalating things, but it is now too late. The Arkham Knight’s followers now engage the police. The Arkham Knight, annoyed by the police intrusion, asks Batman to make a choice: either let him and his group walk or have innocent bystanders and the GCPD suffer from their escalating skirmish. Impaled with many arrows and worried about the massive potential loss of life, Batman tells him they will meet again.

Batman summons the Batmobile, and Gordon helps him get in. Batman tells him he has to collect the evidence. Gordon lets him know he will share anything evidence his men collect. Despite Batman’s stubbornness, Gordon commands the Batmobile to take Batman home.

With Alfred patching up Bruce’s body after it was made a pin cushion by the Arkham Knight’s followers, Bruce examines the arrows they used. They knew what his suit was made of, and what was needed to cut through his suit lining. Damian, who is researching at a terminal across the room, tells Bruce he was too kind on the followers. Bruce asks him what he should have done and what the “A” on the Arkham Knight’s shield stands for. Damian tells him he knows not what the “A” means, but he does have a lock on some remnants of that day bomb which exploded.

At the floor of the Aparo Bay, Damian, with scuba gear, is analyzing the remnants of the bomb. All of a sudden, Damian gets alerts to take evasive action. He takes out multiple assailants, but he is finally subdued by the Arkham Knight.

Now a prisoner, Damian looks around and sees a tapestry of Batman and comments on how he was not expecting to go to a museum today. The Arkham Knight states that this place is not a museum: it is both a castle and a dungeon – a place of happiness and a place of suffering. This place is not a refuge for its residents, but those who live in the shadows and darkness of the Bat. The Arkham Knight states that Damian is a Robin – a songbird. These birds are creatures of the day tainted by the dark. The Arkham Knight is not only Gotham’s savior, but his as well. He leaves telling Damian to switch teams and join his crusade.

Finally alone, Damian thinks of ways to escape. He knocks over a fire lamp and uses the fire to burn through his bindings. He sees an air conditioning vent and crawls through. He climbs until he reaches an access tunnel. When he gets out of the tunnel, he is met by the Arkham Knight and his followers. He surmises Damian is hesitant to join his cause. To help persuade him, he takes off his helmet, revealing his identity to Damian.

Analysis: After my initial read, I was not a fan of this story. I believed it to be flat and boring. Thankfully, I get to write for TBU, and I had to reread the issue before this review. I think Tomasi has some interesting points.

In Scott Snyder’s New 52 Batman run, he introduced the concept of the Court of Owls. This organization lurked in the shadows for decades deciding Gotham’s fate. They were analogous to Batman; actually, I would say they were doing “Batman” before he even existed. Batman is a living legend, he is the Dark Knight, he holds Gotham in his hands, and he works in the night. The Arkham Knight’s group is the complete opposite. They work in the light. They work to expose the darkness and all the filth it hides. They believe Batman is the cause of, or at least perpetuates, this cycle of darkness. Is Gotham better off with or without Batman? Is Batman the reason Gotham cannot escape this hellish limbo of crime? The Arkham Knight believes Batman is a failure. I love his response to Batman. Batman tells him he is another monster to put down. The Arkham Knight responds, “Who is worse: the monsters or the monster who scares the monsters?” Is Batman the true villain in his war against crime?

I have mixed feelings about Walker’s art. Batman’s and the Arkham Knight’s bodies look oddly proportioned. I know Batman is supposed to be jacked, but in this issue, he looks ridiculously huge, which amplifies the weird proportions. This might because, in almost every panel, the characters take up most of that space. With all these up close shots, Walker cannot hide behind distance. From far away, it is harder to see these oddities. I would have liked the art more if he had more distance between the characters and the camera. I do not want people to think he is a bad artist, but I believe his character-camera choices put more pressure on him to draw flawlessly. The scenes with Damian look much better than scenes with just Batman.

Final Thoughts: Since the Arkham Knight revealed his identity to Damian, hopefully, we will be let in on that secret soon.