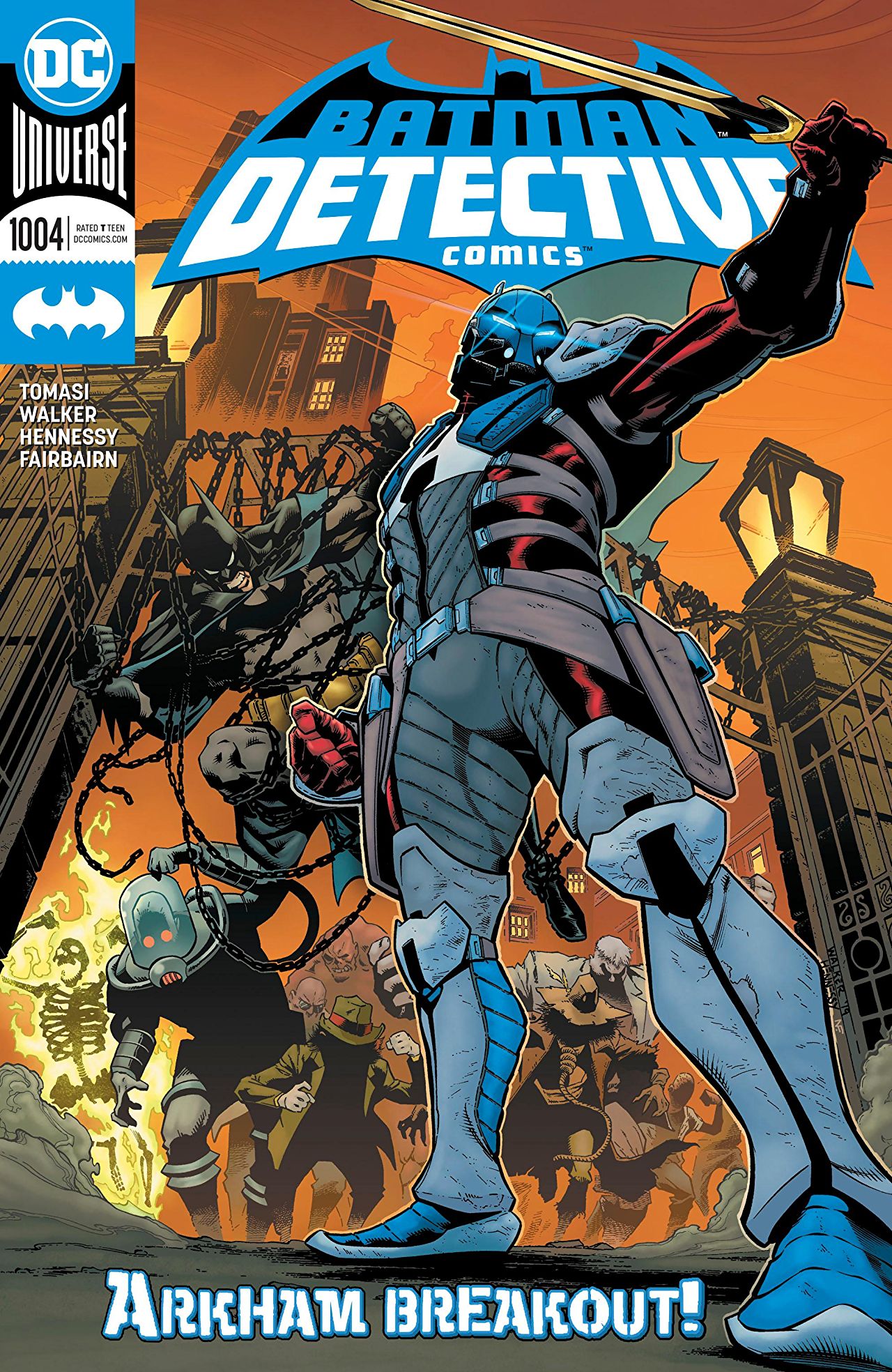 Overview: The story of Astrid Arkham, the Arkham Knight, is told.

Jeremiah tells them Ingrid Karlsson was a source of hope in his life. She was a general care physician at Arkham Asylum. Her empathy and kindness for the inmates were legendary. Whenever a patient complained of any pain, she would go above and beyond to help them. Her patients respected her for they sensed her purity of spirit. Her passion for medicine and caregiving for Arkham’s troubled reignited Jeremiah’s long-dormant ethics. They agreed on a mission to bring light to those prisoners who lived in the darkness. She pushed him to be the doctor he always hoped he would be. She also pushed him to be a better man. And, he fell in love with her.

He proposed, and she accepted.

Jeremiah could not have imagined a more perfect life. They shared their personal and professional lives together. Everything was going right until they found out they were pregnant. He realized this new life should be far away from the influence of Arkham. Even though the inmates were in recovery, Jeremiah could feel something horrible might happen. Ingrid refused. She insisted she would stand by her patients as long as she could because she would soon be away on maternity leave.

Then Jeremiah’s nightmare came to life. A riot broke out in Arkham when a new prisoner arrived, and Jeremiah became separated from his wife. While worrying about his wife and his soon-to-be child, he scanned the security cameras hectically in hopes of finding Ingrid. Instead, he spots Batman on the cameras. Out of the chaos, he heard his wife’s screams. He ran to where she was, and he heard a new scream – the scream of baby Astrid. Some of the inmates helped and protected Ingrid as she gave birth. Solomon Grundy kept Ingrid safe. Clayface used himself to provide privacy. Poison Ivy guided her through the delivery. And, Joker and Harley delivered the baby. Jeremiah would always be grateful for this unusual birthing team. For one moment, there was peace in this riot.

This peace fled as quick as it came. A Batarang flew threw the air and severed Ingrid’s major veins and arteries. Grundy filled with rage and tore off the head of the new inmate. He did this because this new inmate was throwing Batarangs that were on the ground from where Batman threw at others earlier; thus, he killed Ingrid with his careless attitude. Finally, Jeremiah’s worst day of his life ended. He kissed his wife goodbye and took Astrid in his arms.

They moved on. He raised Astrid in Arkham, protected from the rest of Gotham. She was a curious child. She found secret ways to move throughout Arkham on a whim. Sometimes these secret passages brought her to sub-cellars where stolen loot was kept. Other times, she came upon mayhem only the Batman could stop. One of the few constants in Astrid’s life was Batman; she witnessed his methods often. Astrid sensed the inmates’ fear when he entered the Asylum. She wanted to help fight that fear, and many of the inmates were happy to help.

As she got older, she found out the truth about her mother. Her mother was murdered by a Batarang. This led her to train to become the opposite of everything Batman stood for. She sought after teachers in the arts of war and sciences so she might take Gotham back from the Bat and usher in a new age of enlightenment.

Batman asks why she has not learned the new inmate was the one who murdered her mother. Jeremiah tells him it was easier to have her hate Batman. She was already surrounded by people who feared him.

Batman wonders why Astrid left so soon since this was her main base. As he observes the area, he sees a pipe. However, there is no water running through the pipe. He breaks it and pulls out a detailed map of Gotham. On the map, the highest point in Gotham is circled.

Elsewhere, Astrid tells her forces the eclipse approaches tonight, and it is time for the Knights of the Sun to take their positions against the dark. One of her minions hands her the sphere of light. And as she takes it, Batman and Robin fly down to her position.

Analysis: This issue is depressing. Astrid Arkham’s story is one of pure tragedy. She is a kid whose mother was murdered. She grew up in a madhouse. Her hate has led her to become a symbol against the Bat.

I know some are probably upset with Dr. Jeremiah Arkham because he let Batman be the villain who killed his wife instead of some random inmate. Honestly, it felt like something a father would do for their child. I am not saying he is in the right here, but as a parent, I would have probably made the same decision.

The sweetest part of the issue for me was when Astrid was born. You have Solomon Grundy, Clayface, Poison Ivy, Harley, and the Joker all protect and support Ingrid as she gives birth to Astrid. Small moments like these are a declaration that good does exist in the world. Good even exists in those who we deem criminals. It was a touching moment.

I really enjoyed the art in this issue. Specifically, I loved the pages where Brad Walker drew Astrid’s past. Dr. Arkham mentions that Astrid kept a “visual diary” of sorts, and Walker drew those scenes on a canvas.

I only have one problem with this issue – the timeline. There is no way Batman was around when she was born.

Final Thoughts: I really liked Tomasi’s origin for Astrid. For me, it was something new I have not read before. She is a villain who we can sympathize with. I am curious what Batman is going to do.