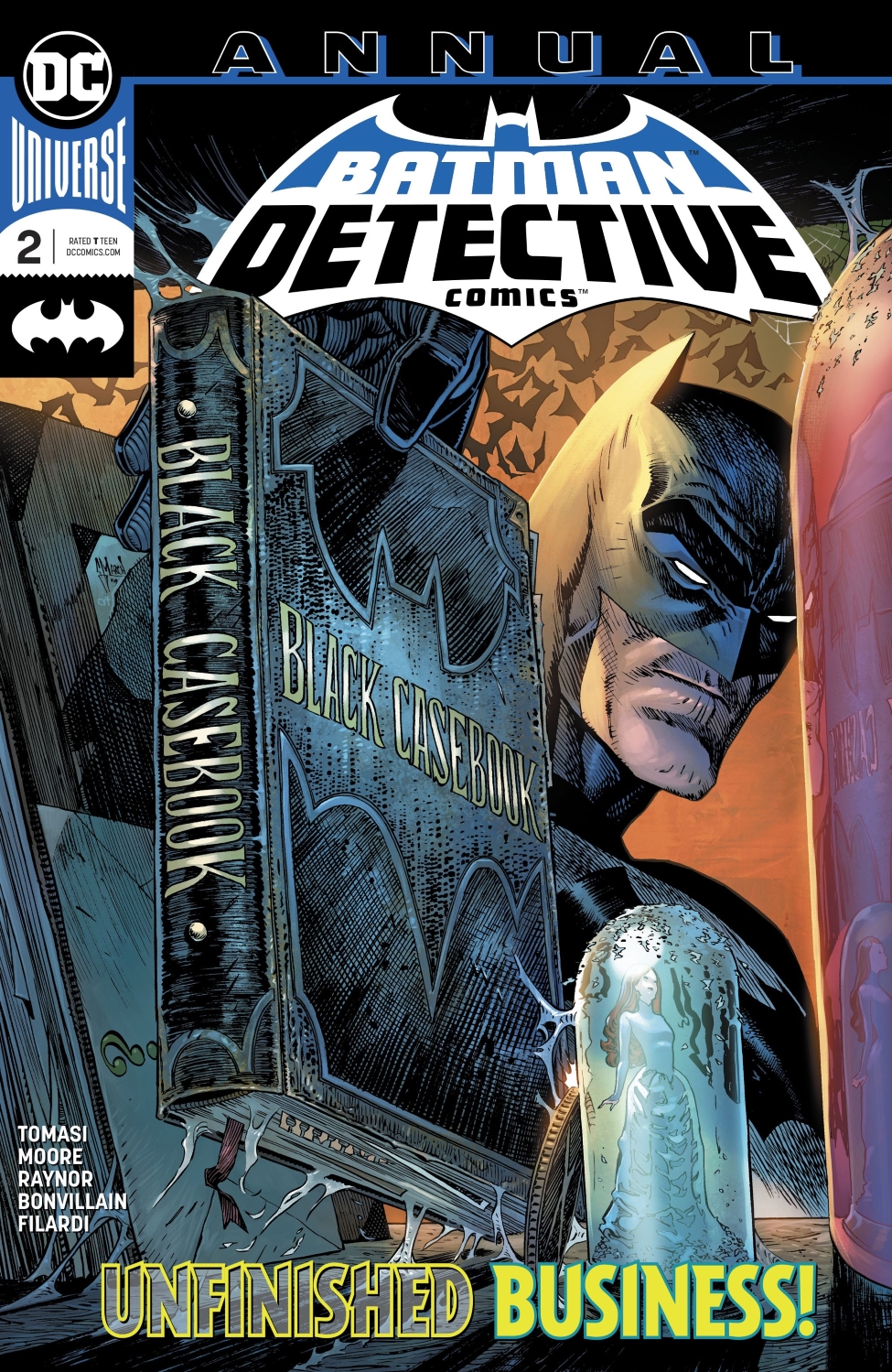 Overview: After seeing a copycat of an old villain, Bruce goes back to his Black Casebook for clues on who this mysterious new foe is.

Synopsis (spoilers ahead): On a rooftop in Paris, France, a happy couple celebrates their fifth anniversary. A mugger comes from behind and demands they give him their money and phones. Before he can use his knife, his chest is slashed twice. As the mugger’s body hits the ground, the violent vigilante known as the Reaper escapes into the night.

The criminal known as the Eraser screams what he did was an accident. He did not mean to erase his ex-wife’s boyfriend out of existence. Batman jumps from a rooftop and subdues the criminal, telling him he has to pay for what he has done. The sounds of the GCPD squad cars ring throughout the area, and Commissioner Gordon gets out observing the arrest. One of the arresting officers asks Gordon why the Commissioner has come all this way for a lowly arrest, and Gordon admits he likes to come out and scare the rookies. Gordon grabs a cigarette and heads to the nearby alley for a smoke. He tells a lurking Batman it has been a good summer so far. The city is not going from one crisis to another. Things are normal. Gordon tells him he is finally able to take a vacation and relax.

Back in the manor, Bruce calls for coffee as he exits the shower. Alfred hands him a cup and tells him his breakfast is ready. Alfred also mentions he has downloaded the morning newspapers onto his tablet. Since Batman Incorporated is no more, Bruce has had to keep his attention on international situations as well. Alfred says he could have gone to Europe and get a firsthand account of how things are if he did not cancel his European business trip. Bruce says the trip is for industrialists to pat each other on the back and ask for favors. It is not worth his time. Alfred tells him the Batman might not be interested, but Bruce Wayne needs to make an appearance.

In the middle of their conversation, Bruce curses when he reads that the Reaper has struck again. He tells Alfred he needs to grab the Black Casebook. This book is a record of all his unusual cases and failures throughout the years, stored in case he needs the information in the future. He finds the section on the Reaper, whose name is Judson Caspian. He started years before Bruce started being Batman. His father told him stories about the Reaper and how he haunted Gotham’s streets punishing the guilty. The Reaper retired for many years but returned to Gotham with his daughter. It was then Bruce discovered who the Reaper truly was. Caspian saw his wife murdered and decided to be judge, jury, and executioner. When Caspian donned his costume again, he came into contact with Batman, and instead of choosing prison, Caspian let himself fall to his death. Bruce bets this Reaper is a copycat. The most recent sightings of this new Reaper are in Greece, which is the same country Bruce has the international business conference. Bruce informs Alfred that they are going to Europe.

Bruce drives into the hotel with Sophia Zervas, heir to a banking conglomerate, who is frustrated at Bruce for bailing on her at their friends’ wedding. She thanks Bruce for inviting her because she has been wanting to participate in this event for years. Alfred helps them unload the car, and he and Bruce go to their rooms. Later that night at dinner, Bruce gets hit in the face with a small piece of paper while listening to the guest speaker. He looks for the source and sees a smiling Sophia. As the evening ends, Bruce leaves the event wishing Sophia a goodbye. He and Alfred are going to start their night jobs.

A drunk man is walking down the street and a group of thugs tries to rob him. However, this is a setup where Alfred is a playing the part of being a drunk to drag out the new Reaper for Batman to confront. After a brief tussle, the two became separated, and Bruce and Alfred regrouped at the auxiliary Batcave in Crete. Bruce took the Reaper’s mask and analyzed it and sees the mask is sending data back to its source. He determines where the Reaper is and heads for a round two.

After finding a hidden entrance in a bookstore, he encounters a waiting Reaper. Batman disarms and unmasks him, only to realize this person is a decoy. Julian Caspian, Judson’s son, walks into the room and says he is resurrecting the Reapers. Julian tells Batman he has created a global network of Reapers to be tools of vengeance. As a special surprise, Julian created the elite Reaper Prime for Batman. Batman defeats Reaper Prime and swears to dismantle Julian’s network. However, Reaper Prime had a fail-safe and is going to detonate himself with the goal of killing Batman. Batman is able to escape the explosion, carrying the Reaper he beat to be given to the police.

Analysis: I was very underwhelmed by this issue. I liked the story until Batman went into the underground lair. After that, things were very predictable and not interesting. I think this story will be liked by many people, but I was not one of them.

I enjoyed the moments Bruce and Alfred shared. Tomasi writes them as father and son with plenty of sarcastic banter between the two. I also liked Sophia. I have no clue who she is, but her interactions with Bruce were nice. It seemed she really had an effect on Bruce, and that was cool to see. I appreciated all the ties to Batman Incorporated. So, we can presume that Batman Inc. is in continuity again.

The reveal of Julian was lame in my opinion. I honestly thought this new Reaper was Judson’s daughter, or that she was the one behind creating the Reaper. It would make sense why she has a vendetta against Batman because in her view Batman is the true villain. That plot makes sense to me, but a random son no one knows about creating a global network of soldiers, that does not sit well with me. Now, you could say this Reaper network is a twisted, mirror version of Batman Incorporated, and that relationship is pretty evident. However, I believe Tomasi did not execute that part well.

The art is the highlight of this issue. Tomasi wrote in a bunch of fight sequences, and the art team, led by Travis Moore and Max Raynor, did not disappoint. Bruce goes to multiple locations in this issue, and the art team put in the time to distinguish each location as being uniquely different from the others. I appreciated how they respected the architecture of buildings in Crete. I think that level of attention to detail is important in storytelling.

Final Thoughts: I found this annual to be extremely disappointing. The last issue of Detective Comics was so incredibly good I wanted Tomasi to use this extended issue and continue the Arkham Knight plot. I felt he could have chosen a more interesting plot for this story. But, the next issue of Detective Comics will go back to the Arkham Knight plot and I cannot wait!