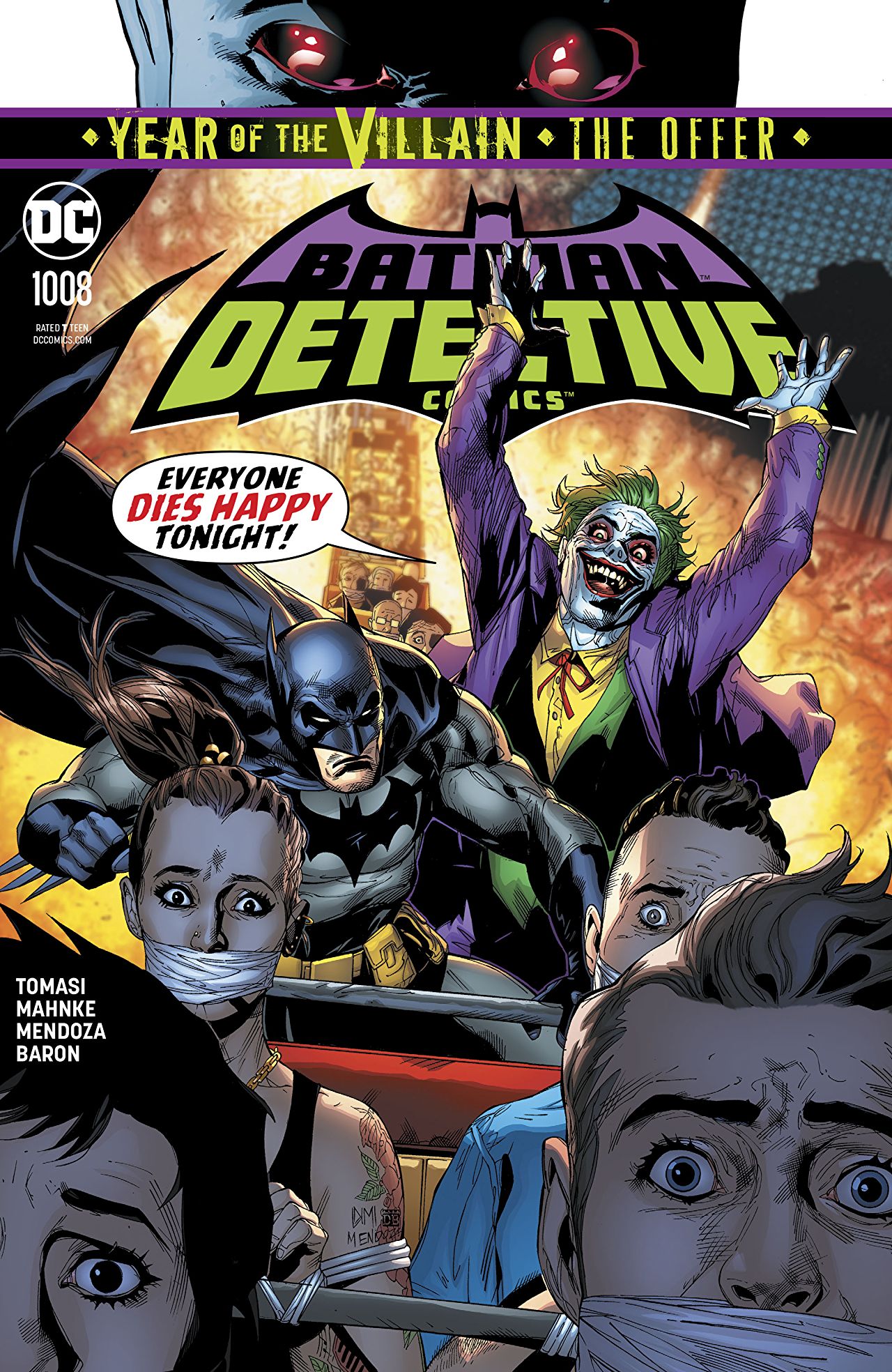 Overview: Batman and the Joker have a date night at the amusement park.

Synopsis (spoilers ahead): Just as the sun sets in Gotham, Alfred wakes up Bruce. Just as he opens his eyes, Alfred hands Bruce a tablet with Joker’s “Invitation” on the screen. The Joker has invited Batman to come down to the amusement park. It looks like Bruce’s night has been spoken for.

With a soft drink and cotton candy in either hand, the Joker greats the people at the amusement park. He is so happy to have moved on from Lex Luthor and the Legion of Doom. He watches a fire-breather and comments on how that is always a classic. He is impressed with the knife swallower and sympathetic to the Man-Beast in his cage. He is elated with the Human Cannonball when he is shot from his cannon.

From the corner of his eye, the Joker can see a concession stand worker displeased. The Joker asks if he can buy his hot dog stand, but the man refuses since it has been in his family for seventy years. He would never sell it to a man like the Joker anyway. He questions if these Joker necklaces are even dangerous. The Joker activates the necklace, and the worker inhales a lethal amount of the Joker toxin.

It is revealed all the people in the amusement park have these necklaces.

Batman throws a batarang into the Joker’s arm. The Joker is ecstatic his friend would be able to drop by. He states that he is aware that Batman has done his due diligence and figured out coming at Joker directly would harm all those in the amusement park. Batman demands that the necklaces be deactivated, and the Joker declines. In anger, Batman punches Joker in the face, and the Joker walks it off. In fact, it is time for Batman to join the fun.

Batman follows the Joker while he goes on about how the park has been totally renovated since the last time they were here. Joker stops by a young boy and commands him to smile and laugh while he is still a kid. Things only grow darker as one gets older. The boy asks Batman if everything is going to be okay. Batman gets on his knee and promises all will be okay. Joker joins the conversation and asks if he looks like a bad guy. With a great amount of courage, the boy declares Joker is just a bully. The Joker does not necessarily disagree with him. He gives the boy a cookie just as he is about to leave, but Batman throws the cookie away.

It is time for Joker’s grand plan: enjoy the amusement park with Batman. Joker asks if Batman wants to ring the bell with the hammer. They can determine who is the real Flex Mentallo. They take a ride on a Ferris wheel, drive go-karts, and go through the “Tunnel of Love.” With Batman being so Batman, the Joker demands Batman to get more into the spirit.

The last item on tonight’s agenda is Zorak, the Fortune Teller. The Joker pulls the lever and gets his fortune. The card says, “The sky’s the limit.” He tells Batman it is his turn. Batman says he does not need a piece of paper to tell him his future. He punches the Joker and the display case. Joker hid the main detonation device for all the necklaces in the case. Batman disarms the necklaces and Joker’s contingency bomb. The Joker tries to escape through the air with balloons, but a host of bats attack the Joker, bursting the balloons, and dropping the Joker in the bay.

Elsewhere, one of Lex Luthor’s drones flies into the secret lab of Victor Fries. He offers Fries the chance to save his wife.

Analysis: This one-shot between these two arcs is extremely good. To be clear, it was incredibly weird to read, but it is one of the best single issue stories I have read in a long time. This Joker reminds me of the Joker from Batman: The Animated Series. As I was reading this, I read all of Joker’s lines with Mark Hamill’s voice. Frankly, I could see an episode feature this story.

I laughed so hard when Batman was forced to go on those rides with the Joker. From Tom King’s Batman, we already know Bruce does not like amusement parks/carnivals. He was with his best friend and fiance and still had an awful time. Going through the park with Joker only solidified his displeasure with amusement parks.

I really enjoy Doug Mahnke’s art in this issue. The entire creative team did a great job bringing this issue to life. It was bright and lively like any amusement park, but you can see the horror in each of the bystanders.

Due to the “Year of the Villain”, Lex Luthor is giving away his vast fortune to help spread doom. As a part of this, he has visited many different villains and has offered them his help. We see Luthor offering to help save Nora Fries. This is a big deal because Victor has tried to save Nora multiple times. In fact, his current condition is because of one of his failed attempts.

Final Thoughts: This is a hilarious issue and one of Tomasi’s best so far.