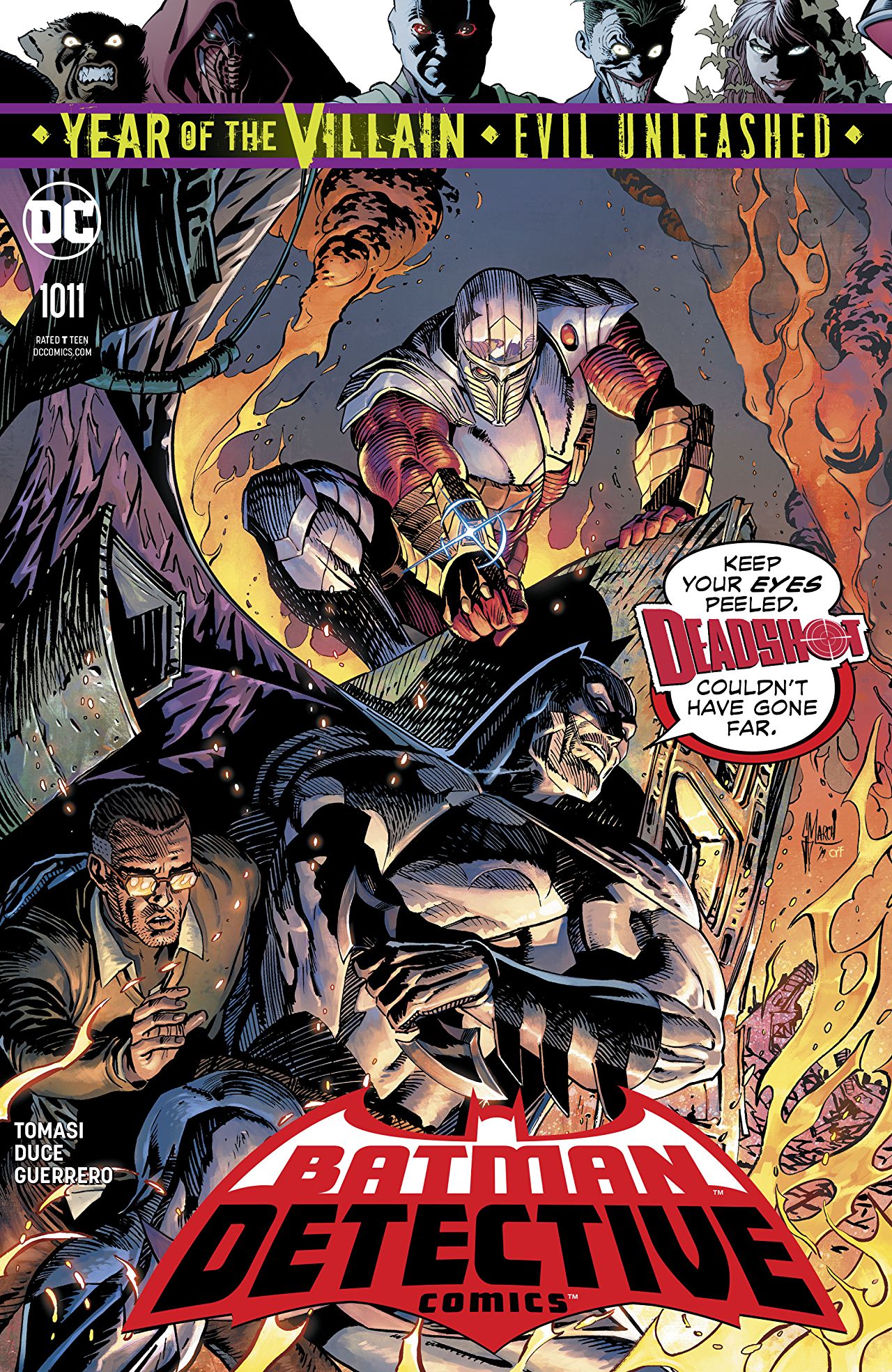 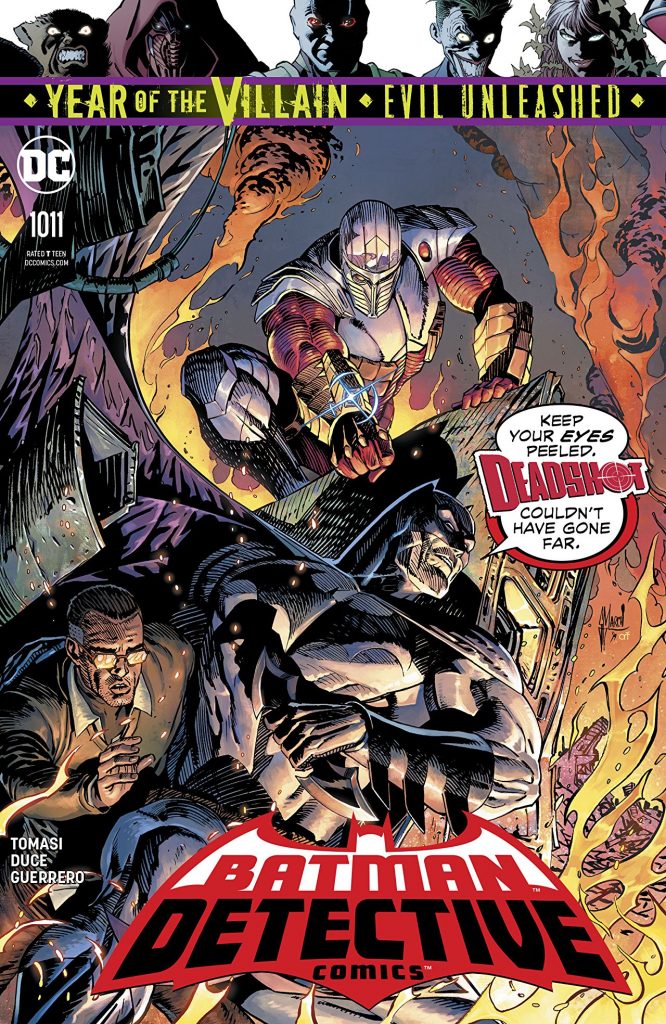 Overview: Our castaway adventure concludes, and it’s time for the showdown you’ve been waiting for…Bruce versus Deadshot!

Synopsis (spoilers ahead):  We begin an hour and a half in the past, with a strained Bruce heaving the hull of Hiroshi’s plane from it’s resting spot. Bruce states that he’ll gladly answer any questions the two men have, but first he needs their help for one final mission. As they begin to hatch their plan Bruce submerges himself in a pool of mud, citing that villains are a cowardly lot, and that fear is of great asset to him. Clarence muses that some things never change.

We then fast forward to current events, where Deadshot is lining up a kill shot for the running Bruce. However, Deadshot didn’t anticipate that this masked crusader may have help. Using the remains of Hiroshi’s plane as a wrecking ball, Clarence and Hiroshi strike – Clarence inside the plane while Hiroshi uses a rope harness to launch the assault. They are successful, smashing into Deadshot and knocking him off his feet while Bruce tends to the CEOs. After ensuring they’re okay, Bruce rushes back to check on Clarence and Hiroshi. He discovers that Hiroshi’s been dealt a deep blow, but not before getting Deadshot first. Bruce wants to tend to his wounds, but Hiroshi urges Bruce to continue the fight.

Next we cut to a fleeing Deadshot, frustrated with the proceedings so far. Without even a noise, he calls out for the masked crusader, knowing he is nearby. Bruce appears and they begin to quarrel, each appearing on even ground. Deadshot decides to use a vine to strangle Bruce, using a nearby tree for leverage. Bruce snaps the vine and delivers a decisive uppercut, ending the battle.

We see the next morning, and how Alfred was able to follow Bruce’s transponder and come to their aid. Next, we see Bruce say his farewells to the boys he’d met, ensuring that Hiroshi is healing well. He leaves them a comm-link for further communication. This is followed up on a few days later, where Batman flies in using his Bat-Plane to drop off a care package for the boys. Inside they find a vast variety of books and foods. They laugh to themselves, very pleased with the delivery.

Finally, we return to the Gotham Pines Barrens where Mr. Freeze is giving out a dossier on Nora Fries to a group of rugged men. We learn that they are to tranquilize specific targets that will be each be used for their specific characteristics.

Analysis: Our arc concludes, and with it, I found myself enjoying this issue far more than the last. While, in essence, this issue was a massive fight scene, Tomasi pens a satisfying conclusion that delivers with some standout scenes. I particularly enjoyed seeing that Bruce included Hiroshi and Clarence in his plan, ensuring them one final foray into the action they had long been removed from. While it could be seen as slightly reckless to ask two old men to help fight a crazed killer, I think this is perfectly in character, as Bruce needed their aid to ensure everyone was saved. In the end, Batman will always take the necessary risks for public safety, and he did so here.

The scene at the end when Bruce delivers the care package was my favorite moment in the issue. These are the intimate moments where Tomasi demonstrates his understanding of the character. Bruce is so much more than just a man who dresses up as a Bat and fights crime. He is a compassionate, thoughtful, and loyal man who will never forget about his friends or family. I think this scene highlighted those traits, and it brought a smile to my face.

Duce’s linework is smooth and easy to understand. While this may sound superfluous, I think it’s very important when the large majority of the issue is a choreographed fight, and Duce nails the progressing. Each panel moves seamlessly into the next and provides a sense of forwarding motion and momentum until the last blow.

And, speaking of that last blow – Guerrero does a wonderful job on the colors here. His colors throughout are consistent, but this page blew me away. The lighting used on the moon to offset the knockout blow and the blood splatter was gorgeous. Very well done!