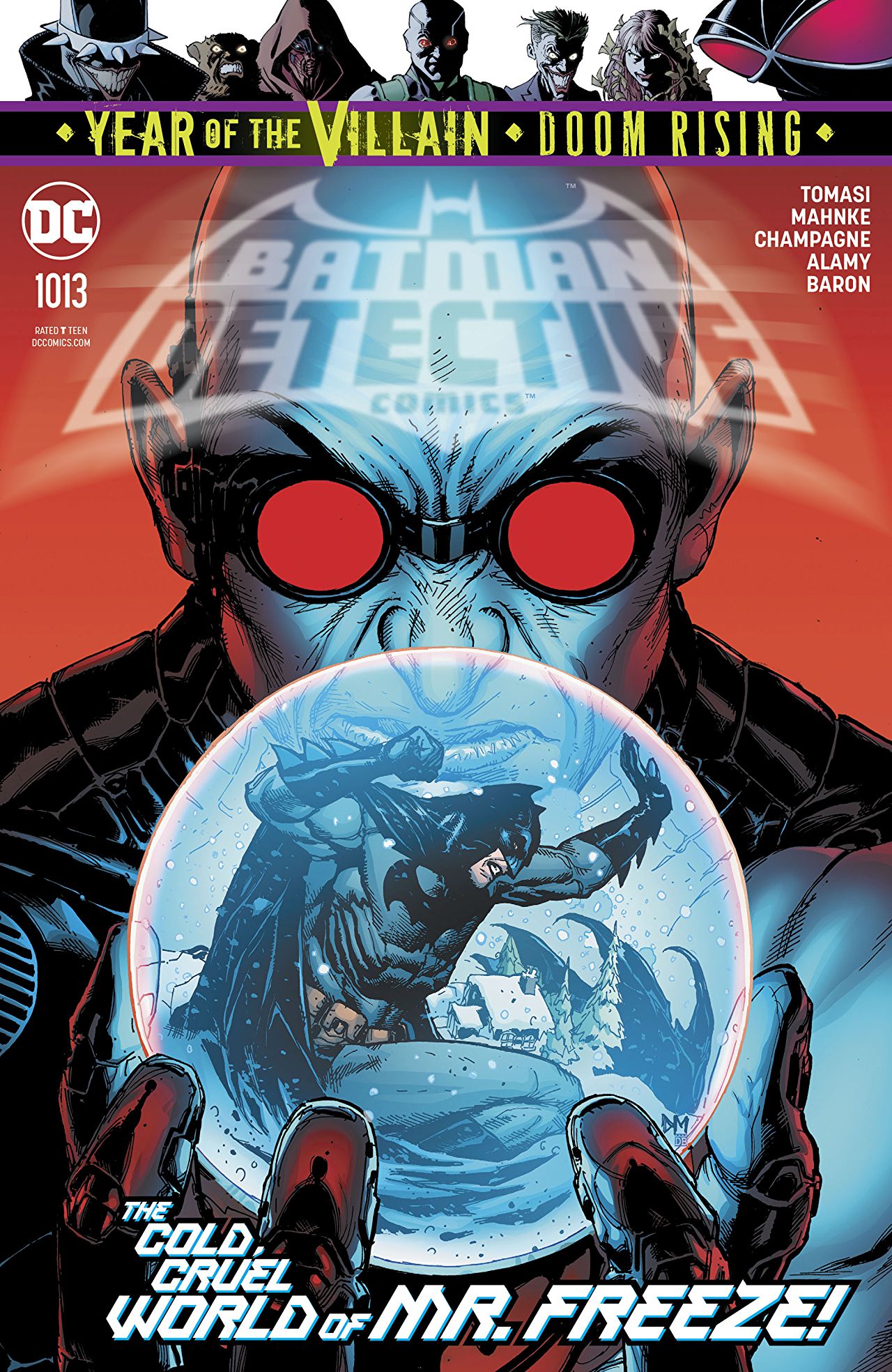 Overview: Mr. Freeze is one step closer to accomplishing his ultimate goal, but will Batman thwart him beforehand?

Synopsis (spoilers ahead): We begin with a brutal interrogation. Batman questions a bloodied criminal, asking who sent them to kidnap the women from the prior issue. As the camera pans out, we see that this is far from the first to be questioned- there is another beaten criminal lying in the alley. The criminal in Batman’s arms mentions that he’s been beaten beyond recognition. Batman brings the criminal to the roof, stating it wasn’t the beating that killed the man, it was the fall. As Batman threatens to drop the criminal, he gives the name “Freeze”. Batman has gotten what he needs as the beaten criminal stands – Alfred in disguise the entire time. They blast off to the Batcave to prepare for Freeze.

Elsewhere, at Gotham Pine Barrens, Freeze speaks to his cryogenic love as he disposes of bodies that have met their end. He is prepared to move forward with his plans at any cost. Interrupting, Batman blazes through the wall adorned in a new suit of armor equipped with a flamethrower. Freeze flicks his finger, and with the flick, it is revealed that the bodies have become unwitting pawns – zombies that Freeze uses against Batman. Freeze escapes as Batman is left to fight the horde, stating that he has all the data he needs to initiate his plan.

Using his deductive skills, Batman discovers that a shared control panel must be what’s used to manipulate the bodies. Taking it out, they become unresponsive, and Batman sets off after Freeze. Batman uses a “Batskimobile” to give chase, catching up to Freeze. He leaps onto the vehicle, but Freeze has prepared a contingency. He flips a switch that electrocutes Batman, sending Batman careening off the vehicle. Falling into the frigid water, Batman quickly accumulates ice around his new suit. As Freeze thinks he’s disposed of Batman, we see that Batman can ignite his suit, thawing himself. Now free, he asks Alfred for a larger vehicle.

Back in the Batcave, Batman and Alfred are shown using technology to help defrost Freeze’s victims. In a parallel scene, we see Freeze finally getting that which he desires: thawing Nora. As she comes to consciousness she screams, “Victor don’t!”

Analysis: Tomasi, Mahnke and company craft another compelling issue. We have seen many Mr. Freeze stories revolving around awakening Nora, but he always falls short. This issues cliffhanger provides amble room for interesting character interactions while keeping the intrigue throughout. Standout moments for me include Alfred’s acting abilities used once more, Batman’s new dynamic suit (loved the contrast of that design!), and the use of Batman’s deductive abilities. It’s always a welcome addition when we get to see Batman act as a detective in Detective Comics. This is the Tomasi I enjoy – sprinkling solid character moments with intense action (lots of fisticuffs in this one).

Similarly, this is what I’d expect from Mahnke. Please don’t believe that to be condescending or as criticism – I hold Mahnke to a high standard that he consistently hits. From the engaging action sequences to the design of the new suit (can you tell I liked it?), I thoroughly enjoyed the art. We don’t get many looks at our characters out of costume this issue, but after the last arc, I’m glad for the decidedly superhero slant.

Final Thoughts: Tomasi and Mahnke continue our Mr. Freeze story, and with it, they continue to defrost my trepidation. Indeed, this is another solid entry that is worth checking out.