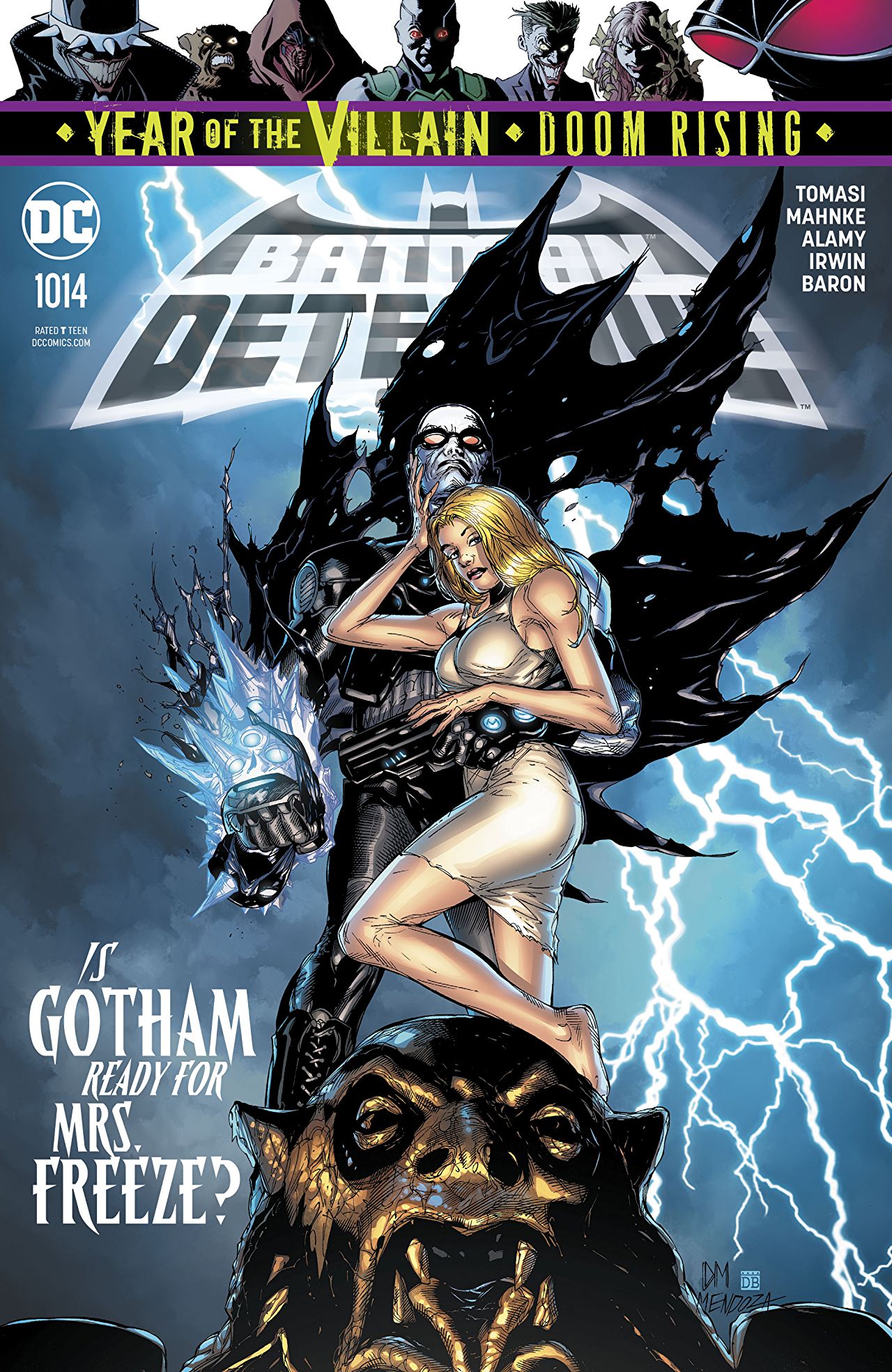 Overview: Nora Fries lives again, afflicted with the same sub-zero condition as her husband. Will she join him and become his partner in crime, or will Nora forge a new path?

Synopsis (spoilers ahead): This issue opens with a newly awakened Nora Fries arguing with her husband, Victor Fries. She feels betrayed, telling Victor that she never wanted to be frozen. Nora wished to battle her cancer on her own terms. Yet, Victor made the decision to incarcerate her in ice against her will.

“You wanted to do battle against a foe that couldn’t be defeated,” Victor says. “You were braver than I was, darling. I was not prepared to lose the love of my life… while you were prepared to risk it all.”

An alarm for a temperature drop to absolute zero blares in the background as they continue to argue. Nora, her body encased in a containment suit, struggles to free herself. Victor tries to calm her. It’s for her own safety, he tells her. Nora doesn’t care, and she rips the containment suit helmet off as the countdown reaches one second left.

Her skin is ice cold. When she touches Victor, she notes how cold he is, too. Mr. Freeze tells Nora that he once had to wear a suit like hers, but now he is able to come and go as he pleases in whatever temperature exists inside or out.

They kiss. Then Nora pushes Victor away, telling him that everything is moving too fast. She needs time to process everything she’s been through. Victor then recounts the steps he has made while she has been frozen, noting that his life has been a living hell for so long without her.

Meanwhile, Bruce Wayne is at WayneTech pulling twenty-four-hour shifts with Lucius Fox to figure out what Freeze has done to his test subjects. An alarm blares for a breach in the cryonic lab as Mr. and Mrs. Freeze break-in, searching for a special compound Victor made and tucked away when he was employed here.

Bruce and Nora recognize each other, and Nora notes how much of a gentleman she remembered Bruce as being. She recounts how he was such a big supporter of the ballet, her passion in a past life. Victor hijacks the conversation, recounting how Mr. Wayne halted his cryogenic research.  The husband-and-wife team recovers the compound they came for and leave.

Later, Nora Fries performs ballet on a stage before her husband. Now, her once pale skin is blue like his. She no longer needs the containment suit. After her dance, the two don matching outfits and goggles and unveil themselves to Gotham as the new Mr. and Mrs. Freeze. The symbol of doom canvases the night sky as the two makes their grand debut unto an unsuspecting city.

Analysis: This issue is enjoyable and sincere in a way we haven’t really seen in this Tomasi/Mahnke run thus far. Dough Mahnke’s art is absolutely gorgeous, and for an issue so reliant on dialogue, Mahnke really knows when to pull in and let the eyes and the soul of our characters capture our attention and carry us through this issue. His paneling perfectly crystallizes the more tender moments between Nora and Victor Fries, and in some moments, it’s almost like reading a dark, twisted Tim Burton-esque fairytale.

Nora Fries, in particular, is both beautiful and haunted. Mahnke captures the innocence and sadness projected onto her by her husband and balances it deftly with moments of her own personal strength. This makes her an enigma, the wildcard of the narrative that could make or break this arc, as we don’t know what her intentions are. We see her love for Victor, but the way she both shows affection and recoils makes her the most interesting focus of this issue.

Victor, while one note, still resonates in that way that makes Mr. Freeze such a tragic and beloved villain. Mahnke does a great job conveying Victor’s passion and love through body posture and gesture, and it syncs up perfectly with Peter Tomasi’s beautiful dialogue.

The high point of this issue lies in the conversations between Nora and Victor Fries. Many fans have long wanted to see Victor and his wife reunited, and it’s very well done. Where Tomasi stumbles in plotting (that whole “secret genetic compound” at WayneTech was over as quickly as it was introduced), his tender moments between the couple are heartfelt and passionate. Tomasi clearly loves these characters, and readers feel it.

My one hope for this arc is that this new dynamic between Victor and Nora sticks. It’s nice to see momentum and change with one of Batman’s most beloved villains, especially since Mr. Freeze oftentimes comes across as a one-trick pony forever mourning his cryogenically frozen wife. Having his wife by his side as a partner in crime opens up the door for all kinds of possibilities that, on the one hand, make Mr. Freeze interesting again, and on the other hand, give this Detective Comics run meaning and weight. Thus far, this run has been treading water. Making Nora Fries a more permanent thorn in Batman’s side is just enough to disrupt the status quo and make Detective Comics relevant again.

Final Thoughts: The new dynamic of Mr. and Mrs. Freeze as a supervillain power couple is the status quo shift Detective Comics needs in order to regain importance. Let’s hope the beauty of their reunion in this issue leads to greater stories between the two.