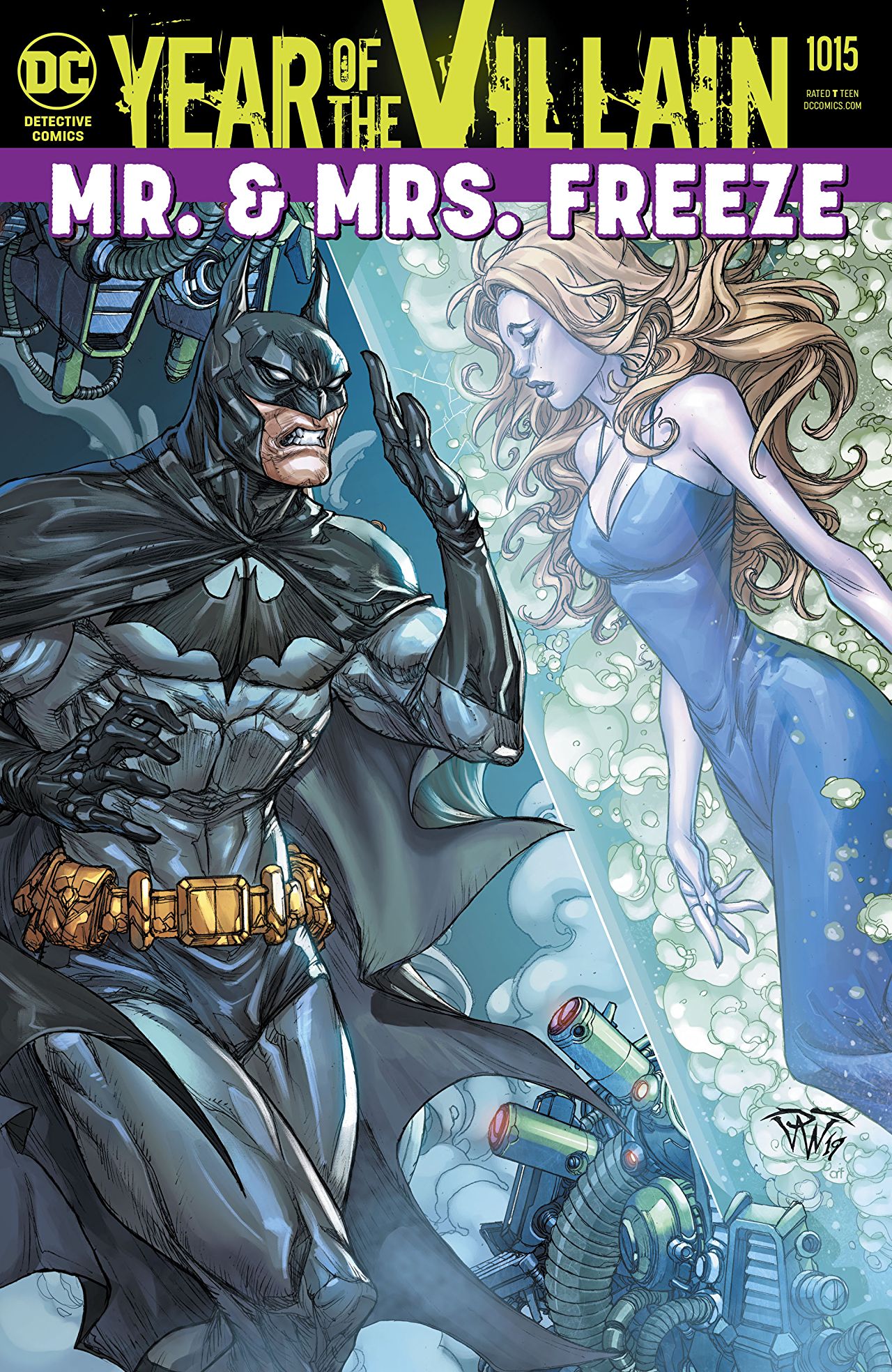 Overview: Nora Fries’ betrayal forces a scorned Mr. Freeze to seek out an alliance with Batman.

Synopsis (spoilers ahead): At Wayne Manor, Bruce Wayne, Alfred Pennyworth, and Lucius Fox frantically work on a cure for reviving the victims of Mr. Freeze.

Meanwhile, Victor Fries trains the newly revived Nora on how to use a freeze gun with the promise that, with just a few major heists, the two can secure enough money and retire. During their heists, Victor notices cruelty in Nora he never knew she had in her. Worst of all, she seems to be enjoying their crime spree.

Days later, Lucius finally discovers a serum that may undo the damage Mr. Freeze has wrought on his victims. Before he can use it, he must test it, and Bruce volunteers. Alfred reluctantly freezes Bruce’s arm, and Lucius injects the serum. The serum works… sort of. Bruce’s arm thaws, but his nerves are dead, rendering it useless.

At the Gotham Pine Barrens, Victor tells Nora that they’re ready for an adventure up to Alaska. They have enough money, and they can now start life anew. Nora pushes Victor away. Again, he is dictating her every action, telling her what she must do and puppeteering her next steps. Nora is disgusted with it and tells Victor she’s leaving. When Victor threatens to follow her to the ends of the earth, she freezes him.

Finding no more answers in the Batcave regarding the serum, a one-armed Bruce suits up and hits the streets. He finds Mr. Freeze waiting for him on the Gotham City Police Department rooftop. Victor tells Batman about the gift he was given from Lex Luthor and how he used it to resurrect Nora. He tells her how she’s changed and how he needs Batman’s help in finding her.

Batman agrees to help Victor once Victor fixes Batman’s arm and perfects the serum to save those victims Lucius, Bruce, and Alfred have been working tirelessly to cure.

At the Mount Hope Cemetery, Nora Fries builds a mausoleum of ice above her dead parents’ graves. She bows and tells them that she has big plans for the future.

Analysis: Where Detective Comics #1014 gave readers so much hope for a new dynamic for Mr. Freeze, this issue unravels those prospects. In spite of the story heading in this direction, there is no Mr. and Mrs. Freeze. Not really. Readers are given a single two-page spread of the criminal couple pulling heists before writer Peter J. Tomasi and artists Doug Mahnke and Jose Luiz briskly lead us to this arc’s conclusion. It feels greatly truncated as if there was a bigger story that was squashed because changes are potentially on the way. It’s a shame, too.

In the last issue, I was enamored with this idea of a supervillain power couple terrorizing Gotham. The idea of a blossoming romance between these fated lovers as they crown themselves the new king and queen of the criminal underworld sounded like a beautiful idea that would shake up Mr. Freeze’s status as a one-note foe. Even if it was a temporary change, it would have been wonderful to see some sort of drawn-out narrative where these two, at least for a few issues, best the Bat-Family.

Instead, we’re ushered to a finale before we’ve really gotten to know this new Victor and Nora. After one gorgeous two-page spread of their criminal hijinks, Nora is already rebelling and pulling away from Victor. He sees her as cruel and violent. She sees him as a control freak. These ideas aren’t bad. There was just no time to allow these themes and feelings to percolate. Victor, in particular, as a controlling husband is an interesting idea that could be explored and toyed with throughout this run. The same can be said of Nora’s personality change. In any other circumstance, these ideas would be character arcs.

This Freeze arc is even more disappointing when one considers that this whole Mr. Freeze storyline was teased repeatedly in the backend of the previous Detective Comics issues. Why the build-up? Why was this touted as some big “Year of the Villain” mini-event? In hindsight, it’s silly to think that Lex Luthor’s “big gift” was some formula that Mr. Freeze would have to tinker with in order to safely bring Nora back, only to have her run off by her lonesome to crown herself ice queen of Gotham.

Having said all that, I don’t fully blame the creative team for this lackluster story. As I mentioned before, it feels truncated, and I’m left wondering if Tomasi and Mahnke are the caretakers of this title until next year when Tynion assumes the core Batman title. This change in the lineup would allow DC the ability to institute a more coherent continuity across the titles. Perhaps DC doesn’t want anyone making any waves until they can figure out where they’re going with Batman on an editorial level?

Final Thoughts: Mahnke’s art continues to carry this title. While Tomasi is an impactful writer when he wants/is allowed to be, this issue is mostly paint-by-numbers plotting that serves only to rush us toward an unfulfilling conclusion. It’s yet another low-stakes, tension-less Batman story in a title that has been treading water since James Tynion IV left almost two years ago.