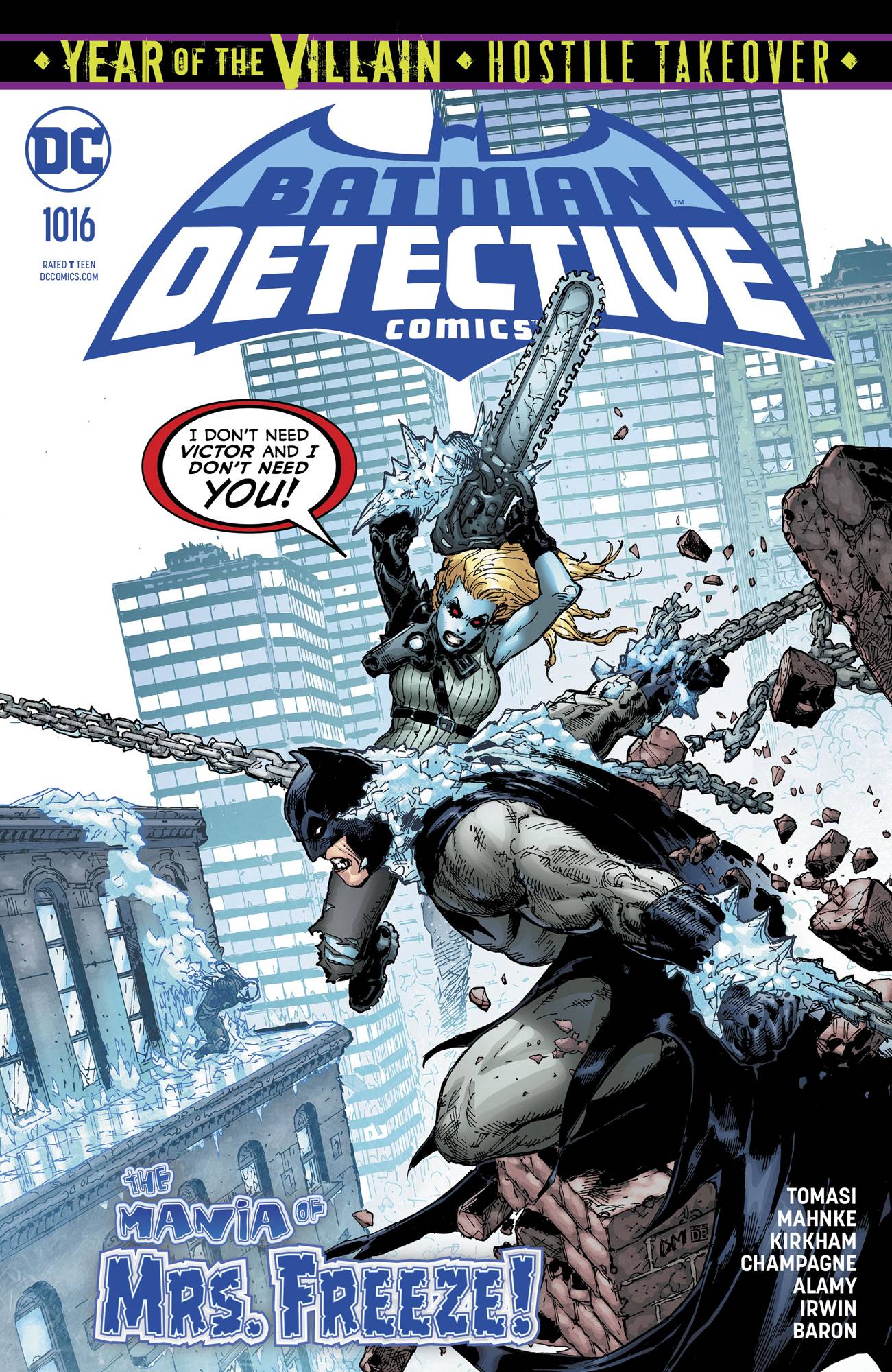 Overview: Batman and Mr. Freeze have their final showdown with Nora Fries in this conclusion to the Cold, Dark World story arc.

Synopsis (spoilers ahead): At Mount Hope Cemetery, Nora Fries finishes constructing an unseen ice sculpture. Sometime later, Mr. Freeze and Batman arrive to find that Nora left a mausoleum with Victor’s name engraved on it. Mr. Freeze takes it to mean that he’s dead to her.

Victor then confesses that he hacked into Lexcorp to find out more about this serum that brought Nora back. The serum was from flawed experiment Lex Luthor was tinkering with from the Forever Evil storyline. When injected, it makes its recipients mentally unstable. Mr. Freeze admits that he thought he could stabilize the serum and went ahead with injecting Nora anyway. Obviously, Victor’s modifications didn’t work, and Nora succumbed to the serum’s effects.

Batman probes Victor’s mind for any clue as to where Nora might have gone next. At the Gotham Museum of Art, Victor says, there is a statue called Little Dancer that brought tears to Nora’s eyes. The two then drive off to the art museum.

At the museum, Nora freezes two security guards near the Little Dancer statue. She sends one shattering to the ground, killing him. Before she can kill the second guard, Batman and Mr. Freeze intervene.

Victor tries to reason with his wife. He explains that the serum has made her unstable. It’s no use. Nora engages Mr. Freeze and Batman in combat. They fight until Batman captures Nora with a rope that raises her body temperature. She’s about to pass out when Mr. Freeze takes Batman out, trying once more to reason with his love.

Nora leans in close to her husband, feigning affection. She jams a syringe into Mr. Freeze’s head, injecting him with a serum that raises his body temperature. Nora leaps out the window while Batman comes to Mr. Freeze’s rescue.

Weeks later, Nora sits comfortably in a log cabin somewhere in Canada. She holds aloft a snowglobe of the Little Dancer statue and says, “This world isn’t going to get warmer. It’s going to get colder. A lot colder.”

At Arkham Asylum, Batman says goodbye to a frozen Mr. Freeze in Arkham’s cryonic wing. He notes the irony of Victor’s situation and then walks away.

Analysis: Whereas Detective Comics #1015 was all over the place, this arc finds footing and leads us to a somewhat satisfying conclusion. Confusing subplots involving frozen victims across town, a questionable Year of the Villain gift from Lex Luthor, and Nora Fries’ “big plans” for the future are quickly sidelined for a straightforward rush to a final showdown and a modest status quo change.

Rather than elaborate on these “big plans” hinted at in the final pages of Detective Comics #1015, Nora resolves herself to threatening her husband with an ice sculpture and waltzing down memory lane with a trip to the museum. As Freeze relays to Batman, Nora’s simply gone insane from the serum she was injected with. This explanation is far from the best way to handle her character, especially since we’ve never gotten to know Nora as anything other than a lost love forever encased in ice, but the simplicity of what’s at play in this issue makes this justification much more understandable than last issue’s bewildering lead-up to this finale.

With Nora’s escape at the end of the issue, she’s left on the board to explore further in a later arc. One would hope Peter J. Tomasi and Doug Mahnke could more adeptly focus on her as a person down the road, and with her having a relatively clean slate as far as personality is concerned, there are limitless story threads that could be explored with Mrs. Freeze. Without her husband in tow, she wouldn’t have to be married to his narrative either.

This is one area where this conclusion gains some credit. Rather than end by having Nora put back on ice and the status quo maintained, readers are at least given some kind of change. This change also inspires hope that this Tomasi/Mahnke run means something in the long run. Albeit a modest risk, it’s a risk nonetheless, and it feels refreshing in light of recent Detective Comics storylines.

Another highlight of this issue is Mahnke’s art. His work has a crisp and clean quality to it that meshes very well with David Baron’s colors. These two elements work in conjunction to really give this Cold, Dark World arc a pristine feeling that complements the Mr. Freeze-centric storyline. Mr. and Mrs. Freeze, in particular, are absolutely gorgeous to look at. The few pages where Tyler Kirkham fills in come off as a little messy in contrast to Mahnke’s pencil work, but overall, the art carries this story beautifully to the finish line.

Final Thoughts: The Cold, Dark World storyline has been a rollercoaster of ups and downs from issue to issue, but it manages to stick a moderate landing and leave enough of a story thread to get us excited for what may come down the road.