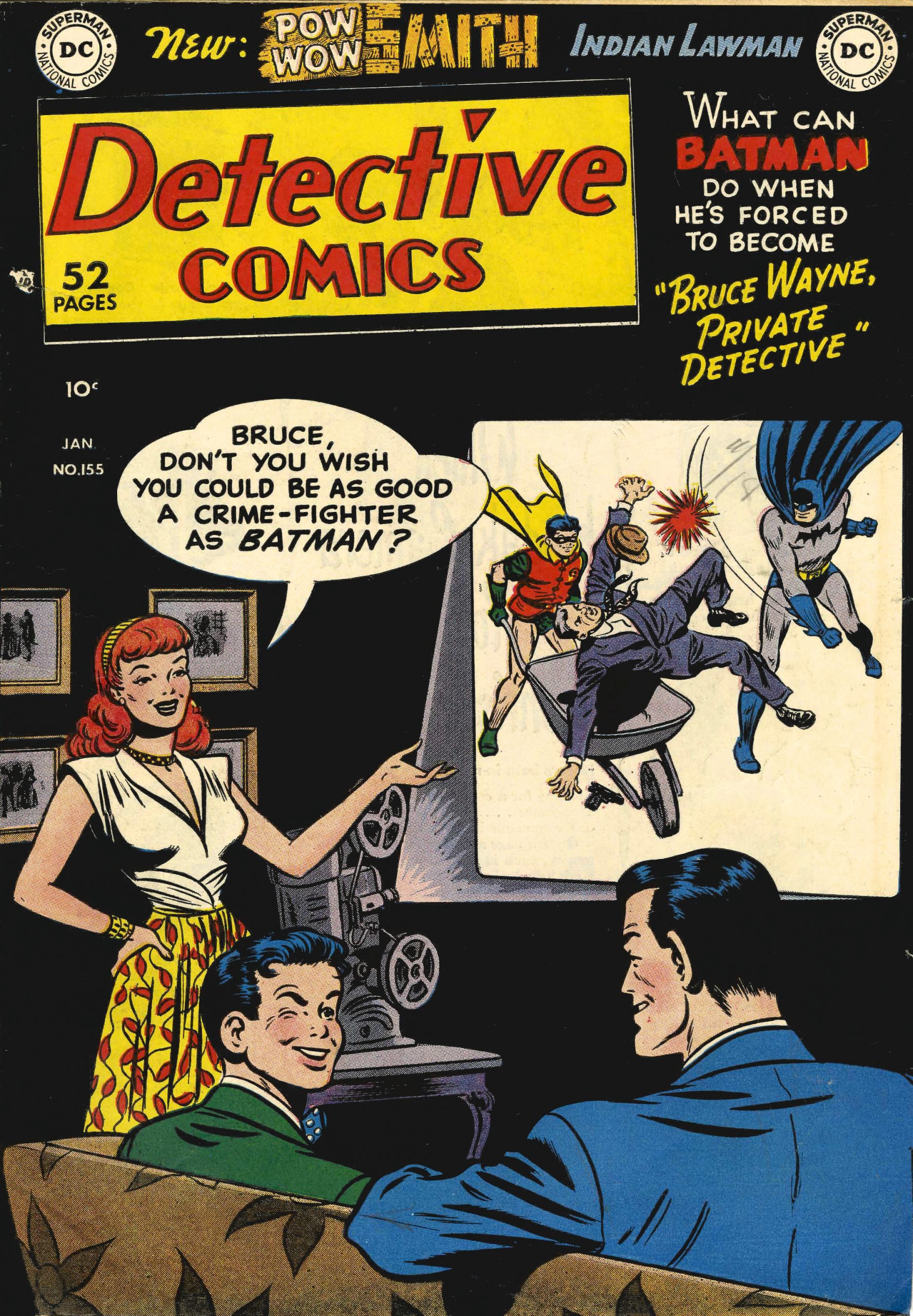 Editor’s Note: This series of reviews takes a look at prior comics from the history of the Batman Universe. More explanation of the choice of this issue will be explained below.

Overview: Bruce Wayne’s girlfriend bullies him into being a detective for a bit of time and hilarity ensues.

Synopsis (spoilers ahead): Our story begins with Batman and Robin giving Vicki Vale a tour of the Batcave as they show off some of their trophies from previous cases. Vicki inquires about a model train set, and Bruce explains how it belonged to a smuggler, who, when fighting Bruce, tripped over his own model train set and inadvertently saved Batman’s life. After the story, Batman and Robin escort Vicki out of the Batcave blindfolded.

Bruce, now in his playboy persona, is then having dinner with Vicki when he starts trash-talking Batman to maintain the illusion that he isn’t the caped crusader. Unfortunately, Bruce tells Vicki that he could easily be a detective if he tried, so Vicki runs him out of the restaurant and into the hospital. At the hospital, she introduces Bruce to a detective friend of hers who’s there for appendicitis. The detective agrees to let Bruce run his agency while recovering, and Vicki forces Bruce to take the job, where he spends each day reenacting film noir tropes.

Vicki doesn’t suspect a thing about how lazy, layabout Bruce Wayne is suddenly a super-sleuth. Instead, a new client sees the article Vicki wrote about Batman’s secret lair and spots the model train. He hires Bruce Wayne to speak to Batman and commission a sale for the model train. This seems simple enough until a second man comes to Bruce, also wanting the same model train. Now suspicious, Bruce and Dick investigate the model train for any clues and then send a fake replica of the train to the first man. When the man is angry that the train works, and thus couldn’t be whatever he wanted, Batman confronts him. The two fight, when suddenly the second man appears.

The two would-be train collectors agree to work together and put Batman in a deathtrap. Batman is unable to escape, but he does get a warning out to Dick, who comes in and saves Bruce from death. The duo race back to Bruce’s detective office to wait for the crooks to return. Bruce dons his civilian clothes. The duo hears a knock at the door, but instead of criminals, it’s Vicki coming by for a date. Before Bruce can shoo her away, the crooks arrive and make it impossible for Bruce to intervene without placing Vicki in peril.

With some quick thinking, Bruce is able to distract them with a second fake train that he had in the detective office. Vicki is knocked unconscious as the men run away with the train. After confirming Vicki’s safety, the dynamic duo changes back into Batman and Robin and run after the criminals, beating them unconscious, and delivering them to the police. Bruce and Dick double-check on Vicki before leaving a cliffhanger that they know what all this trouble was really about.

It turns out the electric motor in the Model Train was actually a set of wire used for a wire-recorder that the smuggler had used to blackmail his criminal employers. The men that Batman and Robin had fought were being blackmailed when Bruce originally shut down the operation. And with that, all’s well that ends well.

Analysis: This new review series is where I take a look back at old comics that would have come out this month (I would be more specific and boil it down to the week, but the wikis aren’t that exact sadly). This month I rolled the year 1950, so I had two choices to pick from with either Detective Comics #155 or World’s Finest #43. I held a poll on my twitter and ultimately the winner was Detective Comics #155.

I came into this expecting a basic and otherwise forgettable story. Instead, I got both a pretty well-written mystery combined with some genuinely brilliant art and panel design. The mystery is basic, yet impossible to figure out since it demands readers know about wire recorders. Admittedly, I didn’t even know these existed, but they seemed to be common enough around World War II.

Otherwise, the story is kind of ridiculous. A private detective is totally okay with his business in the hands of a civilian while he’s in the hospital. Said civilian becomes a master detective overnight, and his reporter girlfriend doesn’t bat an eye at it. Honestly, it’s just as ridiculous as the premise sounds, and I love it.

The story also makes a clear point to have Vicki’s existence matter to the characters around her. It implies the writers actually respect Vicki, even if she’s just a plot device for this entire issue. The story makes a clear effort to make sure that Vicki is safe after she gets knocked out and then follows up on her afterward to ensure that she’s not suffering any injuries when she awakens. Most contemporary comics might just leave her unconscious and not even bother.

But the BIG selling point of this story is the art. Some of this art is amazing, and the panel layout, while not as refined as some panel work these days, is very sophisticated and leaves me wanting more and more. It’s incredibly inventive and dynamic. Definitely not what I was expecting from a comic that came out in 1950.

Final Thoughts: A pretty good story. Good enough to recommend the entire comic all by itself, though this isn’t a singular story.

Overview: Is the show’s newest attraction all it’s cracked up to be?

Synopsis (spoilers ahead): Roy Raymond runs a talk radio show where he shows off things that seem unrealistic but are actually true. A mind reader joins the program to prove his abilities work, which results in his abduction by criminals wanting to use his powers to commit crimes. The boss has the mind reader commit a bunch of crimes using his powers only for the mind reader to reveal that he and Roy had conned the crooks by feeding them false intel and leading them into a trap.

Analysis: This story is really bad and honestly betrays its own premise both out of the narrative and in the narrative. The opening narration promises that even Roy Raymond is dumbfounded by the mind reader’s ability when really he was in on the con, and the show itself promises to only reveal the truth, only for Roy and the mind Reader to actively lie to their audience about the mind reader’s abilities. The criminal mastermind is also an utter moron, mailing the mind reader his plans written in paper and admitting he doesn’t even plan on selling the jewels he steals, wanting them purely for their aesthetic value. The story is supposedly about Roy Raymond, and yet he does absolutely nothing for the majority of the comic.

Synopsis (Spoiler’s Ahead): During the Civil War, some rebels decided to steal a train carrying supplies to Confederate troops. They ultimately failed, but their efforts reinvigorated Northern support for the war. The entire comic is just a history lesson on how the Congressional Medal of Honor was first implemented.

Analysis: Honestly, I’m not opposed to using comics as a space to give history lessons to children. Wonder Woman did the same with educating people on important women in history, and I loved it. The issue I have is that the Congressional Medal of Honor isn’t something I’m that eager to learn about, especially since the people involved lost, and the story isn’t very engaging. Perhaps if the creative team had focused the story on the rebels’ arrest and the North’s reaction, rather than focusing on an act that was futile and ended in a disaster, it would have been more engaging to read.

Final Thoughts: Interesting in concept, but kind of boring. At least it was short and easily skipped.

“The Ranger From Red Deer Valley”

Overview: A Native American detective avenges his own people while dealing with racism.

Synopsis (spoilers ahead): Ohiyesa, dubbed “Pow-Wow Smith” by the whites, is a Native American in the Wild West who becomes a ranger after he learns that a friend of his was murdered by a white criminal. Already respected by the existing rangers, sans one stupid newbie, Ohiyesa and his white tag-along go in pursuit of the criminal. After some scraps and tussles, Ohiyesa and his sidekick manage to kick butt, take names, and get revenge.

Analysis: I barely have enough time to properly go into why this comic is actually really good in my opinion, but rest assured, this is pretty progressive for the time it was written in. It includes better Native American representation than most modern DC Comics has to offer us, which says a lot about both eras of comics. I refuse to call Ohiyesa by his ridiculously racist nickname of “Pow-Wow Smith,” but he and Bob make for a pretty good Batman and Robin of the Wild West, with the comic at least portraying Ohiyesa with as much respect and dignity as they afford Batman. The villain of the story, The River Wolf, is a compelling criminal for their first issue and feels like a legit danger for Ohiyesa to deal with. I’m actually going to be going ahead and reading some of the follow-up issues just to see what they do with Ohiyesa since this was his debut issue.

Final Thoughts: I honestly wish I had more time to gush about this comic, but this is a Batman site, not a Pow-Wow site, so just take my word for it that I really liked this issue.

Overall Thoughts: This comic, overall, was well worth the read. The excellent art and panel work in Batman and the amazing story and potential in Pow-Wow Smith make up for the rest of the shortcomings in this book. I came for the Batman but stayed for the excellent Native American representation. Good reading, friends.