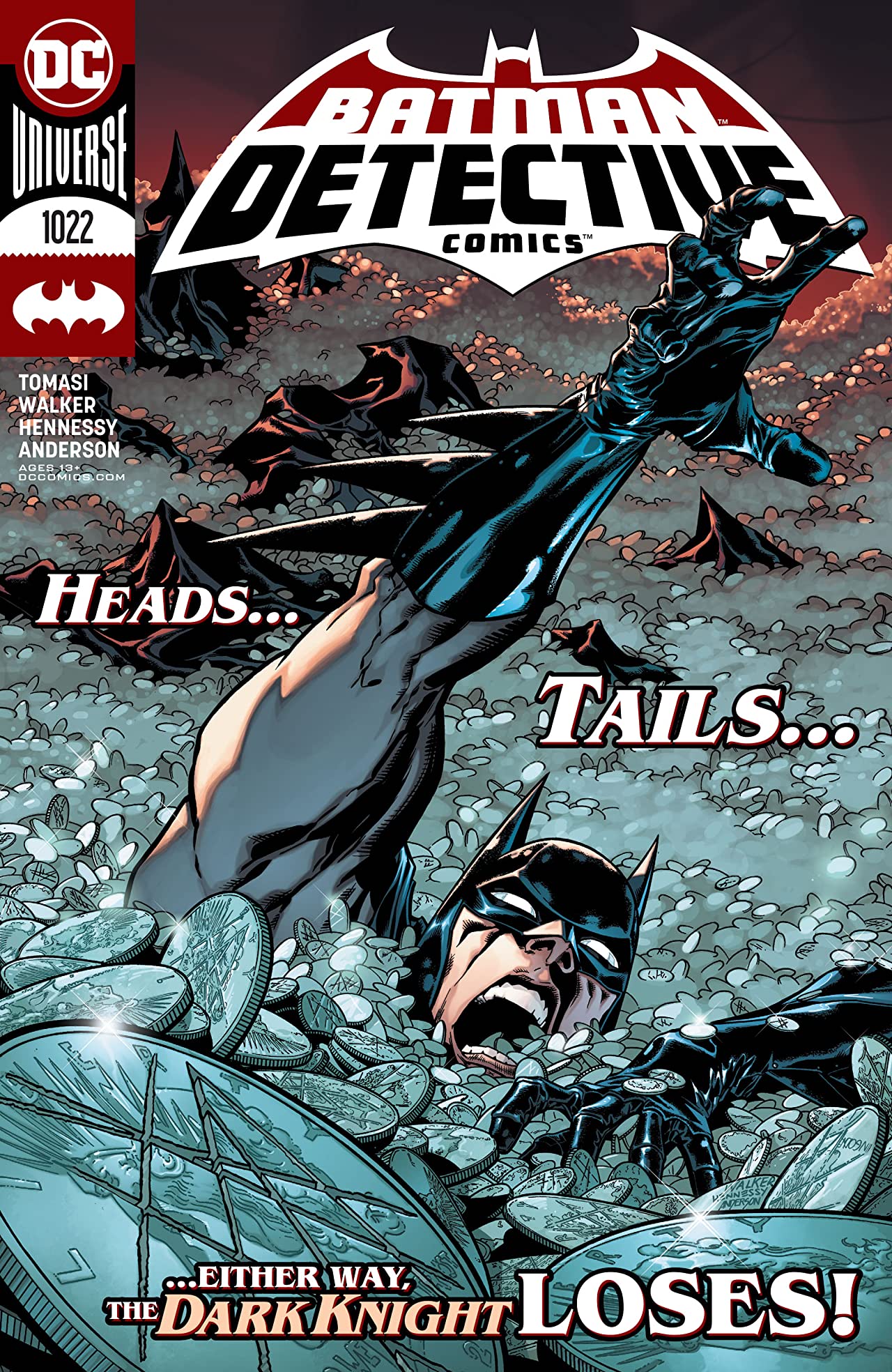 Overview: As we edge closer to the events of Joker War, Batman learns more about the events leading Two-Face’s Church of Two and the true mastermind behind it all.

Synopsis (spoilers ahead): Batman awakens and finds himself tied up and dangling over a vat of acid. Two-Face is explaining some of his recent events – the sudden changes between Harvey and Two-Face, the further scarring of his body, his new church, the coin’s important role in it all. As he flips it to the scarred side, he tells Vice, one of his main followers, “do no good” and sends him off. Harvey feels it’s time for Batman to joins the ranks via baptism. As Batman is lowered into the vat of acid, he frees his hand from the dissolving rope and fires spikes from his gauntlet, which burst through the metal vat, sending acid across the floor.

As the acid spreads across the floor, Two-Face’s disciples sacrifice themselves in order for their leader to make it to higher ground. As Harvey climbs, Batman seizes his utility belt to retrieve the grapple gun. He fires it, creating a tightrope across the room. As Batman gets away, he tells them to grab hold to save themselves.

At the site of the future home of the New Hope Children’s Hospital, Vice and another goon are setting plastique explosive charges in plain sight of the kids’ wing across the street. Confused, the kids watching wave and hold up signs to the strangers outside of their window. Vice’s partner is not feeling the idea of blowing up the site so close to the children’s wing. Vice fails to have him refocus, and as he turns to leave, Vice pushes him off of the ledge. As he falls to the ground, Batman swoops in and takes out Vice before he can finish setting the final charges. Before leaving, Batman gives the kids a smile.

In another part of Gotham, Batman is speaking to the wife of one of Two-Face’s followers, who is presumed dead. She gives details of how he was able to get out of prison after his terminal diagnosis and the terms that allowed her and the family to be financially set for life. Batman promises her that she would have no trouble from him and leaves. He returns to Vice, who was tied and gagged, and questions him further about how he came to know Two-Face. Vice explains that he was living on the street. He and a partner found Harvey with a self-inflicted gunshot wound to his head. Unconscious, but still alive, Vice and his partner auction Harvey’s body off to the highest bidder. Days later, the Joker shows up with the money. They take Two-Face to Hugo Strange, where Strange surgically places a device on the bullet in Harvey’s head. This device, which included tweaks by the Mad Hatter, would allow the Joker to place different thoughts and bouts of memory loss into Harvey’s mind.

In another part of town, the Joker is trying to break through some concrete. Frustrated, he takes out a stick of dynamite and blows up the concrete. As the dust settles behind the Joker, a crumbled statue of the Court of Owls appears. The Joker has a new recruit.

Analysis: Detective Comics is back. Its return now brings us closer to its role in the upcoming Joker War event as Peter Tomasi reveals the true man behind the curtain. As someone who reads solicitations, I knew this was coming and therefore wasn’t surprised. There are some good things and bad things about this.

First the good: We finally get some answers. What is going on with Two-Face and his church of followers and, most important (at least for me), what’s with the leaking wound in Two-Face’s head. It all lays with one person, the Joker. I truly appreciate Tomasi tying the post-Rebirth universe to the events of the New 52 and his spectacular run on Batman and Robin (this made me pull a few issues out again to recollect myself). That volume, more than anything, made me a true fan of Peter Tomasi (consequently, it’s also why I’ve been somewhat underwhelmed with the run on Detective so far). What’s better is that we find ourselves in a position where both main Batman titles will be lining up to cover the events of Joker War (as well as other Bat-Family titles). One complaint that has always come out, especially since Rebirth, is how the titles weren’t on the same page from a timeline standpoint. Hopefully, Joker War resolves that. Peter Tomasi and James Tynion have worked together on a few projects, including the recent Alfred Pennyworth: RIP one-shot. Hopefully, they will use their relationship to continue moving Batman in the same direction.

The artistic team of Brad Walker, Andrew Hennessy, and Brad Anderson continue to provide great visuals. I’ve been a fan of Walker’s since he was placed on Detective and look forward to seeing what this team can do moving forward.

So, for the not so good: We finally got some answers on Two-Face and his disciples. I am not a fan of how it seems this story is going to end, at least with how Two-Face is portrayed as a pawn. Like the Joker, Harvey Dent is an A-list villain in Batman’s Rogues’ Gallery. Having him as a pawn in a Joker story doesn’t quite sit well with me UNLESS Tomasi circles back to this somewhere down the line. If he does, I’m okay with calling this a wash.

Finally, I need to add one thing that I loved… the smile. Tomasi and Walker adding that one panel to show a human side of the Dark Knight and the kids’ reaction to him was an absolutely perfect touch. Perfectly timed move.

One of the biggest concerns with Tomasi’s run on Detective thus far has been the lack of memorable stories (and good stories in general). This current arc has gone back in forth in decent storytelling. While Detective Comics #1021 was sort of lackluster, as we approach the conclusion of the arc Two-Face, it’s my hope that these bread crumbs leading to Joker War will keep things on the uptick.

Final Thoughts: As we get closer to the event, I am hopeful that we will finally see the two books (if not the entirety of the TBU titles) line up with one another again. Things have been out of whack for quite a while, which could make reading quite nerve-whacking.