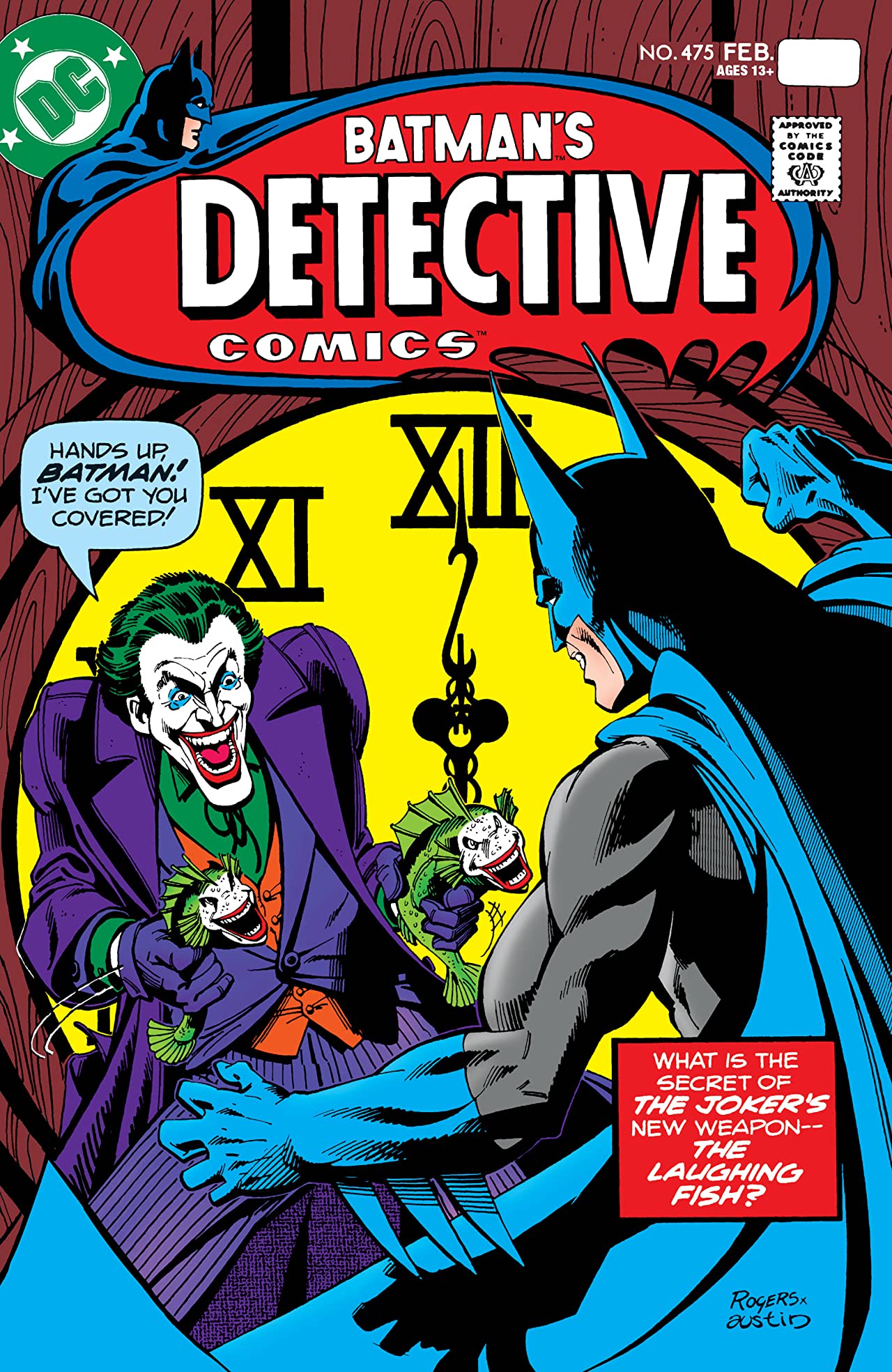 Synopsis (spoilers ahead): While dealing with personal troubles involving his girlfriend Silver St. Cloud, Batman uncovers an alert from some fishermen about a bizarre situation. All the fish they’ve caught have Joker’s face on them. This proves to be beyond an isolated incident as all over the world fisheries are reeling in catches with the clown’s cowl covering them. As this reaches the news, Joker sends his men to hijack a copyright firm and threatens the man in charge to help him copyright the joker fish he has created. The clerk whimpers that it can’t be done and Joker threatens to kill him by the end of the day if he doesn’t comply. Joker then murders one of his own goons as they leave for asking what the Joker plans to do next.

Meanwhile, Joker runs into Rupert Thorne, who is also dealing with personal troubles brought on by the past issues. We hear Joker’s iconic monologue about how he doesn’t want to know Batman’s identity and that he also doesn’t want anyone but himself to defeat Batman. Rupert Thorne then drives off in terror of his own paranoia and leaves the story.

Joker then returns, having broadcasted a threat that he’ll kill the copyright clerk at midnight, in a direct homage to his debut appearance. Batman, Commissioner Gordon, and the Gotham City Police try to protect the clerk, but Joker lets loose a chemical agent that only reacts to a secondary chemical Joker had placed on the clerk in their last meeting. The clerk dies, and Joker is still loose.

The issue ends with Rupert Thorne picking up Silver St. Cloud on the road out of Gotham. Just where are they heading?

Analysis: This issue is iconic for a reason. It’s been paid tribute and beloved for its wacky and absurd gimmick. It’s a cherished go-to for “insane Joker plots” and a classic Bronze Age story. That said, it’s bizarre of me to say that I don’t actually like this story that much.

Joker’s actual plan is so simple and straightforward, except it takes up the majority of the comic. Joker makes the fish have his face. Joker tries to copyright his face. Joker has a cool monologue. Joker threatens to kill someone on live TV. Joker kills someone. There are no hiccups and no twists or turns. The way Joker kills the clerk doesn’t even feel clever. The audience knows nothing about chemistry, so by all accounts, Joker just used magic to kill the guy. And there’s no clever setup. No clues at the beginning to hint how the Joker is planning to kill the guy. It’s all explained after the fact.

This main conflict of Joker’s fish, which takes up the majority of the issue, also has nothing to do with Batman’s own inner conflict. I’ve talked up the old Bronze Age a million times, about how amazing it is and how all the characters feel like they are living their own lives isolated to Batman. Here, their lives are too isolated from him. The only major characters who show up, who aren’t related to Joker’s fish, are Rupert Thorne and Silver St. Cloud.

Rupert was involved in an auction a few issues ago held by Hugo Strange to try and uncover Bruce’s identity. This is big stuff. All Rupert is concerned about is the ghost of Hugo Strange coming back from the dead to murder him. Batman is also concerned about his identity but not because of Thorne and Strange. Batman believes that Silver knows his secret identity. Yet, this conflict doesn’t go anywhere.

The issue begins with Batman confronting Silver about it, but getting cold feet when Silver plays dumb. He then ponders to himself about Silver as the story goes on, but nothing actually develops as a result. Batman just monologues to himself. The issue ends with Silver running out of town without even telling Bruce. The fact that she’s with Rupert Thorne may lead to an interesting story NEXT issue, but in this issue, nothing is happening.

It’s a bad idea to have the more interesting half of your story take place in the background.

That isn’t to say the story is all bad. As I said, this story is iconic. Not only because of its relation to the past, but also its homages to the future. Joker televising his death threat is a perfect reference to his debut issue and something I wish was done more often. The premise as well is something so absurd it definitely works to make the reader want to know what happens next. The only problem is the story can’t really deliver on its own hype. There’s no hidden layer to the story. The fish are just fish.

Now, the art is different. Done by the great Marshall Rogers and Terry Austin, every panel in this comic is a work of beauty. Mixtures of abstraction, modernism, and pop art. There’s even a unique bit of inking for you art specialists out there that I’ve never seen before, done by Terry Austin, which uses a very unique pattern to indicate shadows in an intense close-up shot of Joker’s face. The colors are perfectly solid. Every object is one color, and there’s no bleeding like in old Golden Age comics when they used a marker. Every shade is a perfect saturation to react with its neighbors. Every inked-line thick and thin at just the right points. If I was to teach a course on comic book art, I’d throw out every other comic and make an individual lesson dedicated to every unique panel drawn in this comic.