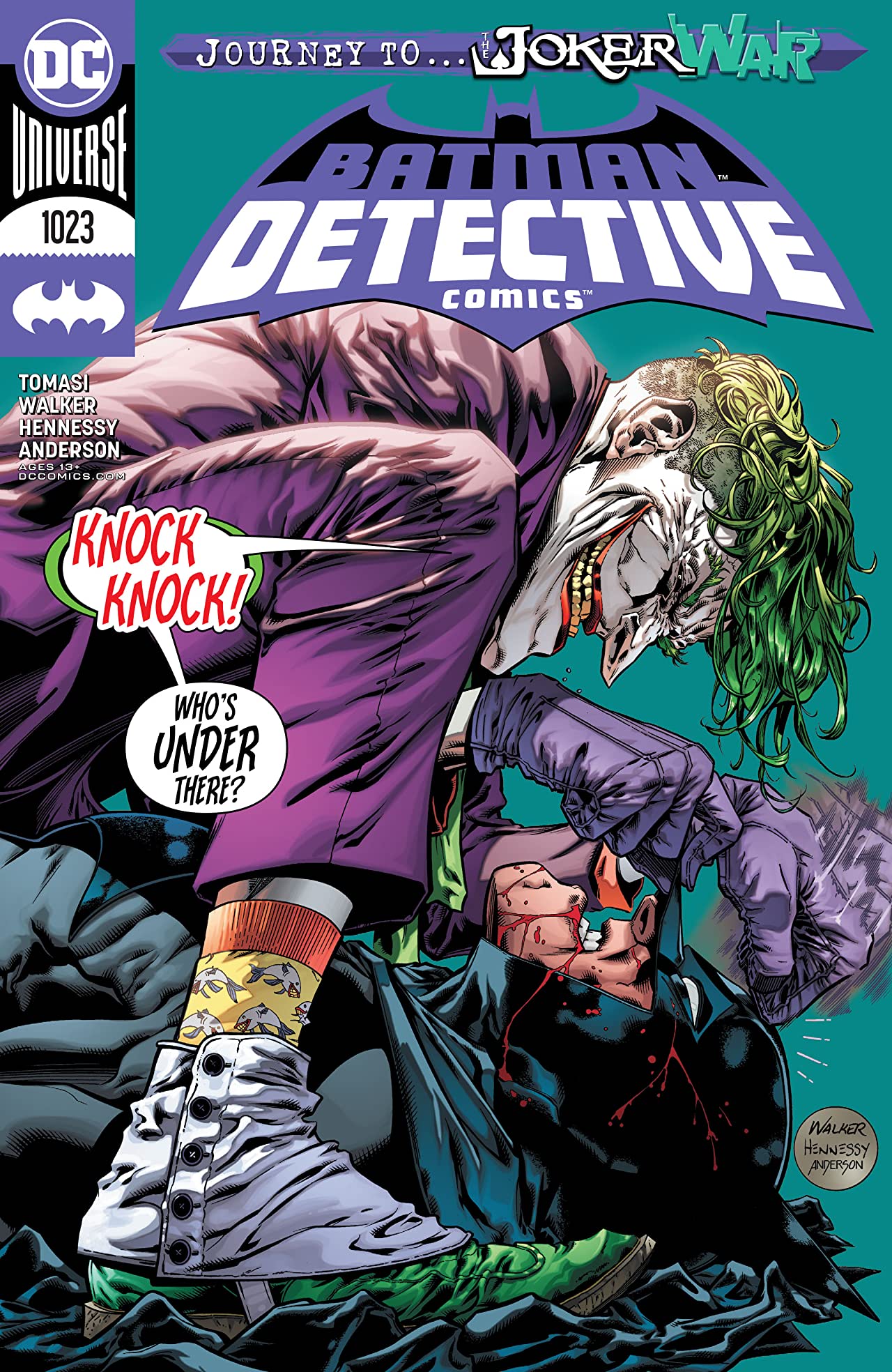 Overview: While Batman continues his search for Two-Face, the Joker continues to put his ultimate plan in place by getting another well-known recruit to join his army.

Synopsis (spoilers ahead): Beneath the streets Gotham, the Joker makes his way through the crumbled rock and finds himself standing in the midst of the Tomb of the Unworthy, the resting place of dead Talons. As he searches the multiple stone coffins, he stops at one with the initials “LM” inscribed on it. He’s found his target. He pries open the sarcophagus and injects the resting figure with a serum taken from a member of the Court. Minutes later, Talon Lincoln March rises swearing devotion to the Court of Owls. The Joker responds that his loyalty belongs to him.

Back above ground at the Gotham Courthouse, Batman is still in pursuit of Two-Face. He’s wondering about the connection between Joker, Hugo Strange, and Mad Hatter to Harvey’s current state of mind. He sets out to find them in the hopes of them leading him to Two-Face. He sets out and “questions” known accomplices until finally, Batman finds where these villains are said to be hiding. He crashes through a window and quickly dispenses of Strange. Before he could get to Mad Hatter, he’s hit with a hypnotic device that brings unwanted visions into his head, including a now-dead Alfred, who stands before him with a broken neck.

As Batman holds the head of Alfred in his hands, he awakens enough to smash Tetch’s device. With a clear head, he quickly takes out the Mad Hatter and returns to a now-awake Strange, asking him again the whereabouts of Two-Face.

Strange leads Batman to an old Gotham police armory. Batman calls for Harvey to come out. Batman explains that he knows what was done to Harvey and how Harvey is being manipulated. Two-Face responds that no one controls him and attacks Batman in a prototype of the Jim Gordon batsuit. As the two battle, Batman devises a plan to incapacitate the suit and bring Two-Face down. He continues to try to reach Harvey, but Two-Face is having none of it. Batman ruined his plans and destroyed his church. Now, he must pay. Batman hits Two-Face with a blast.

As Batman moves in to make his final move, Two-Face stops him again. As he gets up, Batman realizes there’s a cracked in the JimBats face mask, exposing part of Harvey’s face. New plan… Batman cracks the remainder of the face mask and places a device on Two-Face’s temple. A shocking blast is administered, bringing Two-Face to his knees. As Batman approaches the wounded Harvey, something flies into him, taking him to the ground. Batman looks up to see Lincoln March standing above him with an army of Talons standing behind him.

The Joker sends his regards.

Analysis: I should really like this issue better than I do, but there are some obvious issues/questions that take away from the issue. I’ll get to those shortly. Let me say, though, that if you haven’t read Scott’s review of Batman #94, please do so as I will touch upon that issue in my analysis.

First, there’s the good stuff. This issue had some decent action in it. Seeing Batman mow through Hugo Strange, Mad Hatter, and Two-Face was nice to see and allowed for a quick read. The action didn’t take away from the dialogue either (I’ll have more about that in a bit). The battle of words between Batman – forever trying to save his friend Harvey Dent – and Two-Face – the one who refuses to let it happen – as they fought throughout the armory is a good example of how the action and dialogue fed off of each other. Special kudos to the art in the part of the issue for continuing to highlight the mind battle between Harvey and Two-Face.

As someone who was not a fan of Scott Snyder’s run on Batman, and even less of a fan of the Super Heavy arc that ended it, I’ve always liked the idea of the concept of the JimBats batsuit, especially after Jim Gordon stepped out of the suit and left us with Rookie. Walker, Hennessy, and Anderson’s rendition looks absolutely wonderful on the page (Note to self: figure a way to make that panel a wallpaper). This is not to say that the rest of the art was bad as it wasn’t. Throughout this entire arc, the art team has been the least of the problem.

Now for the not so good…

Those who listen to the Comic Cast, or who have read my previous reviews or Discord comments (If you haven’t joined TBU on Discord, what are you waiting for?) know that one of the things that I have consistently clamored about with the Bat-Books is how disjointed they are from each other. This was definitely present during King’s run on Batman. As Tynion took over, we started to get little glimpses that perhaps some uniformity was coming, and with the announcement of Joker War, hopes increased even more.

This issue of Tec is listed as a tie-in to Joker War (technically it’s a prelude since the main event hasn’t started yet. Even knowing this, the disjointedness is still present and obvious, in my view. This view isn’t just directed at these two respective issues (Batman #94 and Detective #1023), but it is more clearer here. As I read this and Batman, these are some of the issues I see:

Of course, one could make the argument that the events of Tec occur before the events of Batman, but how far can that be considering both of these are supposed to be lead-ups to the main event. Of course, everything can be brought together by the end of the next issue. History, unfortunately, doesn’t give me much hope. I will always argue that this is due to true leadership at the editorial level as much as it is the writer.

Final Thoughts: As we get closer to the events of Joker War, I still find myself looking and hoping for solid cohesion between the Bat-Family books, particularly its two flagship titles. The glimpses are visibly there, and the missing pieces are there for the taking. I continue to remain hopeful that Tomasi’s experience will get it together.