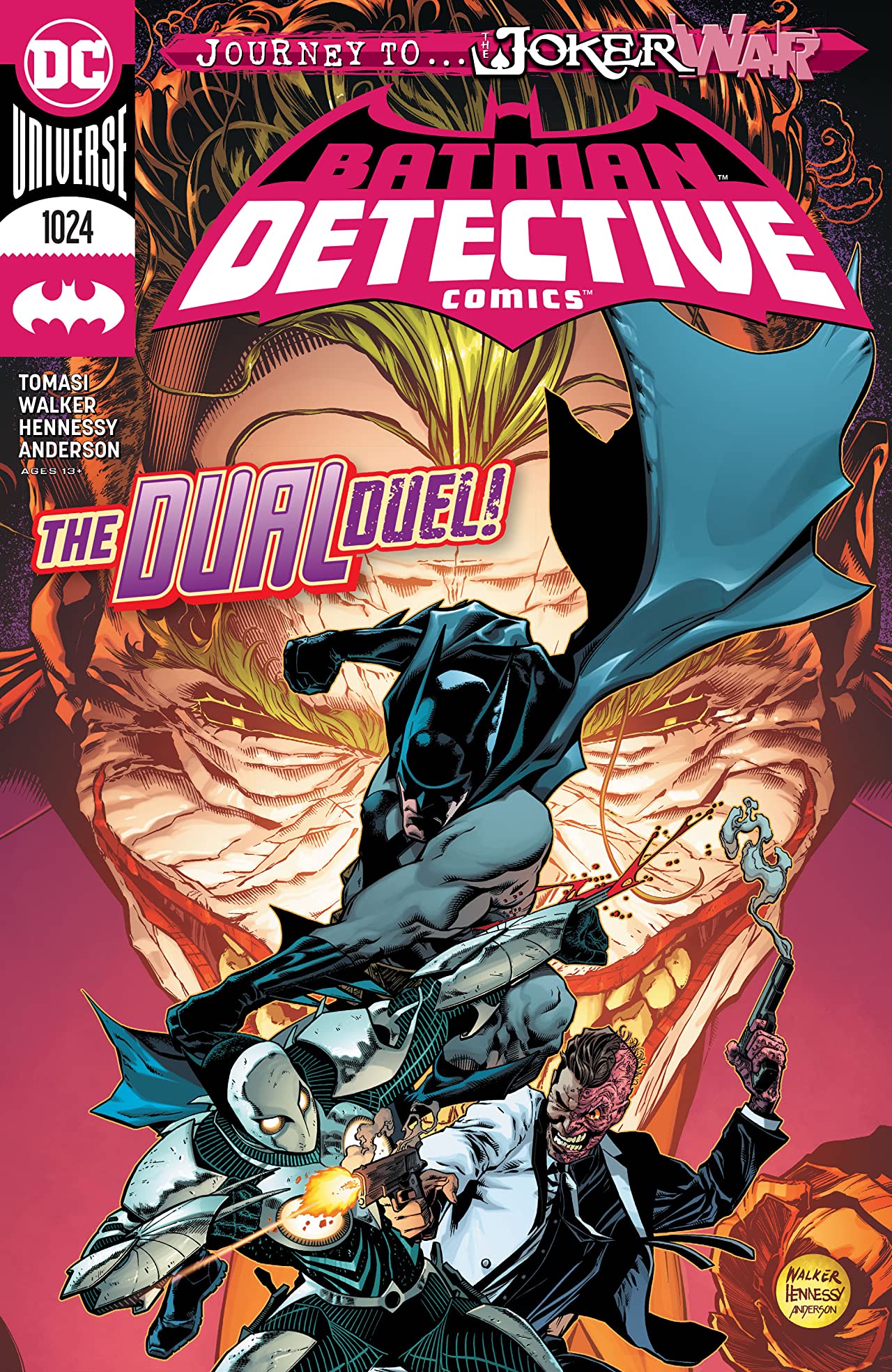 Overview: The final issue of the Detective Comics’ prelude to Joker War brings Batman face to face with Lincoln March and an army of Talons doing the Joker’s bidding. How can he tackle this while still trying to reach an enraged Two-Face?

Synopsis (spoilers ahead): Batman stands to face off with Lincoln March and the army of talons. As they approach him, Batman attempts to reach Harvey’s side of Two-Face, reminding him of how the Joker manipulated him. As Two-Face’s followers enter the armory, Batman asks Harvey to choose a side. Harvey responds by firing at the Talons.

As the battle rages on, little does Batman know that the Joker is listening and watching everything through Lincoln March’s mask. He’s reveling in the chaos he’s created, even as Batman gets his best in from Lincoln March’s attack. As Two-Face and his followers continue their battle with the other Talons, Batman reminds him that the assailants are already dead. This causes Two-Face to unleash a barrage of gunfire from the Rookie prototype he still occupied.

The Joker decides to tilt the scales. He sets off the mind implants that are in the heads of some of the Church members, incapacitating them.

The fight between Batman and Lincoln March continues. Batman gets the upper hand and with one crack, knocks the Talon mask from March’s head, revealing that he’s been infected with Joker toxin. Breaking the mask breaks the Joker’s visual link to see the ongoing battle, but he maintains an audio link and gives March one final order to take Batman out.

March lunges on top of Batman and begins ferociously pounding him. Batman has had enough. He blasts March with an ice weapon taken from Mr. Freeze. The other Talons, however, are starting to overtake Two-Face and the Church of the Two. Batman urges Dent to push the Talons his way. Two-Face, on the other hand, has his own plans. He tells his followers to get out, and he unleashes one huge, final barrage of missiles into the hoard of Talons, blowing them and some of his straggling followers away.

As the smoke clears, Vice and Versa search for Two-Face. As Versa approaches him, Two-Face grabs him by the neck, accusing him of betrayal. Before he can do anything treacherous, the prototype suit locks up. Confused as to what happened, Two-Face asks Versa what happened. Batman appears behind him, stating that he shut the suit down. He needs Two-Face immobile, so he could perform surgery. He explains how he “convinced” Hugo Strange to give him the equipment needed to remove the bullet from his brain. Batman sanitizes the room, syncs up the endoscope with the visors in his cowl, and proceeds to slowly move the device into Two-Face’s brain. As Batman continues his work, the Joker continues his monologue, saying that Batman will have to choose which side of Two-Face’s duality to kill. Batman grabs the bullet with the endoscope. Harvey Dent returns.

At Blackgate Prison, Harvey Dent sits in his cell, giving legal advice to an inmate seeking help. In fact, a line of inmates has formed, looking to meet the former Gotham D.A.-turned-prison lawyer. This doesn’t apply to Dent’s next visitor, who claims Dent put him away some time ago. Harvey states that he’s not that guy anymore, nor is he the mob boss Two-Face, who the visitor remembers working for a while back. Dent just wants to help guys who received a raw deal. Dent’s visitor comments that being on both sides of the law is a skill that could help many of the inmates.

As the visitor gets up to leave, he places the used bullet on Harvey’s cell door. The visitor – Matches Malone – says that the bullet is a gift from a friend. The issue ends with Batman swinging away from the prison with “Matches” in tow.

Analysis: We have come to the end of Peter J. Tomasi’s “prelude” to the Joker War. Once again, I find myself liking this more if it was a standalone issue or arc outside of the overall Joker War event. The last few issues were pretty good if looked at from that perspective. We see Bruce team up with his old friend in taking down the onslaught from the Joker. The issue, while a very quick read, has a lot of action to make up for any lack of dialogue. In fact, there was a good balance of action and dialogue as Batman held off Lincoln March and his army while still reaching out to save his old friend. Batman’s relationship with Two-Face has always been one that I have appreciated as truest outside of Selina Kyle. Bruce has never given up on trying to reach his friend and old partner against crime. The creative team does a good job of illustrating this.

I would also be remiss to not point out my joy in seeing Two-Face get back at Joker, somewhat, for manipulating him. I called it a while back and am happy to be correct. As stated back then, Two-Face is an A-list member of Batman’s rogues’ gallery. It was good to see in the end that he was treated as such.

As always, the artistic team of Brad Walker, Andrew Hennessy, and Brad Anderson (with an assist from Norm Rapmund) shine in their artistic storytelling. As has been said multiple times throughout this run, their artwork has been the least of concern, and I look forward to their continued contribution.

As mentioned before, this arc would be much more enjoyable as a standalone instead of the “prelude” title it was given. Too many holes and questions exist. Batman knows Joker is behind the manipulation of Two-Face and bringing back the Talons. If the timeline for this arc is before the events in Batman, how come Batman doesn’t put two and two together to realize a trap is in place. Once again, where’s Lucius Fox and Selina Kyle? In fact, one would think Punchline would be around at this point, helping put things in place for the oncoming war. In Tynion’s run-up to Joker War, Joker makes clear that he needs Batman alive to execute his plan of seizing the Wayne assets and bringing Bruce through hell before ultimately taking him out. Lincoln March obviously doesn’t get this memo in Tomasi’s issues as his mission is to kill Batman. What’s the difference? Did Joker always know that Talon was doomed to fail and sacrificed him and the other Talons as such? As with the last issue, these lingering questions make the final issue of this arc less than what it should be. I can only hope things are better as Detective Comics now goes to war.

Final thoughts: Now comes the Joker War, where hopefully we see things all tied together. And then it’s on to issue #1027, making it a great time to be a fan of Detective Comics.