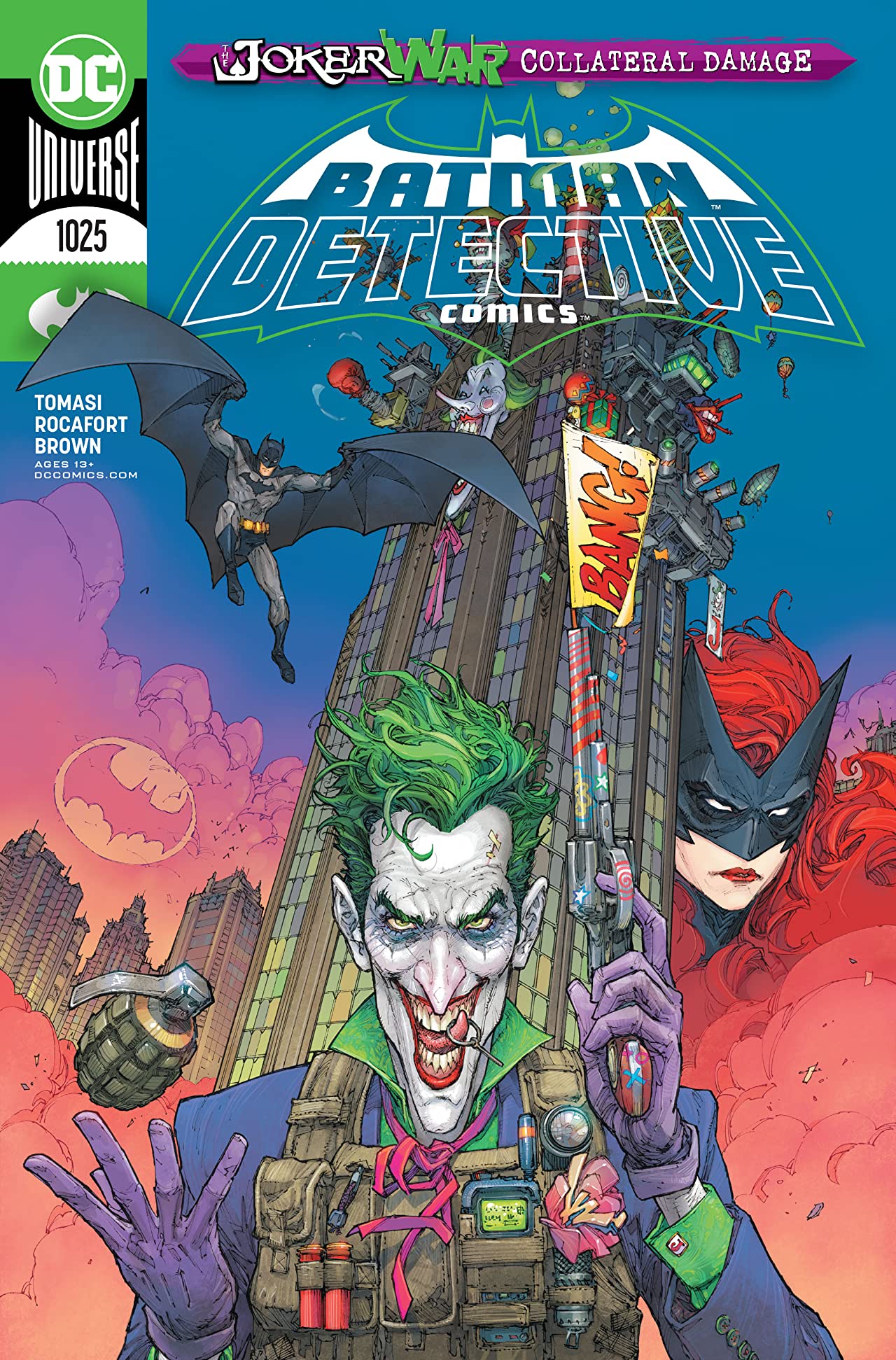 Overview: Kate Kane enters the Joker War as Batwoman assists Batman and the GCPD in taking on the Joker’s goons.

Synopsis (spoilers ahead): At Holy Cross Cemetery, Batwoman springs into action to assist a trapped GCPD as they come under a barrage of blasts from Joker’s goons. As she keeps the thugs at bay, Harvey Bullock and the GCPD make their move to fight back.

At Wayne Enterprises, a Jokerized Lucius Fox, struggling to resist the influence of the Joker toxin, uses Wayne tech to mass-produce drones to assist the Joker’s goons at the cemetery. One of them heads in the direction of the cemetery.

As Batwoman and the GCPD struggle to maintain control of their battle against the Joker clowns, Kate attempts to get the officers in line to surround their assailants. The officers resist, however, until Bullock gets them in order. As they begin to make their move, the Joker Wing arrives and attacks. As it comes back around for a second pass, Batman appears and takes the drone out with an EMP blast. Unfortunately, a second drone appears and knocks Batman from on top of the vault he was standing on before being taken out by the GCPD. Batwoman helps her cousin up, and they eventually head to Wayne Enterprises.

At sub-level 3 of Wayne Enterprises, Lucius sits at the controls of the 3D printers with a gun to the back of his head. Suddenly, the floor begins to shake, and before the clowns can react, Batman bursts through a wall at the helm of a tank-like vehicle, Batwoman manning the guns (don’t worry; they’re stun emitters). Batwoman quickly dispatches of the Joker clowns while Batman uses a large cannon-type gun to not only destroy the 3D printers, but also the drones sent to attack them.

Batwoman takes out the goon with the gun on Fox. As Lucius succumbs further to the effects of the poison, Kate gets him to Batman, who quickly administers an anti-toxin to his long-time friend and employee. It won’t completely stop the toxin, but it will slow it enough for Bruce to get Lucius to safety.

As Batwoman leaves to handle another problem area, she agrees with Batman that they will need to take the Joker down hard. She’s going to do what she does best.

Analysis: I sit here typing this analysis with a smile as there is a lot of good that has occurred with the issue. Let’s first look at the most glaring, at least for this reviewer. We got a really good tie-in to the main story of the Joker War. Now some may say, “Well in Batman, Bruce is all delusional from Punchline’s toxin, in the Monarch Theater with the undead bodies, etc.” This is all true. However, it’s not needed to establish a true tie-in to the main story. Tomasi does a good job here in acknowledging several key points from the main story of Joker War:

This was great to see from Tomasi, leaving the only minor question for me is at what point of the War is this? (Memo to self, it might be a good story idea – putting the issues in chronological order.) I would wonder if it might be a turning point considering Bruce and Kate’s arrival under sub-level 3 of Wayne Enterprises, the use of the Bat-tank, the destruction of the 3D printers, and the eventual rescue of Lucius.

We also see the return of Batwoman to Detective Comics. I think using her here is a great move from Tomasi considering what I feel was an unpleasant send-off she received at the end of Tynion’s Tec run. It’s clear that things still aren’t kosher between Kate and her cousin, but she’s still a Bat looking over the streets of Gotham. It was truly enjoyable seeing the cousins interact with each other again. Despite the fact that the family still has wounds to heal, it’s evident that Batman still trusts and respects his cousin. Great touch from Tomasi.

I didn’t realize Kenneth Rocafort was slated for the art in this issue until I actually started reading (he’s also doing issue #1026 a well). His style always reminds me of Frank Quitely. The art wasn’t bad at all. I enjoyed it (especially on a second read). However, I’ve gotten used to Brad Walker et al on Detective and would have loved to have seen Walker’s storytelling of this arc. But Walker will be back for sure.

We now see what comes next as we’re promised one more Joker War tie-in, an issue involving Killer Croc, before the landmark issue #1027.

Final thoughts: This was a well-written story from Tomasi and Rocafort. We also get an issue of Detective Comics that ties in with the main Batman book, something I and others have asked to see for quite a while. I hope that this continues through the remainder of the Joker War and beyond.