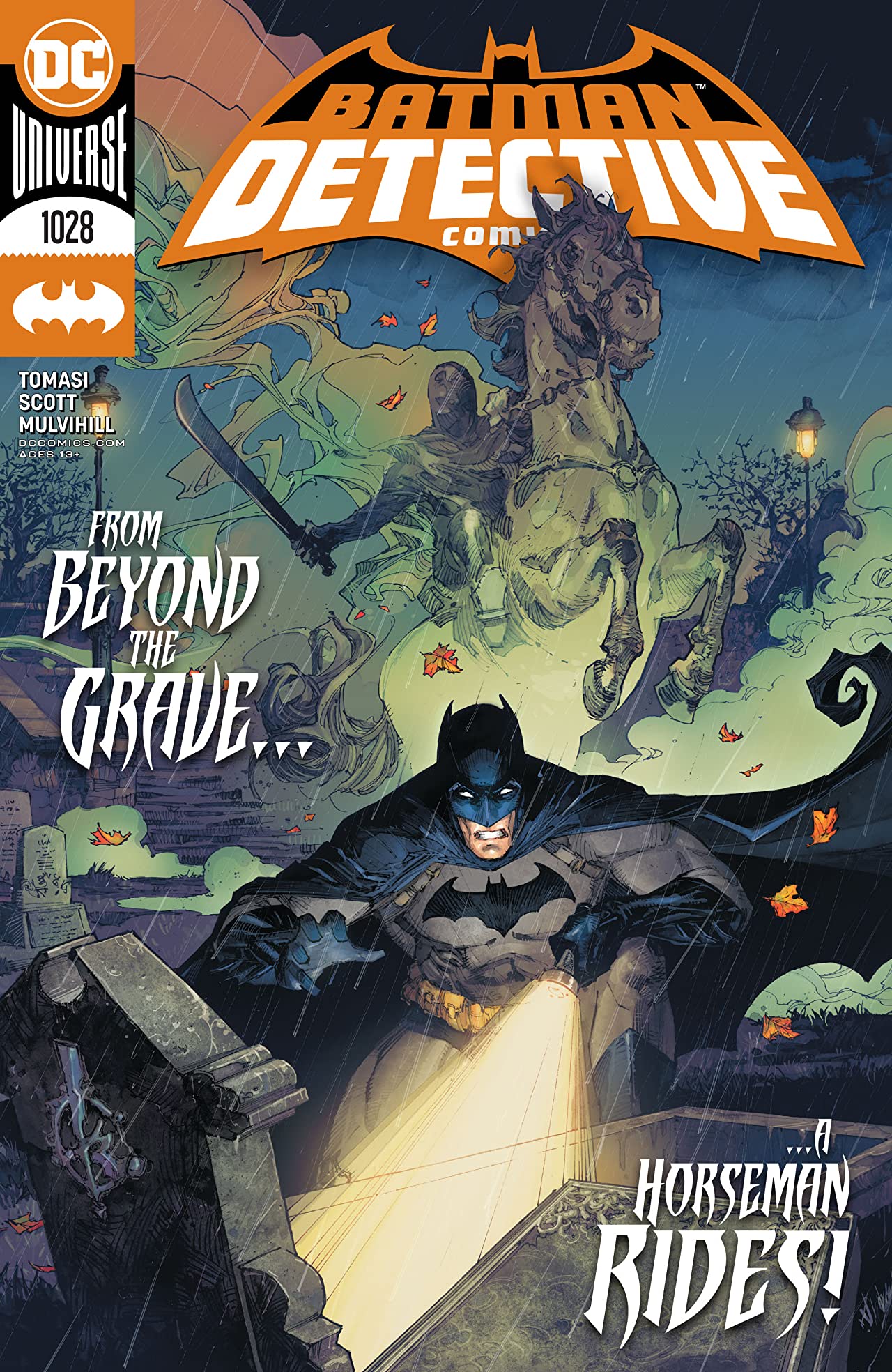 Overview: Batman hunts a horseback murderer as political winds are changing in Gotham.

Synopsis (spoilers ahead): A mysterious horseman kills a detective, and Bruce Wayne muses at the funeral about the detective’s long history of corruption. He also notices the presence of Officer Nakano (from Detective Comics #1027). That night, Batman uses new x-ray tech to look at the corrupt detective’s body, noticing that the detective was beheaded after being disarmed by a gunshot.

A corrupt judge is murdered and beheaded, and Batman clashes with Commissioner Bullock (back in action after quitting in Batman #100) over Batman interfering.

The horseman beheads a third victim on a motorcycle, and a fourth man receives a call telling him of the murders and ordering him to meet at the stables.

At the stables, the murderer reveals himself as Steven Holman, son of Jake Holman, who was murdered by a conspiracy of the four. Batman steps in, stopping Steven from his fourth murder, and then chases the man in a fierce horse race, capturing him with his bat-grapnel.

Batman gives the evidence of the conspiracy to the Gotham Times. Later, Bruce hears Officer Nanako declare his candidacy for mayor on an anti-mask platform.

Analysis: Tomasi’s run on Detective Comics continues with a solid, if somewhat unremarkable one-shot detective story with a creepy October twist. Blending elements of the Legend of Sleepy Hollow and the conspiracy revealed mystery plot, Batman faces the new Gotham, very similar to the old. Though cleverly connected to Mariko Tamaki’s story from Detective Comics #1027, this story doesn’t really show the impact that the Joker War had beyond a bit of civilian resentment against Batman, which fits into many other eras. The most intriguing part of the story is Officer Nanako’s mayoral bid – though as a uniformed police officer, I’m very intrigued to find out where his funding is coming from.

Though she did pencil the Batman Universe title Birds of Prey a long time ago, Nicola Scott feels more like a Metropolis or Themyscira artist, with bright colors and cheerful faces. And indeed, much of this book does have a daytime setting, though the nighttime chases and murders are appropriately grim. It’s appropriate that her replacement artist on Wonder Woman, Bilquis Evely, will be penciling issues in Peter Tomasi’s run soon.

Kenneth Rocafort’s main cover presents a fairly generic rendering of a Batman peering into a coffin as a sinister, sword-wielding horseman threatens from behind. Lee Bermejo’s variant cover gives us Batman in the Superman Landing pose, fist on the ground, with his typically gorgeous rendering – though it clearly has nothing to do with the story inside, like many variant covers.