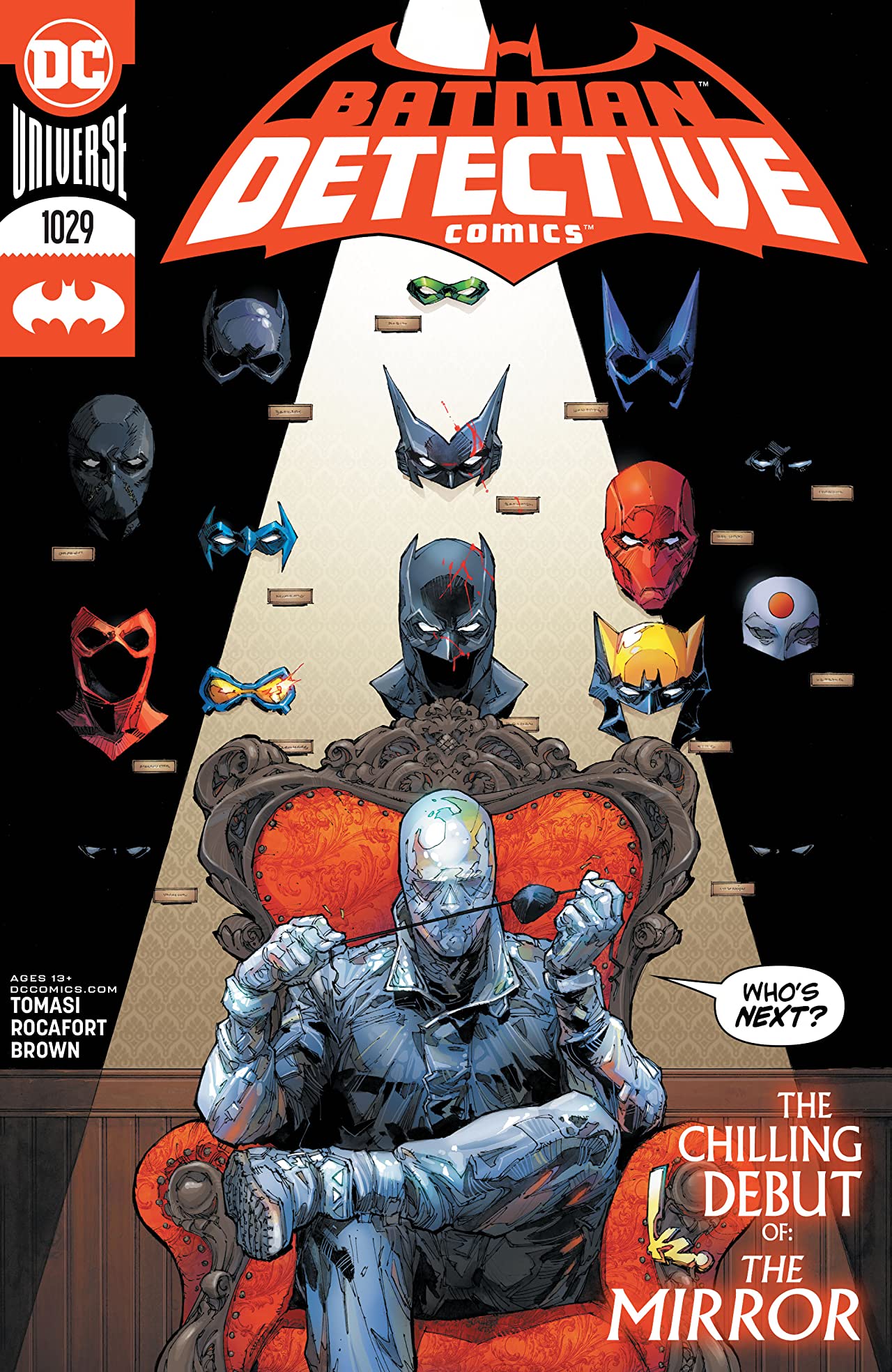 Overview: As Batman continues to get adjusted to life post-Joker War, a new player in Gotham goes out of his way to increase the growing anti-vigilante movement with the ultimate goal of unmasking the Bat-Family.

Synopsis (spoilers ahead): A mysterious figure in a reflective helmet is speaking to a small group of citizens. In post-Joker War Gotham, the figure named the Mirror appeals to the emotions of the citizens in attendance as to the cause of what’s wrong in Gotham. He doesn’t dismiss the role of Gotham’s rogues in their contribution to Gotham’s misery, but he also presents the argument that places blame at the feet of masked vigilantes, specifically the Bat-Family. To make things right for Gotham City, the Mirror presses to the crowd that the Family’s identities must be brought to light.

At Wayne Manor, Bruce continues to pack boxes as he prepares to move away from the Manor and into the city (as seen in Batman #101, the end of the Joker War arc). As he is carrying boxes, he passes Alfred’s old room. After looking over some photos sitting out and reminiscing over past memories with his adopted father, he decides that Alfred’s room will be the last one that Bruce packs up.

Later, Batman is giving chase to some robbers who have taken a hostage. As they race through the Gotham streets, someone shoots a rod at the Bat-Cycle, taking out the front wheel. The felons think they’ve gotten away, but Batman has latched onto the getaway vehicle with a grapnel gun. After pulling himself in, he disposes of the driver before taking the wheel himself. After taking out the other two robbers, Batman stops in front of a GCPD station. A crowd gathers and begins to demand that Batman unmasks as he takes off into the Gotham skies. Little does he know that the Mirror is watching from a distance.

Later, aboard a private yacht docked in Gotham Harbor, Bruce Wayne appears at a fundraiser for the Nakano for Mayor campaign. He wants to gauge just how much momentum the anti-vigilante sentiment is gaining throughout the city. As the former officer gives his pitch to the members of the 1% that have gathered, would-be robbers seize the boat and set it out on the water with the intention of funding their own campaign. Unbeknown to them, Bruce has signaled for help. Before that help can arrive, however, Nakano attempts to play hero himself, causing Bruce to take some action of his own to keep the mayoral candidate alive. Eventually, the cavalry, in the form of Nightwing, arrives and quickly takes out the remaining felons. The would-be mayor is ungrateful, blaming Nightwing and others for the cost of his turmoil. Nightwing leaves in disgust.

Back at the Batcave, Bruce is going over the events of the evening. He quickly realizes that someone has been in the Cave. His black casebook has also been taken and replaced with a blank copy. Other than Alfred, only one other person with access to the Batcave who would know about Batman’s black casebook and it’s location is the blood heir – DAMIAN!!!

Analysis: I am going to discount the story we got in issue Detective Comics #1028. Despite the few mentions of Joker War, it felt more like a one-off than anything. This issue, however, is something that I have been looking for in Detective and all of the Bat-Books – uniformity. We find out in Batman #101 that Bruce is leaving the Manor to move into the city. In Tec, he’s packing his things. This is something I believe Bat-Fans all over have been asking for, and I am glad we are finally getting it not only in the two main titles, but in the other Bat-Books as well. While everything doesn’t add up exactly, simple mentions such as this make the stories much more meaningful, enjoyable and should drive readers to pick up the other titles, not including those that have been canceled.

There is a lot to peel apart with this issue, beginning with the appearance of the Mirror. Who is he and does he have ties to anyone, perhaps to the mayoral hopeful, Nakano? If not, is there any chance of the two crossing paths? What will that reaction be? Right now, I have some problems with the character’s development. While Tomasi’s explanation for the new character makes sense (“I’m not hiding who I am. I am showing everyone who they really are.”), it is pretty weak. Tomasi might have been better not including this at all.

In the end, I ultimately think (actually, I’m hoping) that the Mirror will be a minor plot point in a much bigger story. It is my hope that the reveal at the end of the issue – the return of Damian Wayne – is the main story. Over the last few years, we have seen the beloved character (if you disagree with this, we can meet in the schoolyard when the bell rings) written quite poorly by creators with the exception of one – Peter Tomasi. Going all the way back to his run on Batman and Robin, Tomasi has held this ability to greatly improve Damian’s characterization. In the end, I hope Tomasi’s story is as much about Damian’s redemption as it is anything else and fans are treated to his return as Robin. I have full confidence in Tomasi’s ability to do so.

I will admit, that while Rocafort’s art is ok and there’s nothing really wrong with it, of the current rotation of artists on Detective Comics, his is my least favorite. Perhaps it is because I have truly enjoyed Brad Walker’s and Doug Mahnke’s work that much more. It is, however, enjoyable.

Final Thoughts: After an off issue with Detective Comics #1028, Tomasi has corrected the course in providing a decent story that provides a mixture of emotion and action. I am looking forward (and praying) that by the time all is said and done, Tomasi does what he does best and fixes all the harm done to Damian’s character. Bring Robin home.