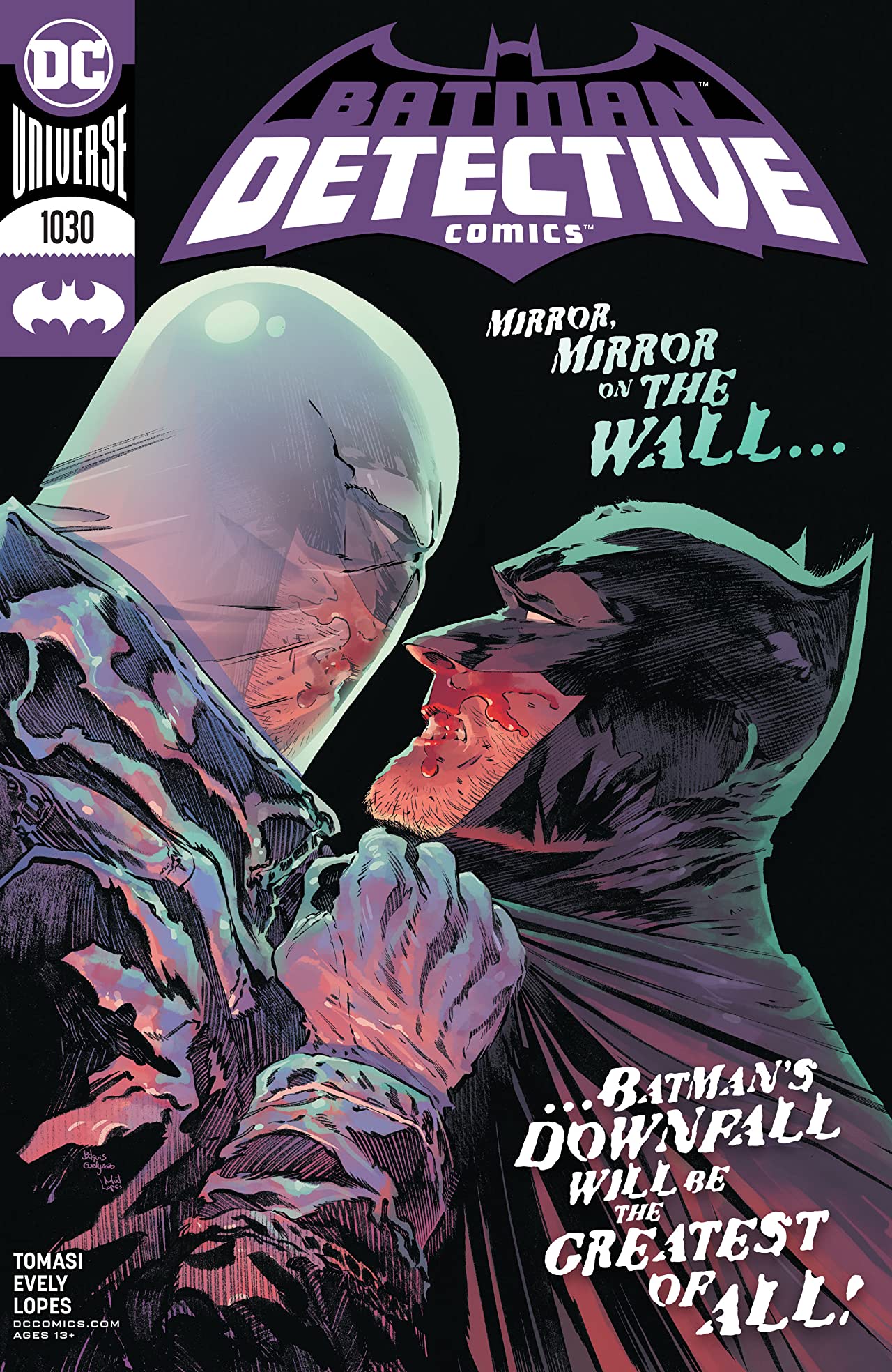 Overview: As Bruce prepares to search for the whereabouts of Damian, he’s called to an impromptu meeting with the family. What could it be about?

Synopsis (spoilers ahead): Chris Nakano is awakened by another nightmare. He relives the events that took his eye and the life of his partner (as seen in Detective Comics #1027). Nakano’s wife questions whether Chris should reconsider his bid to run for mayor of Gotham, but Chris is committed to the race – not just for the future of the Nakanos’ unborn child, but also for the souls of the citizens of Gotham City.

As he travel through the Gotham skies, Batman thinks over the recent events involving his son who relinquished the role of Robin (as seen in Teen Titans Annual #2). Now, Batman is searching for him, not only because Damian stole his black casebook (as seen in Detective Comics #1029), but also because he feels that his son is reaching out for help. Batman questions what he can do to improve himself as a father. However, before he can deal with Damian, he has a meeting to attend…

Batman lands on a rooftop where Nightwing, Batgirl, Red Hood, Batwoman, Orphan, and the Signal await him. They each speak on recent incidents in which they’ve been specifically targeted by the anti-Bat movement that has been gaining momentum throughout Gotham. The family is concerned with being targeted while its members are trying to protect the city. Despite their good deeds, nothing is working with the rhetoric coming from the wannabe mayor. Before departing, Batman tells the family of Damian’s departure from the Teen Titans and asks that they let him know if they make contact with the young Wayne. Duke thanks Batman for gathering the family together. Batman claims that he didn’t call the meeting, thinking Nightwing did. Confused, the family goes quiet before Cass notices a mob forming on the streets below screaming “No more Bats!!!” The door to the roof bursts open, and a crowd, led by the Mirror, charges at them. Batman and the rest of the family scatter.

Inside the GCPD’s cold case file room, Damian looks over some of his father’s entries, in particular those involving the near-death experiences of a young Bruce Wayne. Damian begins digging through some of the police files before quickly discovering a pattern in the various folders – an officer whose name appears in each report. Cockily, Damian goes in search of Detective Catherine Podolsky.

Analysis: This could have been a great issue, but there are several things that just don’t sit well with me. Let me discuss those things first.

Two things completely turned me off to the issue. First was the art. As I mentioned with previous reviews looking at the art of Kenneth Rocafort, I am not a fan. The same applies to the art from Bilquis Evely and colors from Mat Lopes. It just doesn’t do it for me. In recent reviews, I have claimed my bias for both Doug Mahnke and Brad Walker who kicked off Tomasi’s run on Detective Comics. The more I think about it, I believe it’s more than just a bias. It unfortunately isn’t a style I’m a fan of. The hues of the colors and the depiction of the characters all look off to this old reader.

Second, and this might be worse than my thoughts on the art, is Tomasi’s depiction of the Bat-Family. While it was great seeing the family together, are they truly not that smart (particularly Bruce and Babs), that they could not develop a secured communications system and get duped into a set-up? Then, when confronted on the rooftop, they scatter like scared roaches. It’s just bad that Tomasi used this flawed plot depiction of the family to move his anti-vigilante story along. There are plenty other ways that this could have been done. This seemed like a cop-out. Also, if you’re going to gather up the family, including Duke Thomas, but not Steph, and especially Tim Drake, there’s something wrong (no offense to the few Duke Thomas fans out there).

All is not bad with this issue, however. Despite the Mirror being a weak character, there might be some promise in the Nakano story if done correctly. I’m thinking the former officer might experience some more trauma that will make him an even bigger problem to Batman than the Mirror and his antics. However, I would be quite disappointed if he and the Mirror are one and the same (right now, I don’t think they are).

As hoped, Tomasi is moving the Damian story along at a decent pace. Seeing him alone for a while before coming face-to-face with Bruce is a nice build-up that should lead to some redemption to the character. I did find myself confused, however, seeing events of young Bruce as entries in the casebook. The contents of Batman’s casebook has its own history in Batman lore. It seems Tomasi is expanding on that to bring his story with Damian along. Let’s see where it goes as Damian tracks down the Gotham detective.

One final thing… It also seems DC is continuing its trend of having covers that have zero ties to the actual story we’re reading. “…Batman’s Downfall Will Be The Greatest of All!” What?

Final Thoughts: Even with some pretty unforgivable missteps, I am still interested in seeing where things go with Tomasi’s story, particularly as it pertains to Damian Wayne. For me, the art has to get better. It’s workflow just does not work for me at this time. This Tec fan prefers either Brad Walker or Doug Mahnke (Walker returns for issue #1032).