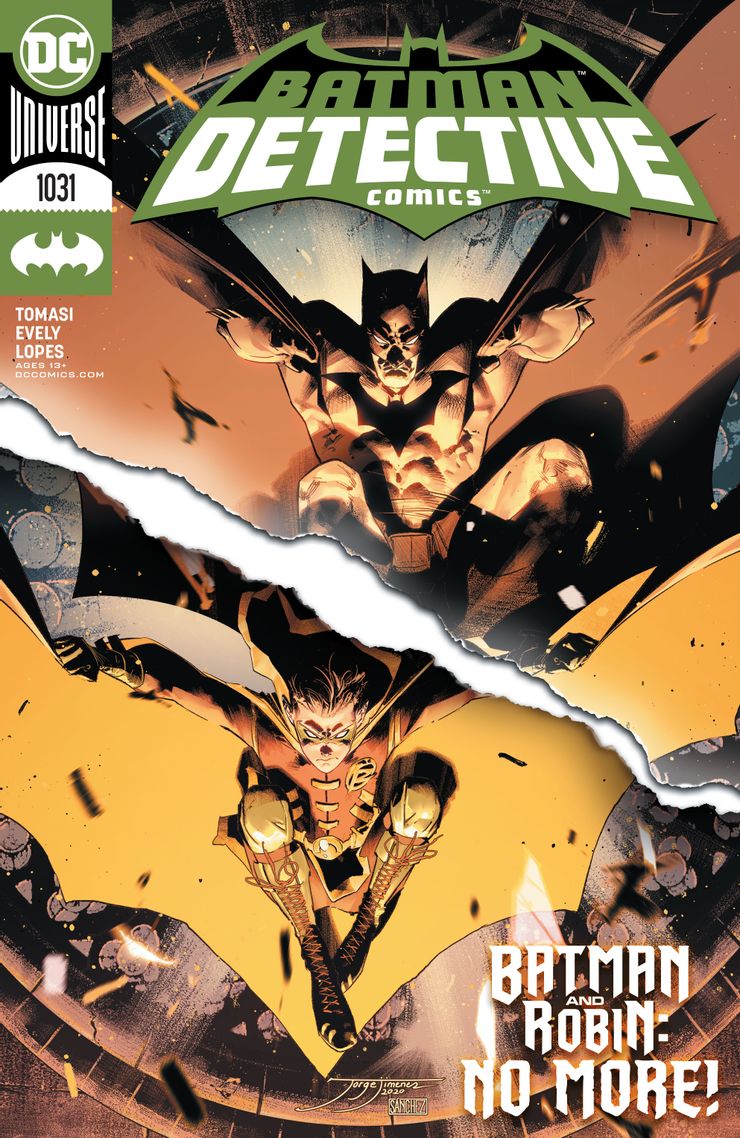 Overview: As he continues to determine the whereabouts of his son, Batman enlists the help of the Bat-Family in quelling the building anti-mask movement that continues to grow across Gotham City.

Synopsis (spoilers ahead): It’s been a long night at the Nakano campaign headquarters and the mayoral candidate has about another hour of work before he can head home. He’s not the only one in his office, however. The Mirror steps out of the shadows and introduces himself. He comes bearing gifts that guarantees Nakano wins the election, placing a flash drive on his desk. The former police officer wants no part of it, nor does he want to attend the event the Mirror has planned with plenty of his followers. Nakano sees his guest as just another mask contribution to the problems going on in Gotham. He sends the disappointed Mirror away along with his flash drive.

In another part of Gotham, a young teenager is tagging a building with the Bat symbol to show his support for Gotham’s masked vigilantes. As he leaves, another comes behind him and defaces it in disagreement. As the two begin to fight, Batman breaks them up. After sending them both to their respective homes, he signals to the rest of the Bat-Family to stay vigilant as he feels that something is about to go down in the city. He heads off to continue his search for Damian.

Detective Catherine Podolsky has just made it home from work. As she pours herself a glass of wine, she calls for her feline, Cleo, who doesn’t respond. As she walks into her study, she finds Cleo sitting in the lap of Damian Wayne, who begins questioning her about the events early in her career involving his father. He also reveals that he knows her true identity – Catherine Elliot – the half-sister of Tommy Elliot, as known as Hush. Damian demands that the disgraced cop turn herself in to the police. She refuses and pulls a gun on Damian and yet is quickly disarmed by the former trained assassin. Damian ties Podolsky up, letting her know that the cops are on the way and that all the evidence he gathered has also been sent to the media. Damian leaves with Cleo in hand.

A crowd of anti-vigilante followers are starting to gather and head towards Janson Riverfront Park. The Mirror appears with the crowd gathering at Aparo Square. He calls his followers to arms in the mission of removing the masks from all within Gotham, good or bad, even if it means resorting to violence to do so. The crowd continues heading towards Janson Park, where they are met by a group of Bat supporters wearing masks of their favorite hero. They each argue their points before the Mirror punches “Batman.” A brawl breaks out amongst the attendees. The Family swoops in from their perches to break up the carnage, leading Batman to confront the Mirror face to face.

As Batman and the Mirror battle it out, a mysterious figure in a paper Batman mask shoots the other Family members with tranquilizer darts, incapacitating them. Batman eventually gets the best of the Mirror, who in turn, heads to the rail overlooking the Gotham River. Batman attempts to talk him down, but the Mirror sees himself as more than a figure, but as a martyr. He dives over the rail and as his body falls towards the water, a bomb explodes.

The crowd confronts Batman, accusing him of forcing the Mirror to jump. Batman responds with a passionate speech about the events that created him and the Bat-Family and why they do what they do for Gotham City. As he pleads for the crowd to return home, Nightwing comes over comms and tells Batman they will disperse the crowd; he needs to go find Damian. Little does Batman know that Nightwing is in distress. Hush has a gun to Batgirl’s head. As Batman leaves the scene, Hush takes out Nightwing with a tranquilizer and he falls next to the remainder of the unconscious Bat-Family.

Analysis: There is so much to like about this issue, but unfortunately Tomasi has once again supplied readers with plenty to be disgusted with. Specifically, Tomasi’s handling of the Bat-Family is disappointing at a minimum; downright terrible at worse. In issue #1030, we were presented with a Family who seemed cowardly as they scattered like roaches when confronted by the anti-vigilante crowd. In this issue, we see the Family seemingly incapable of realizing (at least until the last moment when apparently Batwoman sees the plan playing out) when they’re being set up, just as they were with issue #1031. And now they’ve all been taken out by Hush… HUSH!!!

Hush now serves as another non-A-list rogue that Tomasi is tackling since he began his run on Tec. Unfortunately, it doesn’t seem like this arc will lead to a similar ending with some type of redemption. I actually wasn’t aware he had returned from his inter-dimensional battle with Nightwing during the “Prelude to a Wedding” mini, but apparently, he did during the City of Bane arc. The point is, Hush is not that interesting of a character for me to care about. We’ll just have to see where things end up.

While still not a fan of Bilquis Evely’s art, I will say that it was quite better this issue than in the last. It’s just not appealing to me. Special shout-out, however, does go to Jorge Jimenez and Alejandro Sanchez for their work on the main cover, as well as Lee Bermejo for the variant. Those were some great pieces of work.

Despite some very real concerns, there are still some pretty good seeds Tomasi is planting this issue. One is the further development of Nakano. In previous reviews, I stated my concerns with the idea that he and the Mirror were linked together beyond just the fact that they both hate the masks within Gotham. We see in this issue that this is where those similarities end. Nakano is his own man and is one of integrity, at least for now (there’s more to learn about the former Gotham officer in DC Nation Present DC Future State, also released this week).

I’m also happy to see that the Mirror is gone, at least for now. I do expect him to return in some fashion later on. But it would be a very cheap move to remove him from the chessboard in this manner. For now, however, I’m quite pleased that he is off the board for now.

The best for me, however, is the continued adventures of Damian as he goes on the trek to redeem himself. At this point, Tomasi’s writing of this character is the best of the arc and I remain excited to see how it ends.

Final Thoughts: Clearly this issue was much better than issue #1030. However, I am still having major concerns with how Tomasi is depicting the Bat-Family in this arc. It is not good, and I hope is corrected by the time the arc ends. I am pleased to see, however, how Nakano is being developed and am loving the solo adventures of Damian.