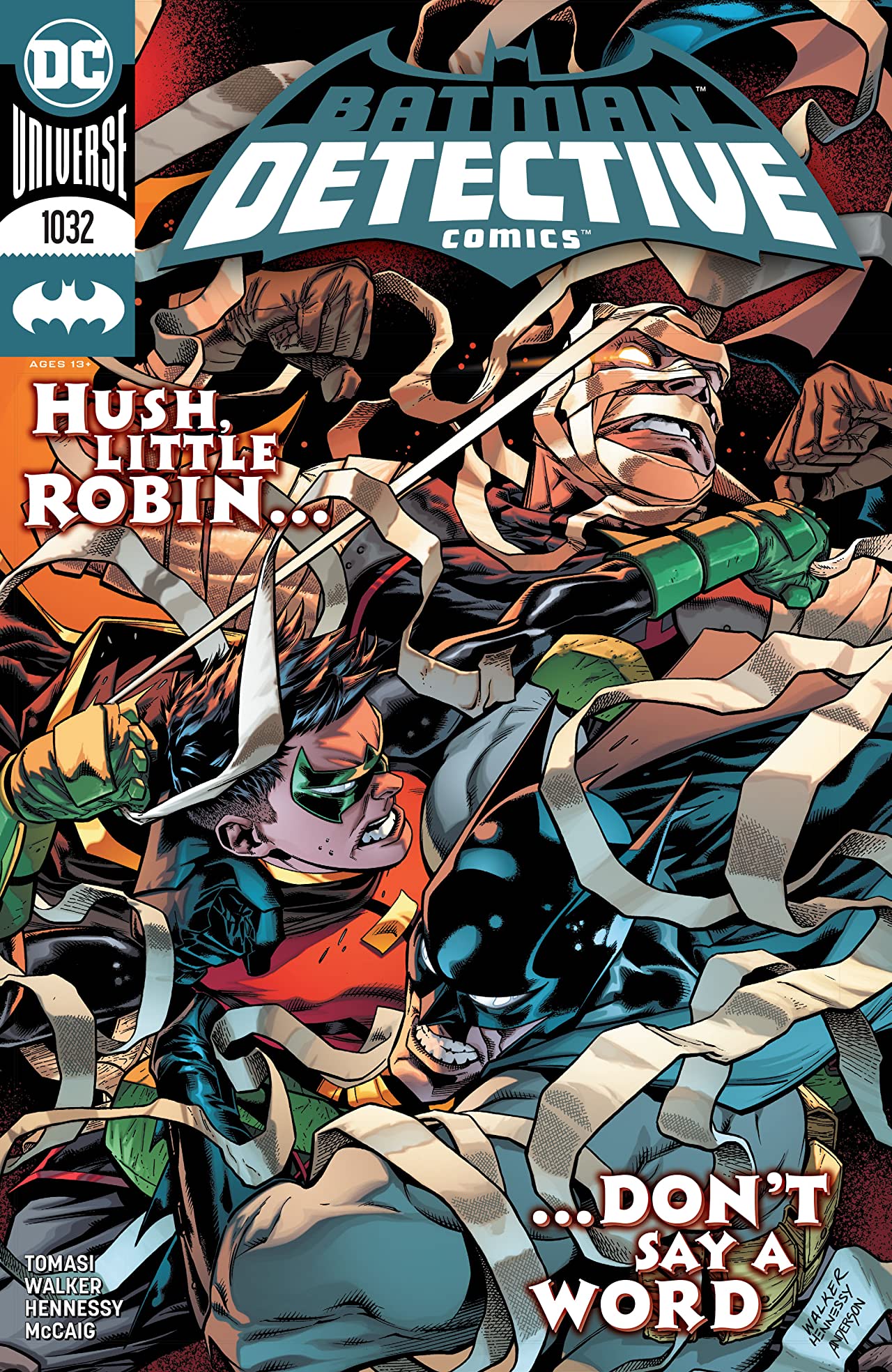 Overview: Batman closes in on the location of Damian as Hush moves forward to executing his plan on the captured Bat-Family.

Synopsis (spoilers ahead): Somewhere in Gotham, Hush is having a conversation with the captured Bat-Family as they all begin to stir from unconsciousness after the events of Detective Comics #1031. As they begin to attempt to speak, Hush tells them that he has paralyzed their vocal cords, taking his moniker to heart.

Hush begins to reveal his plan to the silent family members. While Batman is distracted with the anti-vigilante movement throughout Gotham, Hush wanted to move in to take the family down. As he begins to draw blood from Red Hood, Hush reveals that he will harvest their organs.

In the skies above Gotham, Batman continues his search for Damian Wayne and has finally identified the location of Damian’s hideout. As Batman drops down to the location of the old Gotham World’s Fair, he begins to calculate the contingencies and booby traps his son has laid out for trespassers. Once inside, Bruce looks in appreciation at his son’s base of operation. As he picks up his casebook, Damian pounces and attacks. Refusing to strike back, Batman urges his son to stop and to talk to him. As the two Waynes fall out of a window onto another platform, Batman gets the upper hand, leading to Damian yielding – for now.

The next morning, Christopher Nakano’s wife is egging him on to attend his long-rescheduled appointment to receive his new prosthetic eye. Nakano is having second thoughts about the new eye but proceeds with the procedure. As the doctor finishes the insertion and gives Nakano tips on keeping the prosthetic in shape, he informs Nakano that the prosthetic was upgraded with a donation from Bruce Wayne. This infuriates Nakano, who demands the doctor to remove the prosthetic. He does not want to be bought by the rich if he becomes mayor. Nakano slams the eye against the wall, shattering it into pieces and leaves with his wife.

Later that evening, Hush is speaking to someone on the phone about the result of some lab tests. The results, unfortunately for Red Hood, are promising, leading him to be the first that Hush will harvest organs from. Hush gloats over the idea of taking out the Bat-Family all the while making millions while doing it. He knocks Jason out using chloroform. While this is happening, Batman and Damian are swinging through the Gotham night light. They’re in search of the missing members of the Bat-Family, who Batman realized were missing after receiving no response from them the night before. After squeezing some of the Gotham underworld, they feel they have identified the location of Hush’s hideout. They dive in to make their move.

Analysis: This issue was a breath of fresh air compared to the first two issues of the arc for various reasons. Simply put, this was just a better issue to read. Perhaps I say this as a bonafide mark for Batman and Robin (he’s still Robin to me) teaming up once again. If you look at the interaction between Bruce and Damian in this issue, you see one of pure greatness that has followed Tomasi as of late – his ability to write and delve into familial relationships. It takes center stage here as soon as Batman lands inside of Damian’s hideout, and it continues throughout the issue. Tomasi’s strength in writing family is also seen in the interaction between Nakano and his wife as Nakano struggled with the idea of having a prosthetic eye.

Side note: isn’t it ironic that the anti-mask, anti-vigilante mayoral candidate finds comfort in his eye patch that he sees as a mask? I’m just saying…

If you’ve listened to the last few episodes of the TBU Comic Podcast, you would know that all of us on the cast feel that Damian’s story has been the strongest of the arc and have had issues with how Tomasi has depicted the Bat-Family. I still have concerns with this, but Bruce and Damian’s story clearly overshadows this. In fact, Nakano’s story overshadows this as well. Considering what has been revealed about the upcoming Future State stories, we seem to know how the mayoral election is going to end. It will be interesting, however, considering Nakano’s behavior this issue. We see some naïveté in the mayoral candidate. He doesn’t want to be bought by the rich, but he was happy to take money from them at the fundraiser in the first issue of the story arc. Over the next few months, we’ll see how time changes him if any. The point being, when the Bat-Family is the weakest part of the story arc, that tells you something. Hopefully, Tomasi corrects this next issue.

The story as a whole had hints of Paul Dini’s Heart of Hush (see Detective Comics #846-850) in it, where Hush is looking to harvest the organs of the Bat-Family, specifically Catwoman. This is a nice callback by Tomasi, and it will be interesting to see how he brings the arc to a close.

Welcome back, Brad Walker and team. It was great to see the team of Brad Walker and Andrew Hennesy back on the title again (even if it’s short-lived). While Brad Anderson was missing from the issue, Dave McCraig didn’t miss a beat in filling in on colors. This art team has been my favorite during Tomasi’s run on Detective Comics.

Final Thoughts: I had a different “final thought” typed up before this weekend’s news that Tomasi will be dropping off of the title after the next issue. As a big fan of his, I am sad to see him go. Here’s to him and Brad Walker going out with a bang in issue #1033. I also hope his departure leads to better things, specifically a new Batman title (hint: it includes his son). Make it happen, DC.