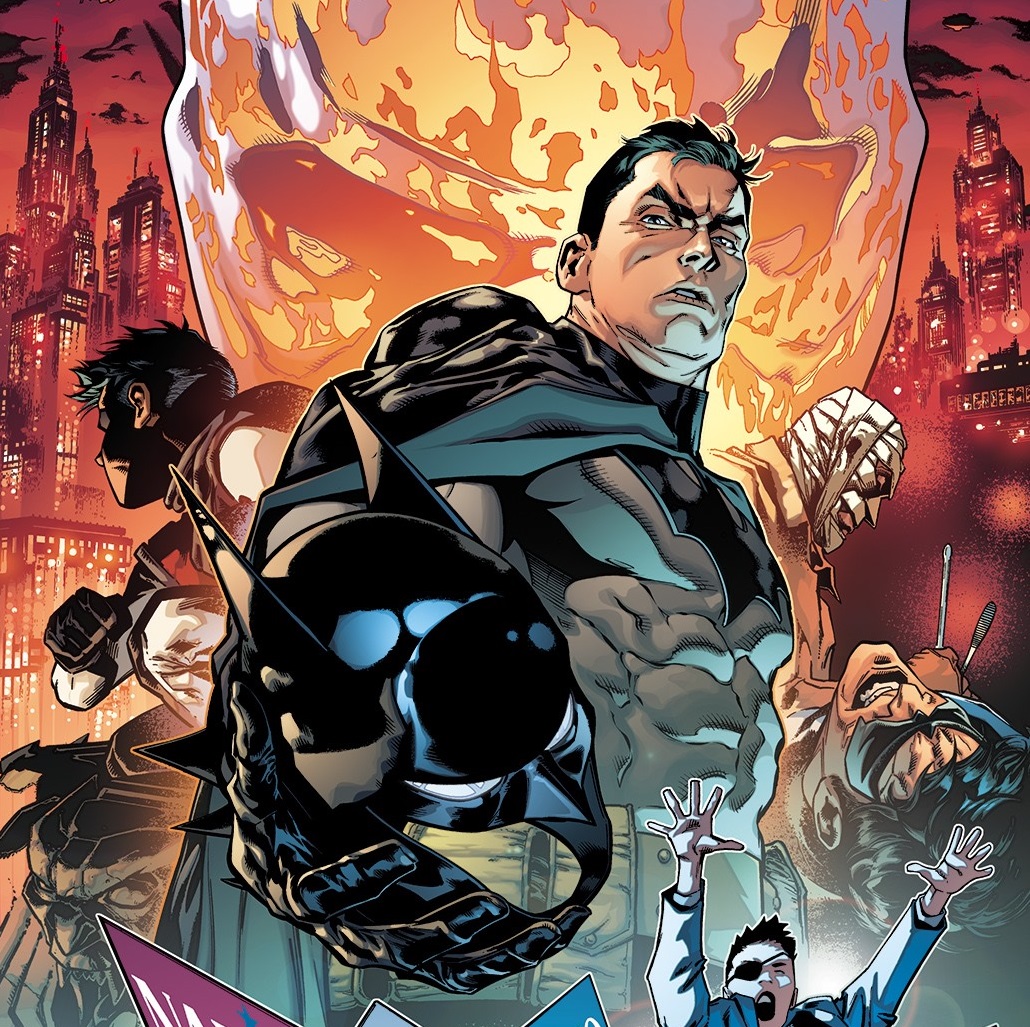 Overview: Batman and Hush come to final blows as the final votes are counted in Gotham’s mayoral election.

Synopsis (spoilers ahead): As Batman and Damian dives in their final descent into Hush’s hideout, an old theater, Bruce reminisces on the ups and downs of his past adventures with his son. As they crash through the ceiling, he takes fond appreciation in knowing that Batman and Robin are together once again.

The Dynamic Duo arrives just in time to prevent Hush from cutting into Jason, who still lies unconscious on a gurney (see Detective Comics #1032). Hush begins firing his weapons at them, happy that Bruce has brought his son for him to kill in front of him. As Batman heads towards his former childhood friend, he instructs Damian to save the rest of the Bat-Family, who are all still bound and unconscious.

Hush gains the upper hand on Batman, applying pressure to one of Bruce’s nerves. As numbness sets in, Damian intercedes, attacking Hush with a handful of scalpels. The distraction is enough to allow Batman to regain his composure. He throws a handful of Batarangs, pinning Damian to a wall. Batman wants Hush all to himself. He charges Hush, knocking him from a theater balcony.

The two old friends land on the floor below. As they prepare to battle – Batman removing his cape and gauntlets, Hush, his gloves – Elliot teases Batman on the loss of the Wayne fortune, something he could not experience for years until after his mother’s death allowed him to inherit his. As they battle, Bruce thinks back on their lives growing up and the events that would make them lifelong enemies. Batman gets the upper hand and with one right hook, takes out Hush, who falls to the ground.

As Batman ties up the now-unconscious Hush, he is congratulated by Damian for a job well done. Batman wants to continue the conversation he began with his son, but Damian is unexpectantly gone. Bruce finds him preparing to leave on the theater rooftop. Damian still intends on solving the cases in Batman’s case book and getting out from under the shadow of his father. Bruce attempts to reason with his son, but the young Wayne is impatient and wants none of it, especially after the death of Alfred. Despite Batman’s words, Damian blames himself for Alfred’s death. Batman offers Damian the Robin mantle, but Damian rejects it, leaving his father alone on the rooftop.

At Nakano campaign headquarters, the final votes are coming in. In one of the closest elections in Gotham history, Christopher Nakano has been elected mayor. He addresses a crowd of waiting supporters and reporters looking to know what’s to come for the incoming administration. As the Nakanos are rushed off, the mayor-elect wonders what he is to do next now that he has actually won.

Bruce returns to Wayne Manor and after showering from the night’s events, finishes packing things, including the items in Alfred’s room. He gathers Ace and Damian’s pets – including Battlin’ Bovine – and after saying one last good-bye to his adopted father, heads of to his new home in Gotham – and to new memories.

Analysis: What a way to end a run. When Peter Tomasi began his run on Detective Comics, I had high hopes of where he could bring it. While we did get a few arcs that were decent, it is safe to say that this run will not be memorable. While I am certain that Tomasi was caught under the influence and pressure from DC editorial, this just didn’t seem like the same creator we loved in Batman & Robin and Super Sons.

This final arc for the team of Tomasi and Walker is another example of what could have been. While the first three issues of the arc are quite forgettable in creating a character no one cared about (and quickly killing off that character) and depicting the Bat-Family as a bunch of klutzes who were able to be tricked and taken out by B-level (at best) villain, this final issue from Tomasi gave fans a small view of what could have been – Batman and Robin back together again. Bruce’s attempt to reach his son and Damian’s response to that outreach is what I was hoping to see in the pages of Tec since Damian had his first appearance during the Arkham Knight run. It’s unfortunate that we won’t get to see Tomasi’s plan for Bruce and Damian moving forward – at least in the pages of Detective.

In the end, it seems that Nakano was simply a plot device to set up his role in the Batman-related Future State titles beginning next month. In the end, his development fell flat. Hopefully, the new mayor will have a better place in the pages of Future State in January and February.

What will be greatly missed is the artwork from Brad Walker. Since seceding Doug Mahnke as the series artist, Walker and the rest of the artistic team has been the best thing going on the title. In this final issue, you get to see more what made him a favorite of mine. I became a big fan of Walker during his time and look forward to seeing what the future holds for him.

I can only hope that this final issue is a sign we’ll get more of Damian in the future as he travels the road to redemption (Joshua Williamson will have a two-part back-up story in the pages of Batman and Detective Comics in March). It will be tough not to see Tomasi and the team on Tec as I had such high hopes for the run. However, I look forward to the new direction with Mariko Tamaki.