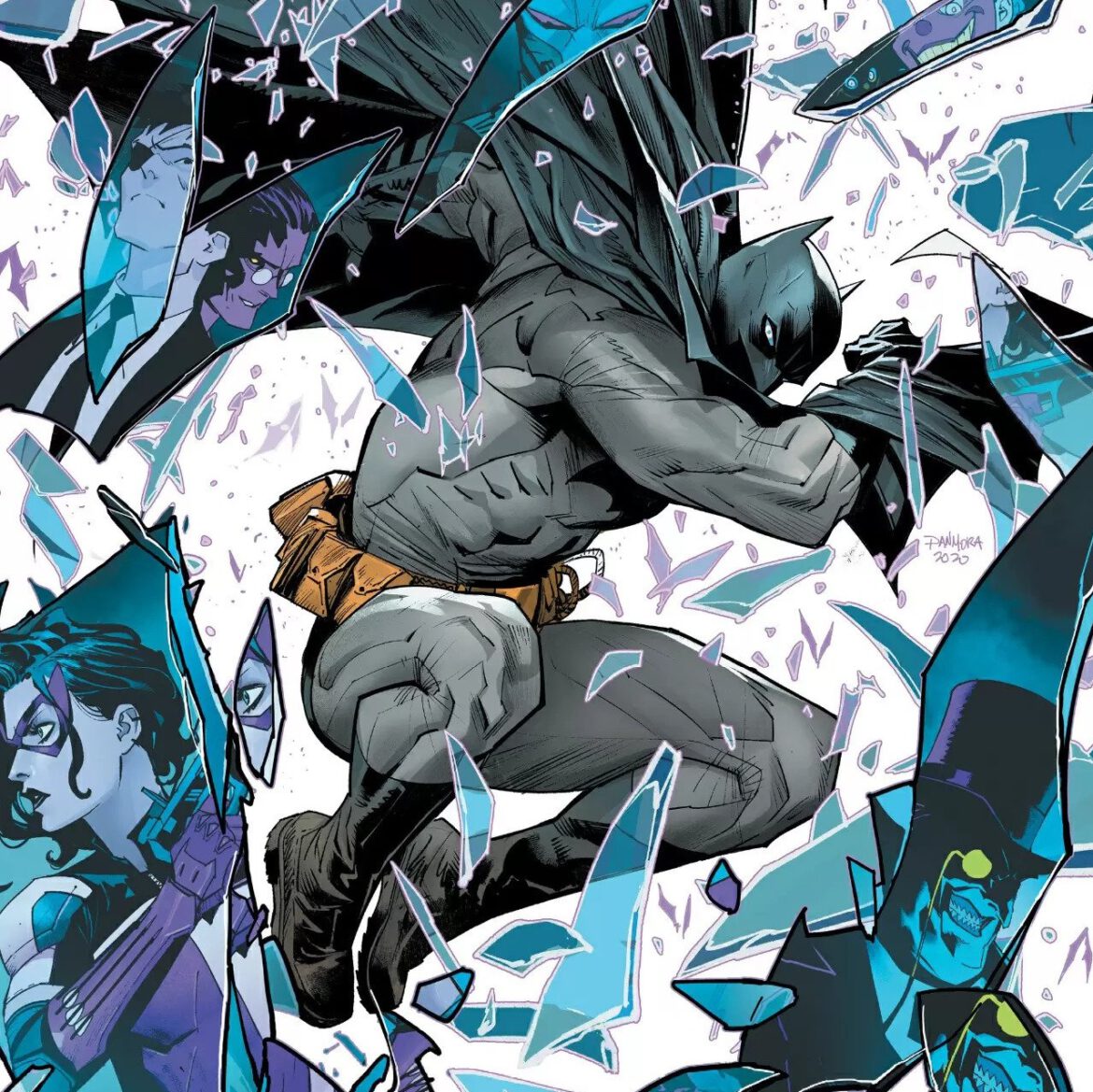 Overview: A new era begins in Detective Comics #1034 as Mariko Tamaki takes the reigns and teams with Dan Mora after a hiatus for the events of DC Future State.

Synopsis: In the City Hall district of Gotham City, Mayor Nakano is hosting a fundraiser, selling his idea of a new Gotham City to the elite of Gotham, including “millionaire” Bruce Wayne. Suddenly, the party is crashed by the Party Crashers, donning Jokerized masks. As security rushes the mayor off, Bruce springs into action. Returning as Batman, he quickly dispatches the crashers, wondering why they’re out of their comfort zone attempting heists on the wealthy and stealing their cell phones instead of wallets. Now secured, Nakano is not pleased to hear that Batman secured the area before GCPD could arrive.

After disposing of the Party Crashers, Bruce heads below the Gotham sewers, where he continues to build his system of mini caves under the city to replace the cave under Wayne Manor. As he heads home, he’s stopped by Lydia Warren, one of his neighbors who asks him about the events of the night before at the fundraiser. She mentions another neighbor, Neil, who works for the mayor, was also there and saw the turmoil. She invites Bruce to a neighborhood party. Bruce resists, but Bruce’s fellow resident insists, promising that the rest of their neighbors are nice people. Bruce yields and promises to bring a treat to the gathering.

At the gathering, Bruce, carrying a bottle of high-quality scotch, meets his new elite neighbors, all of who he is already familiar with. Neil, the mayor’s assistant, is unable to attend, unfortunately. Deb Donovan, the reporter, takes the bottle. The neighbors discuss the state of the city and how they think the new mayor will do. Some have hope. Donovan, the veteran reporter, has her doubts about what Nakano can accomplish at city hall.

At city hall, Mayor Nakano is meeting with his staff, discussing the events at last night’s gala. They’re discussing how they can turn the messaging from last night to their advantage so that Nakano’s vision of the vigilante threat can still ring with the Gothamites. Neil, on the other hand, is not pleased with the security arrangements and wants heads at the GCPD to roll for incompetence. Nakano asks his team to prepare a statement for tomorrow, and he dismisses them.

In an abandoned apartment, the Party Crashers who escaped Batman at the mayor’s event are trying to hack one of the cell phones they stole the other night. Suddenly, they receive a text. “Knock, knock.” There’s a knock on the door, and suddenly Batman appears. While this is happening, there’s a knock on the door of Sam and Sarah Worth, two of Bruce’s neighbors. The groggy wife opens the door, and everything goes black.

The next day, Bruce is startled by a scream coming from Worth’s home. He arrives to find them distraught and, after police officers arrive, is joined by Deb Donovan. Sarah has gone missing. The terrors that have struck other parts of Gotham have made their way to the elite’s front door, and Neil, Nakano’s assistant, seems to be the culprit.

Analysis: So, we are back from the two-month hiatus that was Future State, and we are now entering Infinite Frontier. What a wonderful way to kick things off from Tamaki as she begins this run on the regular title. After Future State ended, one question that I asked would be how would we return to the present-day Gotham and how soon before the breadcrumbs leading to Future State would be revealed? As we saw in Batman #106 and in this issue, breadcrumbs are falling rather quickly as we see more and more hints come out from both books. Masked vigilantes are still a thorn in the side of the new mayor. The GCPD continues to be ill-equipped to handle it. Batman still saving the day continues to make the mayor look bad.

I can’t express how happy I am to see the two main Bat-books aligning with one another. In fact, we are also seeing it in the secondary books and the anthologies like Batman: Urban Legends and the digital series The Next Batman: Second Son falling in line with the main story. James Tynion IV might not have the title of showrunner, but you can see his influence in each title you pick up (full disclosure, I haven’t read Harley Quinn; please don’t @ me). That’s how a universe is built, and I am here for it. The only thing I want to see now, particularly in the two main titles, are the rest of the Bat-Family (I guess Ghost-Maker as well) cross over between the titles. We also get introductions to some players that first appeared in Infinite Frontier #0. We’re introduced to Deb Donovan, who appeared in the story as the events of A-Day played out. It will be interesting to see how she’s developed in Tec and whether or not she is of importance as Infinite Frontier might suggest. Overall, Tamaki is off to a good starting taking the reins of Detective Comics as she and Tynion lead Batman forward into Infinite Frontier later this year.

What can be said about the art? It’s Dan Mora, so of course it’s great. His command of the page is phenomenal whether it’s a double-page splash or a single panel. You see this command beginning from the cover as he is able to give the reader a glimpse of what to come in very little space, drawing what’s coming for Batman in small shards of glass. As soon as this cover was revealed, I made it my wallpaper. Dan Mora and colors by Jodie Bellaire can make any book enjoyable despite the level of the story. But when there’s a good script, they can make the story great. There is a downside to this, however. Mora’s time on Tec is limited as he is already slated to be off the book in a few issues. This is always an issue when top-tier artists, who command top-tier dollars, appear on series. They are never around long enough.

Synopsis: Damian stands next to the body of the member of the League of Lazarus that held his mother captive in the first part (see Batman #106). Talia is disappointed that, once again, Batman’s influence has caused Damian to abandon his birthright and hesitate. Talia gives the history of her father’s empire and how the League of Lazarus, once a member of the al Ghul’s dominion, rebelled against her father. The assassins were sent as a message to Talia, who has no interest in the League of Lazarus nor their upcoming tournament. Damian wants to know more about this, but his mother ignores him. She is, however, interested in regaining control of Leviathan, which she lost in Event Leviathan, and rebuilding the al Ghul empire. The two depart in Talia’s helicopter.

Talia wants Damian to help her in rebuilding the empire, not as her son and heir, but as an assassin, just as the others that serve her. Perhaps this way he can earn his way back into her good graces. But to do so, Damian needed to decide whether he would follow his training from birth or the in the ways of his father. Would he be the Demon or the Detective? Before she realizes it, Damian is gone. He has made his decision. He is going to fight in the League of Lazarus’ tournament.

Elsewhere, members of the League of Shadows are making plans as well. They want to bring the League of Lazarus back into the fold, even if they must do so by force by entering the tournament. There is some concern that Damian will enter the tournament since Talia couldn’t be convinced to enter herself. But they have their own secret weapon who can match blows with Damian. What better way to take out a Robin than with a hawk… better yet, a Hawke?

Analysis: Whoa. What an exceptional story. I mention on the latest episode of the TBU Comic Podcast that my excitement level hadn’t changed after reading part 1 of “Demon or Detective.” I had every intention of picking up Robin #1 when it releases. Boy, has that changed. I am genuinely excited about this story now. Connor Hawke is back. Who could’ve called this happening in a Robin book? My interest level was ten. Now that level sits at fifteen. I am terribly excited to see the role Connor (who hasn’t been seen in quite a while) plays in the overarching story with Damian and how soon before they come to blows. This was a great finish by Williamson for his two-part teaser for the new book.

Of course, there’s only so much of a story that can be told in eight pages, but Williamson did great telling the story that he did. Part of this credit goes to the art and colors from Gleb Melnikov. The dark tones tell how serious and dark this story is going to be. The use of red, by contrast, particularly in Damian’s costume and specifically in the blood, is superb. I can’t wait to see more of this when the series is released.

Not counting Dark Detective in Future State, Detective Comics #1034 is a great start to Tamaki's run. All of the Bat-Books seem to be lining up as they should, and the issue's ending has me anxious to see what's next. It's truly unfortunate that Dan Mora can't stay on the book long-term because his work is masterful.