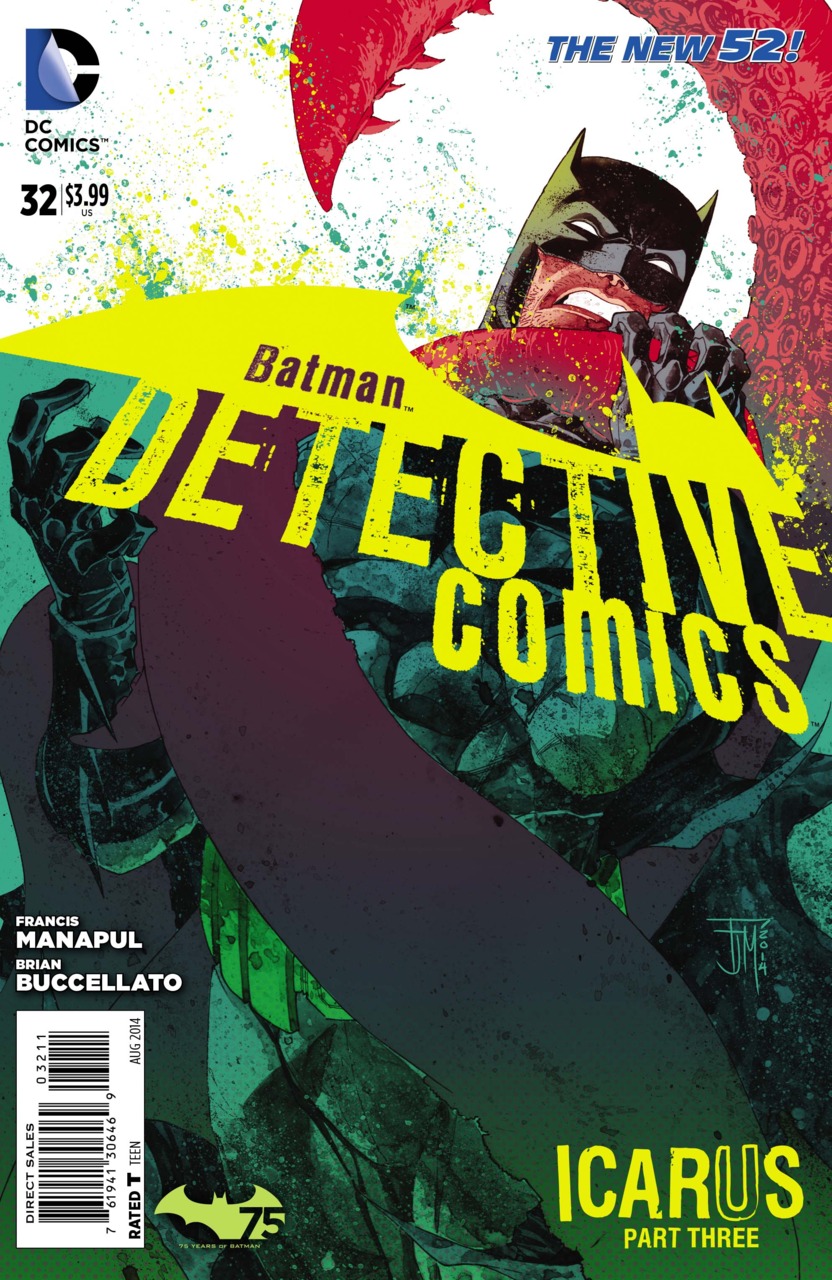 Again, I know I'm sounding like a broken record, but this cover is freaking gorgeous! I love it when artists perfect the art of the ink splatter, and Manapul is a master at it. Using it especially with water, gives it a lifelike, unpredictable / inconsisten element that water brings. And we will see that through this entire issue.

I love how these guys are using Bullock. He's in the spotlight like he has never been in before, and he is eating it up. Annie Aguila has a nice moment in this comic reflecting on her mothers death with Batman, that doesn't seem forced at all, and was handled very nicely. We get a nice continuation of story, amazing art, awesome character progression (which Manapul & Buccellato excelled at on The Flash), and a solid ending that leaves you wondering what will come next.

We open with Batman searching through Elena's car, which is buried in the ocean just off the pier, when he finds just what he's looking for, but we don't know what that is. This panel was cool to see. We get our first interior monologue, it seems from this creative team, but it was cool how they used the bubbles in the ocean as word bubbles.

Later, Bullock and his crew have received an anonymous tip about the car, and the human trafficking. They are searching through everything, and Bullock orders the cops to take the documents in the car, and try to find out who signed off on the shipments, trying to find a link to Bruce Wayne. Here, is where Bullock shines. His attitude is on full display, and you can't help but think of the Animated Series.

Annie is sitting on the edge of a pier, talking to her mother as Batman approches. The drugs she has bought trying to find the source of her mother's killer have been scattered over the pier. Probably in frustration over not finding who she was looking for. Batman tries to get on common ground with her, but she is just upset, understandably. There are a few Easter eggs in this scene. Maybe they are hints of future storylines, maybe they just felt like throwing these in for fun. On a wall covered with graffiti, there are at least two: Harley Quinn, with the face & smile of the Joker, and symbol for Anarky. A few pages later, there is a copy of the Gotham Gazette, with a picture on the front page, who is clearly the Penguin. Also, this is one of those rare occasions where you see Batman out at daybreak.

We cut over to Harvey Bullock's apartment. At first I thought Harvey was a crazy cat man, but then I realized that it was the same two cats broken up by the panels. We learn a lot about Harvey in this double page spread: He loves his cats, one named Milo (zoomed in on a container in the fridge for that one) and the other named Sprinkles, who is being treated for cancer. He likes beer. He enjoys watching, and sometimes playing basketball (from the ball and sneakers in the corner of the page). He is consumed in his work (from all the case files in boxes all over his room). He is a reader. His mom still calls to tell him that he needs to find a woman. And, his lead was right, and they have found the man who signed off on the papers, and he does work for Wayne Enterprises. They go there, and catch a man named Jeb Lester just as he was leaving with documents to cover his tracks.

Batman has triangulated all the calls to Elena (so he must have grabbed her phone from the car in the opening page) to an abandoned aquarium. He even says how ironic that The Squid's hideout is at the aquarium. The Squid's squid grabs Batman, and tries to eat him, but Batman electrocutes the sucker, undos his utility belt, and detonates it, leaving a hole in the floor of the aquarium & putting everyone in the same room. Don't worry, no squids were killed in the making of this comic, he fell from the aquarium floor hole safely into the ocean. Batman gets up to find himself in the middle of a standoff between the Squid's men, and the biker gang, Kings of the Sun. Only problem here, (and I'm reaching) is that the squid's anatomy is off. The eyes are misplaced. Of course, this is a comic, and the squid is eating people, so maybe this is a mutant squid that happens to look different. This comic is so freaking awesome! Why are you not getting this?! You are, right? Buy. This. Read it. Your welcome.