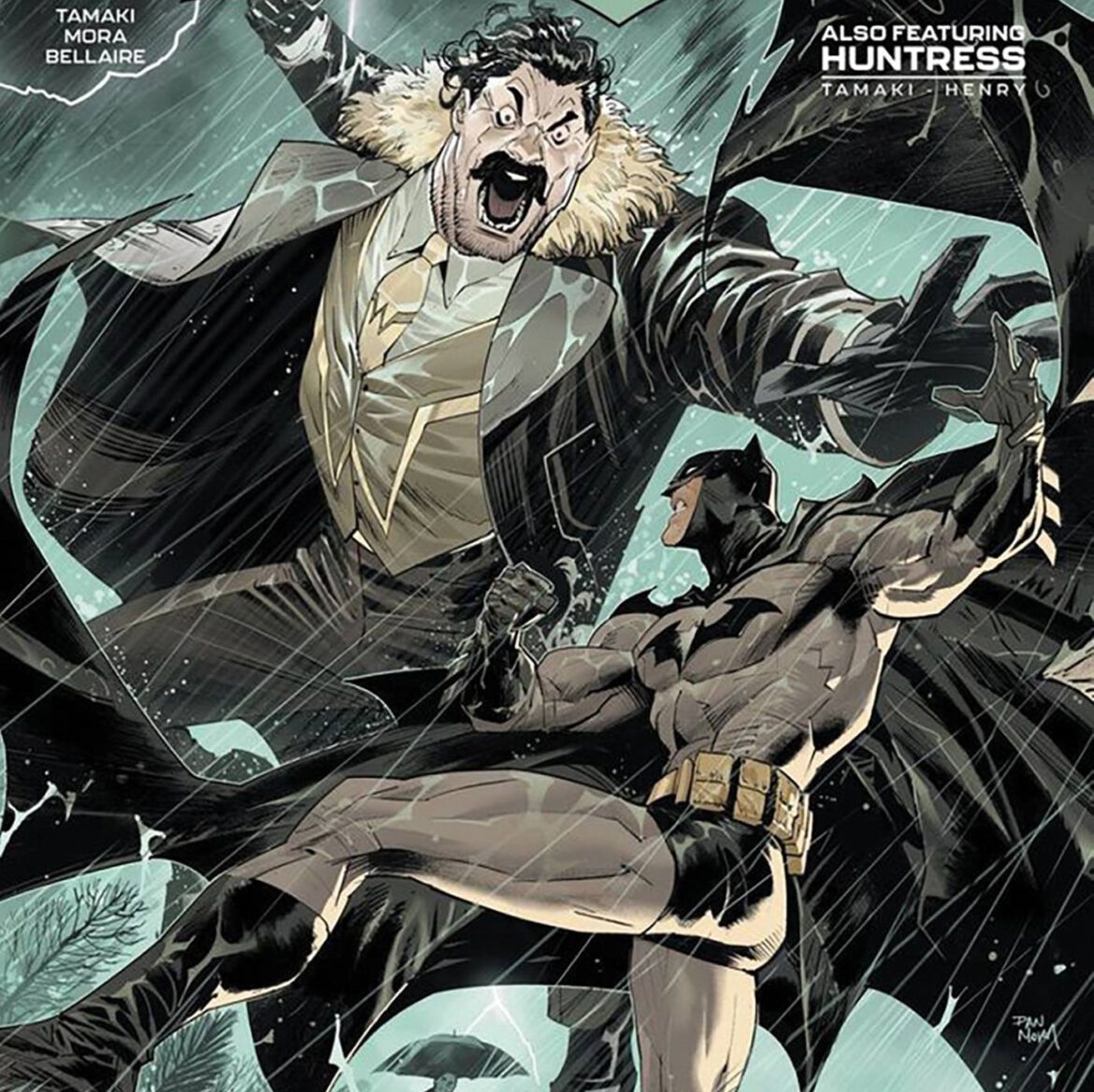 Overview: In Detective Comics #1035, things take a turn for the weird and creepy in Gotham City, as Batman dives deep into an investigation. In the backup, Huntress makes and then loses a friend.

Synopsis: At Sam Tern and Sarah Worth’s home, Tern is pleading with a police officer to find Sarah. In “Micro-Cave 7A,” Batman glumly reflects that in Gotham City, missing persons do not come home. In his office, Mayor Nakano fields a call from the rich and powerful Mr. Worth, promising to do everything possible to find Sarah. Batman picks his way through the details of the case in his mind, moving through the tunnels as he thinks. He realizes that Sarah’s abductor likely would have used the sewers just as he shines a flashlight on a limp, bound body. GCPD discovers blood on a manhole cover and sends units swarming into the sewers. Batman confirms that Sarah is dead and subsequently hears GCPD charging through the tunnels, motivated by Mayor Nakano and his desire to placate the Worth family. Batman flees but is pursued by the officers who open fire and injure Batman. He is declared a suspect in the murder. At Sarah Worth’s funeral, Bruce watches the large, murderously angry Mr. Worth publicly demand justice for the murder of his daughter. Batman continues to think through the circumstances of the crime, eventually tracking down Sam Tern, who has been behaving strangely.

Tern pulls a gun on Batman, and in the process of disarming him, Batman notes an odd look in his eyes – not fear, but “pure violence.” Mayor Nakano’s staff struggles to write a press release, and one of his aides-de-camp is struggling with a massive headache and visions of some kind. Gotham is turning uglier and more violent by the moment, as a young woman is accosted while walking to her car. The woman is rescued by Huntress!

Meanwhile, the tunnel where Batman found Sarah Worth’s body is filled in with concrete on a rush order, thereby destroying any possible evidence. Bruce walks home in the night, musing on how strange everything feels in the case. He looks up and sees an odd figure shadowed near a streetlamp. He looks closer and realizes it is Sarah Worth herself, appearing for all the world like a zombie of some kind.

Analysis: The opening story in Detective Comics #1035 is an extremely strong story. Tamaki controls the narrative tightly; there is not a word misplaced and all of the plot points and changes feel crisp and in tune. This issue feels like a master storyteller at work; you sense there is more going on behind the scenes, whether it is with Mayor Nakano and the gigantic, almost Kingpin-esque Mr. Worth, or with the peculiar behavior of Sarah’s partner, Sam Tern. Both the setting and the Dark Knight himself feel connected to what we know of Infinite Frontier and Batman’s place in it thus far. Tamaki incorporates key details, such as Batman’s use of Micro Caves, without belaboring the point and re-explaining the larger context in which the story unfolds.

I am quite insistent that Detective Comics should feature the genre of detective fiction (hence the title). This is an ace detective story, and it is always thrilling to see the brilliance of Batman’s forensic mind at work. Part of what makes Batman one of the most extraordinary characters in all of comics is how he matches the power, agility, and speed of his physical body with the same characteristics of his mind. Batman’s investigative brilliance is key to the character and hence to the foundation of the entire Batman Universe. This is a tremendous detective story so far, and I practically jumped out of my seat when I saw the return of the living dead.

Mora’s artwork is similarly incredible. Batman is depicted in the realist aesthetic I prefer, constantly cast in subdued, Gothic tones of blue and grey. Batman’s cape spills behind him to fill most of one panel in a beautiful image worthy of Breyfogle. Mora manages to capture the oddness and creepiness of Gotham in its current state, without straying too far into the horror aesthetic preferred by Guillem March. Even Sarah Worth herself, ostensibly returned from the dead, is not drawn as an obvious Walking-Dead-style zombie. You really get the sense that the creative team is confident and assured about what they are about and where they are headed. I will be sad to see Mora leave!

Finally, although I know his work is a bit polarizing, I found Lee Bermejo’s variant cover to be fantastic.

Synopsis: The backup for Detective Comics #1035 starts with Huntress standing alone in an alley, reflecting that friends are not really her style. This fact is what makes her relationship with Mary Knox so unusual. Mary has been robbed at least six times until, finally, Huntress manages to intervene in the latest mugging attempt. She then helps Knox locate her escaped cat Doug, and the two chat for a moment, quickly giving way to a heated argument. Huntress advises that next time, Mary should give the assailant her phone. Mary disagrees.

Despite their argument, the fact that Mary never stops talking, and that she walks Doug on a leash, Huntress grows accustomed to Mary’s company. She joins Mary on her evening walks until one night when Knox does not show. She finds Mary clutching Doug on her stoop. Mary informs Huntress that she has had a panic attack and that it is related to a trauma she has experienced from a man Mary was seeing. The man assaulted Mary when she did not do what he wished. As she remembers, this encounter, Huntress reflects that she would rather “shoot tragedy in the heart than talk about it.” Hence, she realizes that she failed to say any of the things a person should say when a friend relates hurt and trauma.

Three weeks later, Huntress goes looking for Mary Knox. She cannot find her and thinks that when she gets close to someone, all she is left with is a “permanent ellipsis … of all the things I should have said.” She finds Doug with blood on his fur and locates Mary’s body in an alley. She has been dead for no more than a few hours. Standing on a rooftop with the phone that Mary refused to surrender, Huntress muses that while she is not a good friend, she is very talented in administering payback.

Analysis: Wow! I don’t typically read much with Huntress, though I do like the character. Tamaki again delivers on a rich, emotional, and compelling story. Huntress’s difficulty in making and keeping friends is relatable, and her sorrow at losing Mary is profound. As in the main story, the narrative is tight and well-controlled. The dialogue is crisp and even profound (the ellipsis metaphor is incredible IMO), you feel connected to both characters and perhaps to Doug the cat as well.

While it is not exactly original, I am always here for a good revenge story. And the way in which Huntress turns her pain into resolve and anger of course parallels Bruce’s own journey as Batman. It’s a nice touch, and this is a case where you feel the additional story really adds something distinct to the entire book. While I would be extremely unlikely to buy a standalone Huntress comic of any kind, I loved this story and think it contributed to the overall value of Detective Comics #1035.

Both the main story of Detective Comics #1035 and the backup story soar. Writer Mariko Tamaki is off to a fantastic start, and I am so excited to see where the book goes.