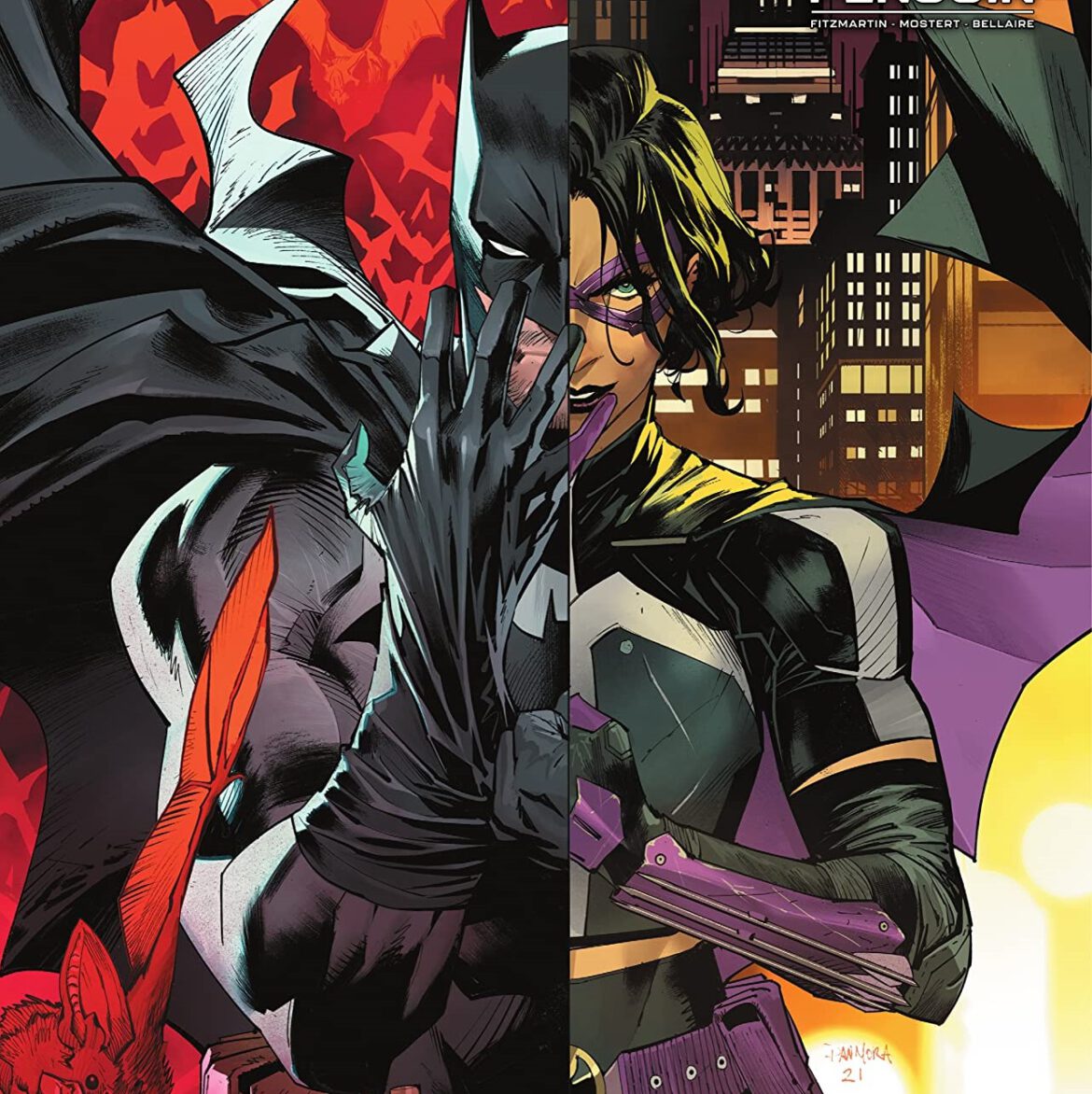 Overview: In Detective Comics #1038, after blowing up a GCPD precinct in his mission to take out Bruce Wayne, Mr. Worth comes face-to-face with Batman. Plus, in the backup story, Penguin’s influence over the Gotham underworld does not seem to be what it once was. How can he fix this?

Synopsis: As Detective Comic #1038 begins, a furious Mr. Worth stares down Batman, determined to know the whereabouts of Bruce Wayne. Batman attempts to reason with the angered father but fails. They go to blows before Mr. Worth launches another RPG in the direction of the Dark Knight. Not far from the action, Lady Clayface, still in the form of Sarah Worth, is concerned about her safety as Huntress tries to make her way to get her to safety. Huntress does not make it before Lady Clayface decides to leave the micro-cave. Batman and Mr. Worth continue their battle, tearing up the sewers as they go. Mr. Worth grabs Batman by his neck, promising to make the sewers his final resting place. He is distracted, however, as Lady Clayface, still appearing as Sarah, emerges from the smoke. Worth attempts to reach his “daughter” but fails as Lady Clayface dissolves before his very eyes. This allows Batman to capture Worth and bring him into the GCPD for the destruction he caused. However, as quickly as Mr. Worth was arrested, he is released to the surprise of many – including Mayor Nakano.

Batman hides out at Huntress’ place as they plan their next move. They conclude that the answer to the parasitic problem plaguing the city is within Mayor Nakano’s office. As they plan their next move, which will not take place before sun-fall, Oracle informs them that the newly released Mr. Worth is holding a press conference. He promises to hold Batman and Bruce Wayne accountable for the death of his daughter and says that they will both die.

As Mr. Worth leaves his press conference, he is approached by Hue Vile, Nakano’s assistant. He is a fan of Mr. Worth’s strength and determination and has an offer to make that will allow Mr. Worth to get the justice he is looking for. After Mr. Worth expresses his interest to hear more, Vile makes a phone call. Mayor Nakano would like to see someone. He promises it will be an “exclusive.” Later that night, Deb Donovan walks into a dark office at city hall, looking for the mayor or his assistant. She finds Vile standing alone waiting on her. Before she could turn to leave, Vile grabs her.

Bruce gets a text from Deb. She needs help. Knowing a trap is waiting on them, he and Huntress head to the source of the text – the sewers. As they run into the sewers, Mr. Worth approaches from behind, waiting at the entrance. He eventually gets a call from Hue Vile. Everything is ready to go. Batman and Huntress find Deb Donovan tied up. There are explosive timers all around them. As Batman goes to free the tied-up news journalist, Huntress attempts to take out the bombs before they go off. Time is running out. Batman frees Deb, and the trio heads for the exit. As they reach the entrance, a timer reaches 0:00… KABOOM!!!

Analysis: There are so many ways to express how much I enjoyed Detective Comics #1038. A lot of it is similar to what I have said about previous issues. What sets this story apart from the others, however, is the amount of action seen in this issue’s story. The previous issues of the arc were very heavy on Bruce Wayne and very heavy on the detective work. This issue focuses on neither. For someone who has loved the earlier issues of Tamaki’s arc thus far, mixing things up is a great idea. The story had a natural build to this point, flowing seamlessly from issue to issue.

The more Tamaki writes about Mr. Worth, the more that I like him. This is far different than my take on likewise new characters that have appeared in the pages of Batman. I have yet to make a connection to characters such as Ghost-Maker and Punchline (although I do have a small liking to Clownhunter). I give credit to the development of the character Tamaki has done. She presents a true physical opposite of Bruce Wayne – someone powerful, rich, and determined. He is someone you can also be sympathetic to. He has lost two children, one to a heinous murder. It is not hard to feel sorry for what he has been through in his desire for revenge. You might not have had that sympathy without the backup story last issue. I did not. Watching him fall to his knees as Lady Clayface disintegrated before his eyes really got me in the feels. This goes to Tamaki’s ability to tug at a reader’s emotions.

There are a few questions from Detective Comics #1038. The most important centers around Mr. Worth’s relationship with Hue Vile. In one of the panels, we see Vile revealing his monstrous self. Is he doing this in front of Mr. Worth or was it a flashback? Could it be possible that a man as strong as Mr. Worth could be in the thralls of the parasitic Vile (doubt it, but it is an interesting idea)?

Even though I still miss Dan Mora’s work on Detective, the art from Viktor Bogdanovic continues to impress me. There is a clear difference between his pencil work and Dan Mora’s. Despite that fact, however, the art holds its own in complementing Tamaki’s story. While Dan Mora is returning soon – actually in the next issue – making Bogdanovich a mainstay on the book would not be an issue. Jordie Bellaire should do colors until she retires. It is so rich and beautiful to the eyes.

Story #2: “The March of the Penguin” by writer Meghan Fitzmartin and artist Karl Mostert

Synopsis: The backup in Detective Comics #1038 starts with things not going so well for Oswald Cobblepot. Despite being a kingpin of Gotham’s underworld, the Bat-Family no longer see him as a big fish, leaving him to the quips of the GCPD. Even his henchmen are starting to question whether it is worth it to be in his employ. The media thinks that he has lost his touch compared to the new breed of crime bosses in Gotham. Penguin has had enough. He takes out his frustration on those who have questioned him. It is time to show Gotham who he really is. He starts by returning that call from Mr. Worth that he has been avoiding.

Analysis: This was a quick little story. If it was a standalone tale, I would not like it. But, as we saw in the Tamaki story and with the history of the backup stories in Detective Comics, Fitzmartin’s story gives the reader a peek into what is to come with Tamaki’s Batman/Mr. Worth battle. We get a glimpse of Cobblepot watching Worth’s press conference. We have seen previous stories make their way into the main plot of the story. It is going to be interesting to see how Tamaki folds Fitzmartin’s stories into her main story. This is no different. Fitzmartin’s story in Detective Comics #1038 leaves the question, however, as to what has led to Penguin’s downfall as a big bad in Gotham? Of course, folks are laying low with the new mayor going after vigilante and villain alike. To be questioned so openly, however, is pretty low, and I want to know how he got there.

For some reason, Karl Mostert’s art looks a lot better in this story, than it did in Detective Comics #1037. While some of the faces still maintained that jagged, rough look that did not look great in the last issue’s fundraising story, it looked really well in this story. Perhaps it is due to how dark and gory Fitzmartin’s script is. No matter what, it works here, and Jordie Bellaire’s colors make it all the better.

Despite knowing there are more issues to come in this arc, this story ended like a penultimate issue. Considering how good it ended, I am most definitely on board with more. In looking at the trend with the backup stories in Detective Comics, it is going to be interesting to see the role Penguin plays in this plot.