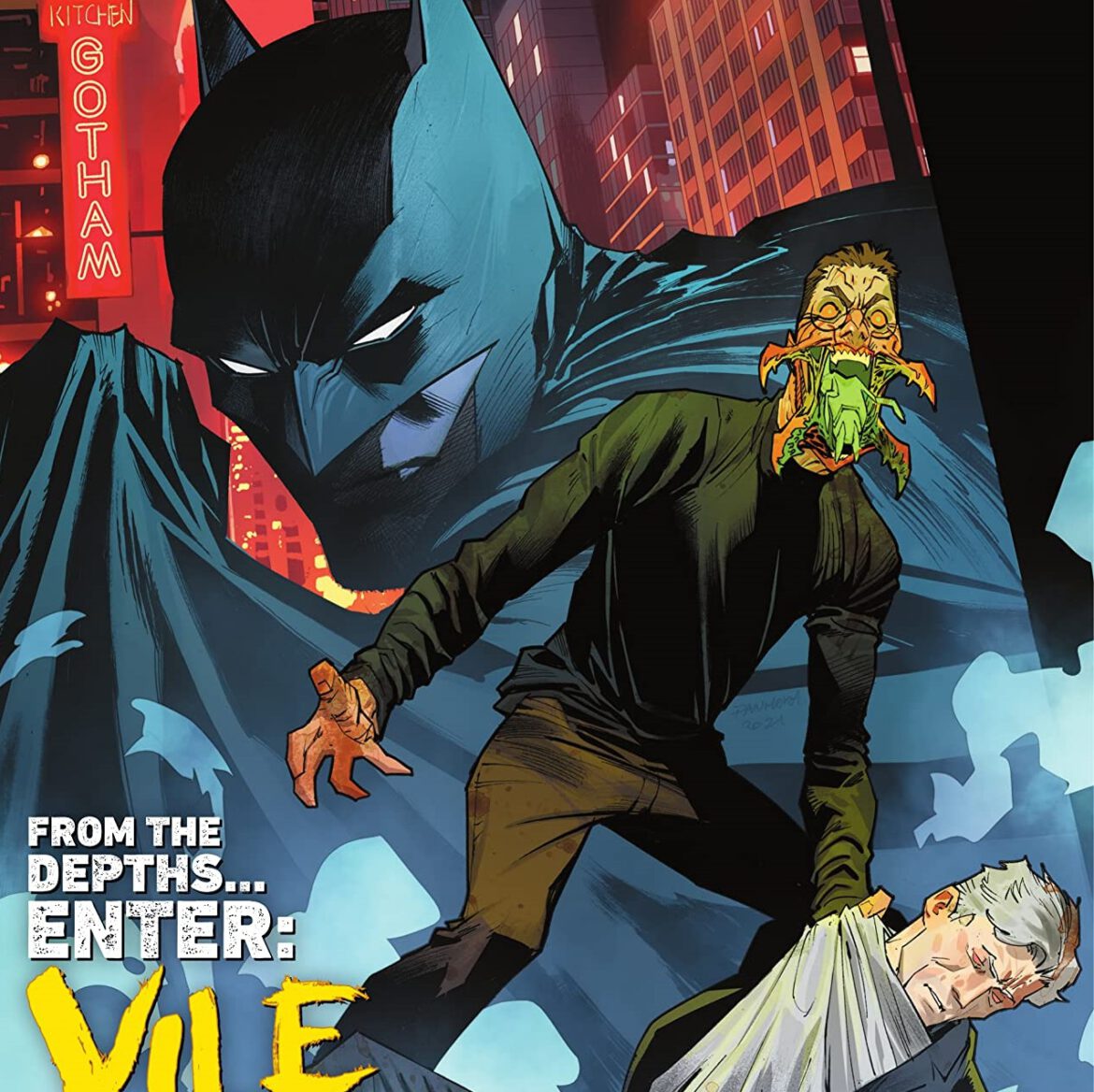 Overview: In the finale of “The Neighborhood” story arc in Detective Comics #1039, Batman comes face-to-face in a final battle with Mr. Worth and an unexpected attacker.

Synopsis: As Detective Comics #1039 begins, Batman, Huntress, and Deb Donovan escape the exploding sewer line, Hue Vile and Mr. Worth look over the chaos they’ve created for differing reasons. The Bat-Family springs into action while the mayor declares a state of emergency as he calls for missing assistant, Hue Vile. Meanwhile, Vile is watching the blast from afar, reveling in the chaos, and feeding off the violence and anger as he thinks back to the day he and the parasite within him first came together. After getting to safety, Deb Donovan attacks Batman, revealing that she too has been infected by Hue Vile. Huntress grabs her and subdues her. Batman and Mr. Worth come to blows again, but this time he isn’t alone as a bunch of the Penguin’s thugs team up to take out Batman.

From the clock tower, Oracle guides members of the Bat-Family, helping citizens get to safety. She relays to Huntress details about Hue Vile and the parasite that he’s been infecting Gothamites with. Hospitals have been treating patients with antibiotics. Oracle also reveals that the parasite appears sensitive to light. Oracle gives Helena the location of Vile, not far from her location. Huntress sets out in pursuit, finding him delighting in watching the city burn. As Huntress approaches, he appears to be willing to turn himself in. Right as Helena goes to place cuffs on him, the parasite attacks, grabbing Huntress by the face. Instinctively, Huntress uses a glass shard to stab the attacking Vile. As he falls to the ground, Huntress senses that something is wrong. She’s been infected.

Batman dispatches the Penguin’s henchmen and traps Mr. Worth in a pile of cement. As he watches the cement hardens, he’s suddenly attacked – BY HUNTRESS. She’s fighting the parasite’s control, but she continues to shoot crossbow bolts at Batman, who avoids each shot. She jumps on Batman and attempts to stab him, still trying to fight back the parasite’s control. It’s winning, however, as the knife inches closer and closer to Batman’s face. “Light,” she tells him. Figuring out what she meant, Batman shines a light in her eyes, incapacitating Huntress and the feeding Vile. He feeds no more.

As the chaos wanes, Mayor Nakano gets a report on the events. Mr. Worth is gone, nowhere to be found, and there’s still no sign of Hue Vile. Nakano dispatches the police to look for him. Barbara gives a report on Helena and Deb Donovan to Batman; they’re both in induced comas, but they seem to be improving under the cocktail of drugs being given to them. Barbara asks Batman what his next course of action is. For Batman, the answer is simple. If he’s to get a grasp of the case against him, he can’t do it on the run from police.

He’s turning himself in.

Analysis: Still the best Bat book out right now (just getting it out of the way)…

That being said, there is a lot to enjoy in Detective Comics #1039. First, Tamaki accomplished something most writers don’t. She has me enjoying a new character in Mr. Worth. Typically, this takes a while to happen (Brandon Thomas’ Duke) if at all (Harper Row). However, I am a fan of Mr. Worth. Some say he’s nothing more than another Penguin – old Gotham money exerting the weight of his influence. But he’s more. He’s brute force that can go toe to toe with Batman. He’s not afraid to take on Batman alone or with help as it seems he is setting himself up to be a mob boss. With his escape, as with Vile’s, Tamaki is setting them up to be players down the road. While I could do without the parasite, he has a role in Tamaki’s universe of Gotham. I can’t wait for more Mr. Worth.

Tamaki sets up several things with this final issue of the story arc. First, Bruce is going to jail again. With this, I assume we’ll see Mr. Worth sooner rather than later, which I don’t have any concerns with. Detective Comics #1039 seems to also set up the upcoming Secret Files one-shot featuring Huntress. Solicits for the issue states that Helena will have some sort of ability. Now, we have an idea of where it comes from. It’ll be interesting to see what this ability will be. Will it be an extension of the parasite, meaning we’ll likely see more of Hue Vile (my personal guess) or will it be something different? Be on the lookout for this issue.

So, as we end this first arc, the high points have been:

Granted, as great as this early run has been, there have been some hiccups. This has specifically occurred with the backup stories. Some have been ill-timed, such as the Huntress backups, which should have begun an issue earlier. Some were not needed at all. The Ridley story and this current issue’s backup by T.Rex are good examples. They haven’t, however, taken away from the work Tamaki has put together.

Story #2: “The Life and Times of Hue Vile” by writer and artist T.Rex

Synopsis: Hue Vile sits in an empty Gotham diner talking to the chef about his life as a kid growing up with the parasite living inside of him. He discusses how the violence of others feeds them and allows them to be stronger. But there was a level of violence they wanted to feed off more than anything else – Gotham City, and in particular, Batman. But to get to Gotham, they would have to plan things out, be incognito. It would be the Joker War that would bring them back to Gotham.

It’s time to feed and Vile starts by attacking the chef.

Analysis: This was really not a great story. Considering we got some history of Vile in the previous story, this doesn’t add much at all to overall narrative of the arc. In fact, the story probably takes away from the issue as a whole. The saving grace for this story is the art. I really like T.Rex’s style here. It reminds me of Ken Rocafort’s (whose last work with Batman was in Peter J. Tomasi’s run on Detective with Detective Comics #1029), which is also a little rough. Granted, I wasn’t a fan of Rocafort’s art in that run, but like T.Rex’s here, I think it fits well here. Simon Gough’s colors is a good complement to the pencils. It’s unfortunate we didn’t get a better story.

While Tamaki's story remains strong, the backup story weakens the issue. I'm looking forward to the next story arc as we see Bruce turn himself in. It will also be interesting to see how this plays into the upcoming Huntress one-shot.