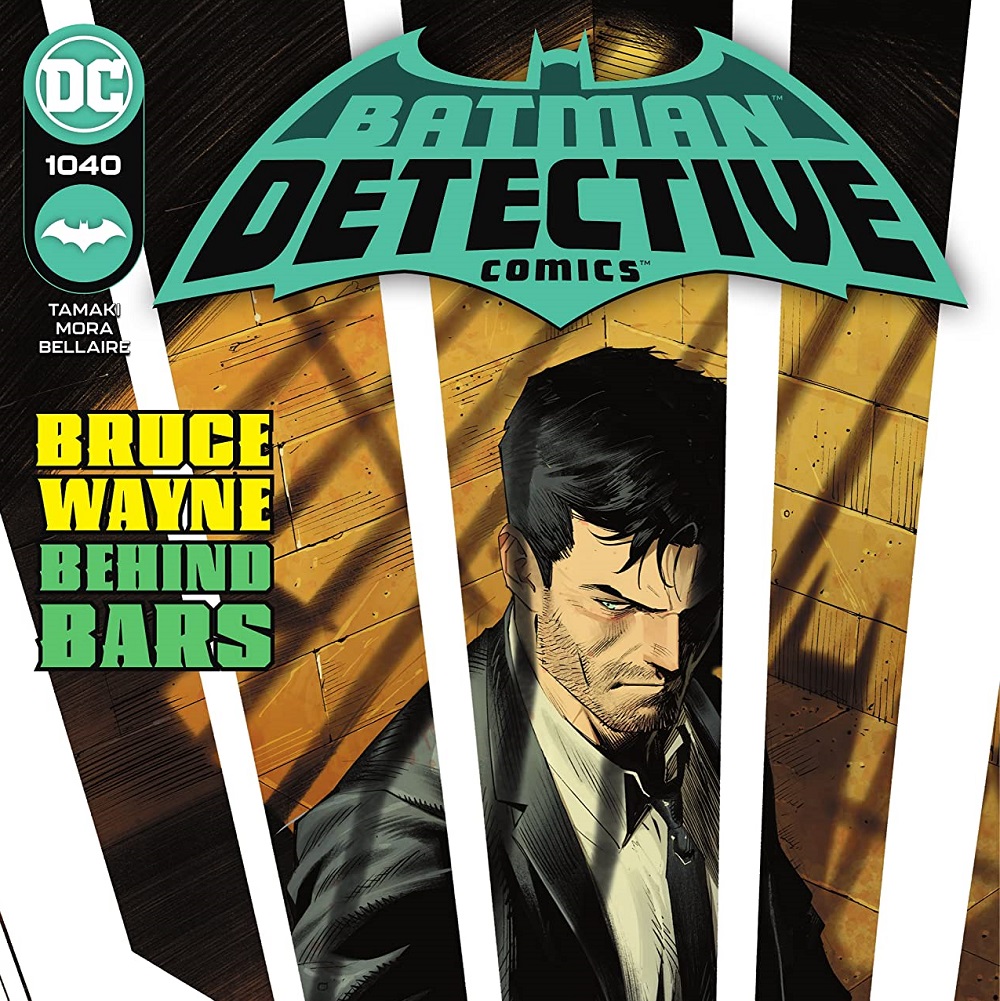 Overview: In Detective Comics #1040, a new story arc begins with Bruce Wayne turning himself into GCPD for the death of Sarah Worth. In the backup story, we see the final days of Man-Bat.

Synopsis: Detective Comics #1040 begins as Bruce Wayne walks into the crowded Midtown Precinct of the GCPD and turns himself into the desk commander. They place him in a holding cell and contact the detectives investigating the death of Sarah Worth. As he takes a seat in the chair, Oracle begins scouring her network for evidence to clear Bruce Wayne of Sarah’s murder. As she works, she checks in on the condition of Deb Donovan and Helena Bertinelli who are still recovering from the parasitic infection from Hue Vile (as seen in Detective Comics #1039) in the hospital. The nurse tells Barbara Gordon that both patients were cleared of the parasite. As the nurse walks into the patients’ room, she finds Deb alone; Helena is nowhere to be found.

Back at the Midtown Precinct, Bruce sits next to a man who has had entirely too much to drink. The man recognizes the son of Gotham and reveals that he knows a secret – Bruce Wayne is Batman. He tells the story of his encounter with Batman and Joker as they battled through the alleys of Gotham. As the storyteller makes his way to a roof to escape the violence, he is eventually joined on the rooftop by an exhausted Batman, who doesn’t realize he’s not alone on top of the roof. And that’s when he sees the “truth.” Batman temporarily removes his cowl to get something out of his eye, revealing his secret identity. The man then puts two and two together. Bruce Wayne keeps having all these bad things happen to him to throw people off. It’s obvious that Batman and Bruce Wayne are one and the same. Before the conversation could go any further Bruce’s new friend falls asleep. Little does Bruce know that he’s the topic of conversation somewhere else in the precinct as well. A rogue cop relays information on Bruce’s residence to the Penguin. The Penguin, in turn, gathers his goons together. They’re about to make a special delivery.

It’s Monday morning and Bruce still finds himself incarcerated at the precinct. His friend is finally awakening from a drunken slumber, but he remembers nothing of his conversation with Bruce, warning Bruce to not believe a thing he says. The desk sergeant calls for Bruce. After the detectives revealed the evidence they gathered, they were able to confirm Bruce’s alibi and are setting him free. They apologize for the inconvenience. As Bruce leaves the precinct, his new home goes up in flames.

At the Gotham Shipyard, Penguin meets with Mr. Worth. Penguin tells Worth that Hue Vile is alive and capable of allowing them to move forward with their plans – to make Bruce Wayne pay for what happened to Sarah Worth. Things have already started, beginning with the destruction of Bruce’s home. For things to be successful, Penguin explains, Batman has to be removed from the table. Once that happens, Bruce Wayne would be theirs.

To get rid of Batman, however, the unconscious Vile has to be their weapon.

Analysis: Detective Comics #1040 was a very quick read, and some might say that the issue doesn’t move the story along quickly enough. To this argument, I will say that this is probably true. For this issue, however, that is absolutely fine. This was, for a lack of better words, a fun read simply because of the interaction between Bruce and the drunk man next to him. The flashback story was just fun to read, and when you add the colors from Jordie Bellaire, it just makes that part of the issue a whole lot better. I loved seeing the classic Batman in blue. That sealed the deal with the issue.

As with Tamaki’s story in the present, it is serviceable as well. As mentioned before, things weren’t moved along at the pace in the previous issues, but that’s okay. I don’t think it was her intention to move things along too quickly. I see Detective Comics #1040 as more of a transition issue, with our next story focusing on the new partnership between Mr. Worth and the Penguin. I fully expect there to be a double-cross before this arc is done.

Welcome back, Dan Mora. After taking some issues off, Dan Mora returns to Detective Comics, providing some absolutely great art. As Detective returns to a once-a-month format, I sincerely hope part of the decision was done to allow Mora the time to do issues, as someone who has been a fan of double-shipping of books, I would have no problem if Detective Comics wasn’t on one them and remains once-a-month. What takes away from the art, however, is the colors, which for this issue is done by the great Jordie Bellaire. The colors for the present seem off. Perhaps, however, this was due to the colors in the flashback story, which were phenomenal.

Synopsis: Batman sits atop a crypt at the Gotham Cemetery, looking over the gravesite of Kirk Langstrom, and waiting. As the rain falls, he thinks back to the events of the night when the man known as Man-Bat loss his life. After the events of Justice League #64 and Man-Bat #5, Batman and Man-bat find themselves face-to-face on a Gotham rooftop. Langstrom is looking for his wife Francine, who is nowhere to be found. Something has the once-renowned scientist afraid, and his wife is the only person who can calm him down. Unbeknown to Batman, a shadow haunts Man-Bat, causing him to be more and more afraid. The shadow gets stronger. Man-Bat warns Batman it’s near and that it feeds off of fear; his fear will allow it to come through.

Suddenly a giant monster springs from the now limp body of Man-Bat. He explains his plans for domination to Batman. After using Man-Bat’s fear to come into the world, he will feed on the fears of everyone else to get stronger and to multiply. A batarang does nothing to slow the beast down. Suddenly the monster is stopped as Man-Bat stands behind him. He commands. the monster to return to the gap in his soul from which he came from. Man-Bat doesn’t fear him at all. After a struggle, Man-Bat succeeds in returning the monster back where it came from. His last bit of heroics come at a price, however, as the severely ruined Langstrom falls to the ground. As he lay dying, he gets Batman to promise to tell no one of what happened to him, including Francine. There should be no chance of the monster returning.

As the rain continues to fall, Batman recognizes someone entering the cemetery. It’s Francine Langstrom, who has received word of Kirk’s untimely death. Batman wants to tell her how her husband died as a hero. After Man-Bat’s warning, however, he doesn’t know what to say.

Analysis: It was a little hard to follow this story in the beginning as I did not read the Man-Bat mini-series or Justice League. On a second read, however, I feel that reading those stories isn’t as important as where Man-Bat’s story is heading. It’s clear that it is setting up something, which could include stories outside Detective Comics as it specifically states to follow to see more. But Waters’ story does leave some questions as to what could possibly happen down the line. Could the monster in Man-Bat be the same as the parasite living within Hue Vile? It will be interesting to how things play out if it does go this route. (Editor’s Note: This short story sets up Man-Bat’s status in the upcoming new title headed by Dan Watters as confirmed on Twitter.)

The art from Max Raynor was stunning. It was accentuated by the colors from Arif Prianto. While the story was dark and emotional, requiring a darker palette of colors, it was perfectly done to allow for action (and the good-bye) to still be seen without issues.

If there was one disappointment it has to be the letters from Rob Leigh. While it was a good idea to distinguish the characters’ voices in the story, the lettering was too similar in style, causing me to re-read things a few times to make sure I was getting the character voices correctly aligned to the character.

Another very good story from Tamaki. While it didn't push the overall story far along as in other issues, that interaction between Bruce and the drunk with the flashback story was very enjoyable and worth the read. Welcome back, Dan Mora.