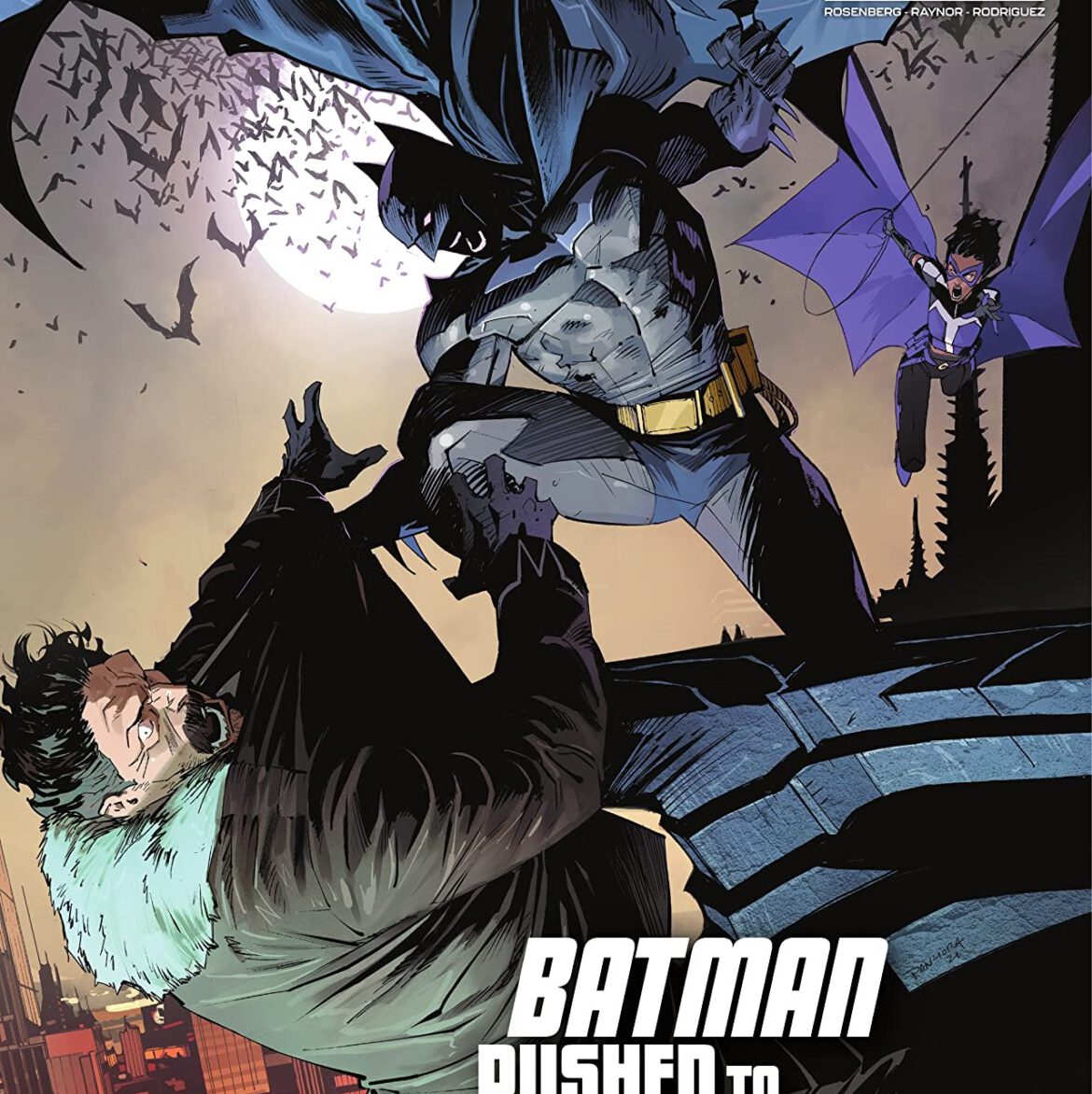 Overview: In Detective Comics #1042, Batman has been infected by Hue Vile with only Huntress standing in the way of Batman doing the unthinkable. Plus, who could be stealing the bodies of dead rogues? The oddest of dynamic duos team up to find out who and why.

Synopsis: As Batman struggles with the parasitic venom coursing through him as Detective Comics #1042 begins, Hue Vile awakens and attacks the guard watching over him, thwarting the Penguin and Mr. Worth’s plan of setting an infected Batman free on the streets of Gotham. Goons, now infected, begin attacking each other, telling the Penguin it’s time for him to depart. Mr. Worth, however, wants what he was promised, causing the Penguin to turn on his once-partner jury member.

Batman, under the control of the parasite, is sent on a deadly mission – to kill Roland Worth. As Batman grabs him, for the first time, fear comes across Worth’s eyes. Instinctively, he tosses Batman and takes off to escape, calling for help. Batman is right behind him, however, trapping him on the roof. Worth pulls his revolver and attempts to shoot Batman, but the gun is empty. After a few quick punches, Batman follows Vile’s orders and drags Worth’s body to the edge of the roof. As Worth hangs off the roof, Batman is fighting back; he can’t give in to Vile’s darkness. As he drops Worth, Batman musters enough willpower to use a Bat-line to break his fall.

Huntress arrives at the warehouse. With her new “vision” (see Batman Secret Files: Huntress #1 for more), she knows Batman is there. She can see him, but in the chaos of the Penguin’s goons attacking each other, she doesn’t know exactly where he is. She does, however, find Hue Vile, who summons Batman to kill her. Batman is fighting Vile’s thrall and manages to place cuffs on his hands. Vile is certain that Huntress is about to die, but as Batman crashes through the window, he flies over the startled Huntress and dives into the chest of the waiting Vile, causing him to spit out the parasite that’s resided within him since he was a child. Huntress quickly shoots the parasite with a crossbow bolt, not only killing it, but also its former host.

Bruce Wayne and Helena Bertinelli meet at the gravesite of Sarah Worth. They discuss the recent events and how Batman was able to overcome Vile’s control of him. Huntress states that she still has flashes where she sees others who were previously infected by Vile, but it’s not as strong as before. They depart.

At the Gotham City morgue, two pathologists dissect the corpse of the dead Hue Vile. They find within his body something that shouldn’t be there. As some of the foreign items fall down a drain, the pathologists realize what they are… eggs.

Analysis: So, the saga of Hue Vile comes to an end, or has it? As we enter Fear State, we now see how Tamaki intends to put her touch on the event. But the important question now is how well she brought this current story to an end. Looking at it honestly, it’s a mixed bag. On the negative end is the idea of the jury. The idea was put together poorly in the last issue, and as we see in this issue, they are virtually non-existent. So, the question remains, what was their purpose? Having an infected Batman go after Mr. Worth could have been accomplished in many other ways. The jury seems to be a poorly constructed idea. The fact that, despite the title, they, outside of Mr. Worth, play no major role in Detective Comics #1042, supports that theory. Something that I also found weak is the question that always seems to come up from time to time as to whether or not Batman can and will kill. Parasite-infected Batman is Tamaki’s play on this question, and, of course, the Dark Knight holds strong. I am of the belief that this idea shouldn’t be acted on if you’re not going to pull the trigger. Vile’s control of Batman could have served as a valid excuse had Batman performed the unthinkable and killed Mr. Worth. This act would have opened up a lot of exploration for the universe surrounding Batman. Unfortunately, that idea can’t be played out as we enter Fear State. I would love for a writer to take the idea and actually run with it.

What does work, however, is how Tamaki brings the story to an end as it pertains to Hue Vile the character. I absolutely love how she has written Huntress since coming on Detective Comics and hope this isn’t the last time we see of her. In the end, it seems the backup stories that appeared in this arc were truly important after all. In my review of Detective Comics #1039, I was quite critical of T.Rex’s Hue Vile origin story. Once again, however, Tamaki does a great job of showing how Vile’s beginning would also be his end. This has been a strong point of Tamaki’s run since taking over Detective Comics.

For some reason, the darker palette used in this issue did not suit my palate. There’s no doubt it was needed considering the story, but in some panels, the dark tones throw the rest of the colors off, and it just doesn’t look right. I am typically a fan of both Bogdanovic and Bellaire. Unfortunately, with this issue, I am not.

Story #2: “What the #!$% is Task Force Z” by writer Matthew Rosenberg and artist Max Raynor

Synopsis: After breaking into her apartment at the end of Detective Comics #1040, Red Hood and Deb Donovan sit in a diner where they discuss, among other things, the whereabouts of the body of Astrid Arkham. Donovan believes the Arkham Knight faked her death, but Red Hood has seen her body; she was dead. However, just because she was dead doesn’t mean she still is. As Red Hood leaves, he asks Deb to look into Project Halperin.

Deb begins looking into things, unaware of the fact that Red Hood is monitoring her after he placed a bug in her cell phone. He follows her to the Gotham Medical Examiner where she is attempting to conduct her first stakeout. They observe some masked gunmen go in and return carrying body bags. As Red Hood leaves to find out what’s going on, he tells the reporter to stay put in the car. As Red Hood fights, Donovan ignores his request and exits the safety of her car. As she attempts to call the police, someone whacks her in the head with a baseball bat, leaving the 9-1-1 operator wondering where she could be.

Analysis: It’s a little difficult to give a true analysis of this backup story found in Detective Comics #1042 as I don’t have a huge investment in the upcoming series. However, I do like Rosenberg’s characterization of both Jason and Deb Donovan, particularly as she has been written by Mariko Tamaki. The story continues to move things forward towards the inevitable release of Task Force Z, which is expected out at the end of October. As Detective Comics will be going monthly in September, it means Rosenberg has to bring his prelude to an end next issue, and it will be somewhat interesting to see how that will be done as it doesn’t feel like it has been moving along enough from the last issue. Time will tell.

While Max Raynor is not the regular artist for the upcoming series (that’ll be Eddy Barrows), he has done a decent job on art with this story. While the overall story found in Detective Comics #1042 is somewhat dark, the colors from Diego Rodriguez are a little bit too dark for my taste, even in well-lit panels.