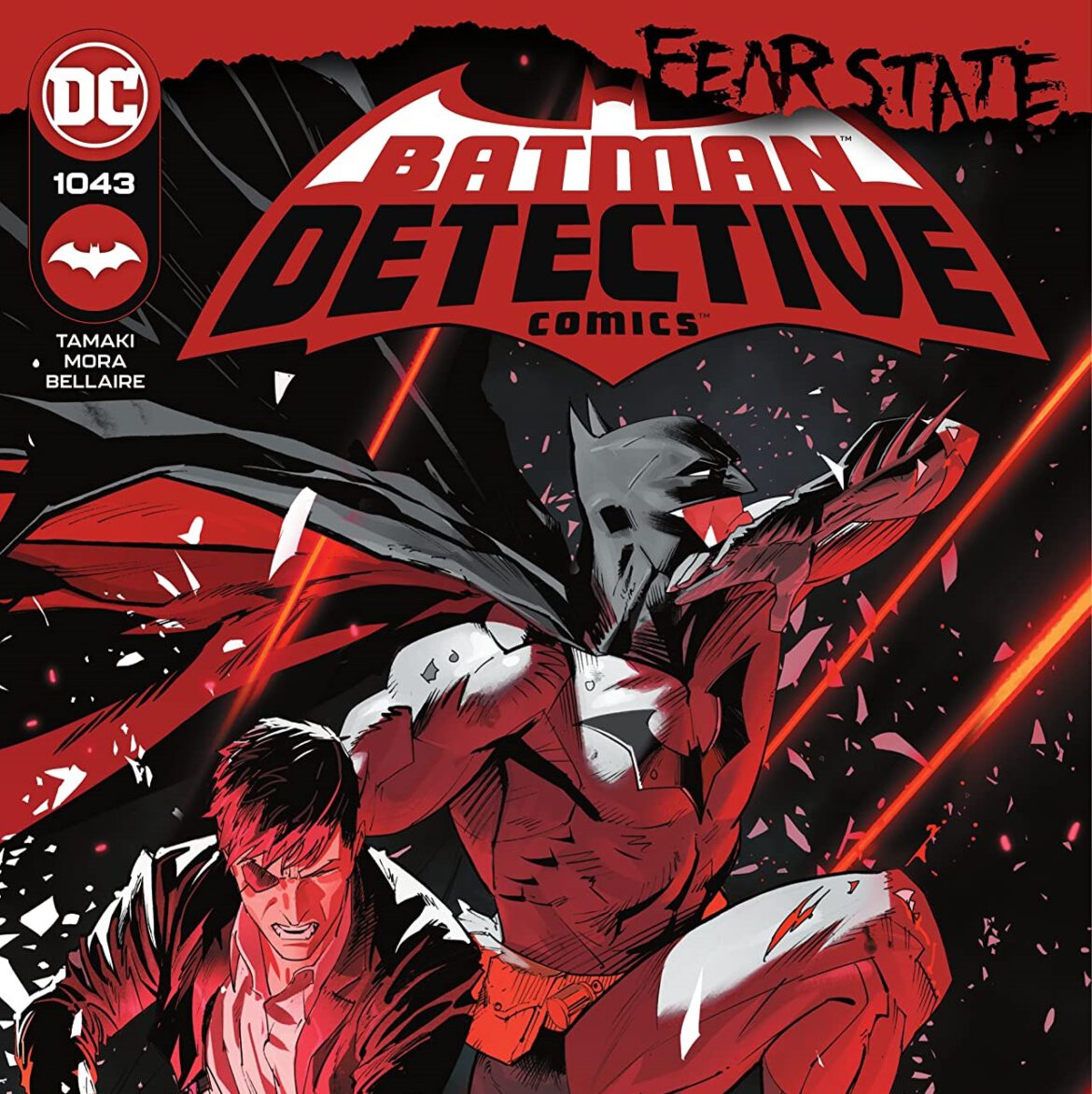 Overview: In Detective Comics #1043, as Batman attempts to protect Mayor Nakano from an assassination attempt, an unexpected surprise awaits them. In the backup story, the road to Task Force Z continues.

Synopsis: Detective Comics #1043 begins at City Hall, Mayor Nakano and his staff meet with Simon Saint and representatives from the Magistrate program. After some missteps from the group (likely referring to the mishaps of Peacekeeper-01 and the reveal of the Scarecrow in the pages of Batman), Simon Saint commits further to his vision for a new Gotham City and asks the mayor to get on board with it. Nakano ends the meeting and asks everyone to return to City Hall tomorrow. As Saint and the others leave, a security guard approaches and enters Nakano’s office while Nakano speaks with his wife. The guard’s name is Nero XIX, and he’s come to kill Nakano. The mayor takes cover behind his desk as a hail of bullets comes at him. Mayor Nakano is only able to escape by using a secret doorway in the floor. As Nakano makes it outside, another “guard” grabs him. As the guards load Nakano into a vehicle, Batman springs into action, taking out those that remained.

While the Magistrate relays information back to HQ, Batman takes off in pursuit of the kidnappers, catching up with them on a cycle. He neutralizes the vehicle by using his grapnel gun to shoot a steel cable across the street, causing the SUV to turn over and crash. Nakano crawls from the vehicle and removes a manhole cover as a gunman takes aim. Nakano falls to the sewers below. The shooter goes to follow the injured mayor with a grenade in hand before he’s accosted by Batman, who takes him out with only a few punches. The goon drops the grenade into the manhole, causing Batman to jump in as well. Batman catches up with Nakano and is able to wrap them both in his cape as the grenade goes off. The cape protects the two men, but it doesn’t keep them from separating.

As Batman looks for Nakano, he calls out for help from any available member of the family. He tells them of the attempted assassination of the mayor. He tells them that he is on a trek to find the mayor. Elsewhere, Nakano pulls himself from the water and begins to look for a way out. As he treks along the tunnels, he comes across a weird-looking mound. He uses a cell phone to give him more light. Then he sees it. The mound…

It contains eggs full of parasites… *&@%.

Analysis: Great way to begin a new arc as we enter the Fear State event across the various Bat-Books. Despite the fact that Hue Vile met his end in Detective Comics #1042, writer Mariko Tamaki does a fascinating job of keeping him relevant by using him in the form of the parasitic eggs laid in the sewers of Gotham. This is truly strengthened by Tamaki’s introduction to the issue, where she writes of the parasitic bug that eats the ant from the inside. It’s a perfect analogy to the idea of Hue Vile, especially in the panels as he met his demise.

The idea of using the eggs to tie into the main Fear State story is also a great way of expanding on the idea of fear without completely relying on the main storyline in Batman. Tamaki only mentions Scarecrow implicitly, and the mishaps of Peacekeeper-01 only appear in one panel. Yet, by the end of Detective Comics #1043, we see a frightened Christopher Nakano look like he’s ready to jump out of his skin as he sees those with parasites growing in them. Simply a great job by Tamaki of invoking a different idea about fear in her story. Tamaki also does a wonderful job in utilizing the Magistrate to tell the story as Batman and Nakano make their way into the sewers. That is a great use of character voice.

The only question I have regarding the book pertains to who attempted to kidnap the mayor? Who are they, and where did they come from? I would not be surprised in the least if it is revealed that some eggs have already hatched and have taken hold of new hosts.

I figured I wouldn’t have much to say about the art from Dan Mora. He has been a welcomed gem to the Detective Comics since being added to the title. What piqued my interest from an artistic standpoint was the intro of the issue as the story of the parasitic fungus takes place. I’m not certain if it was the palette used or maybe just an attempt to highlight the different views, between inside and outside.

I’m already ready for the next issue to release.

Story #2: “What the #!$% is Task Force Z, Finale” by writer Matthew Rosenberg and artist Darick Robertson

Synopsis: As she recovers after being hit over the head in the last issue, Deb Donovan finds herself rescued by Batman, who takes out the masked gunmen responsible for breaking into the Gotham City morgue. After dispatching the three armed men, Batman takes the Gotham Gazette reporter to safer grounds, leaving Red Hood to dispense of the remaining gunmen. Once secured, Batman warns Donovan to stay away from the story she and Red Hood have been working on. They don’t understand the danger they’re causing. He leaves to assist Jason.

Detective Comics #1043 continues back at the Gotham morgue, Red Hood has taken out all of the masked gunmen and attempts to get answers to the stolen bodies. However, he finds himself with guns pointed at him as officers arrive at the scene. Luckily for him, Batman arrives and disarms the officers looking to take Jason in. Batman attempts to get Red Hood to leave, but Hood resists, saying he will see his case through. Bruce leaves in frustration, warning Jason that he won’t be able to protect him from what could happen next. Jason attempts to get info out of one of the gunmen, but he doesn’t see him reach into his pocket until it’s too late. It’s a shock grenade, and the gunman uses it to take Red Hood out. As armed officers approach them, the gunman removes his mask and announces himself as a federal agent. Red Hood is his to take into custody.

The next day at Gotham City Hall, Mayor Nakano is speaking to a mysterious figure who has visited him. They’re discussing the morning edition of the Gotham Gazette. Despite Batman’s pleas, Deb Donovan has written her story about Red Hood and the missing dead bodies. Nakano expresses concern, but not his visitor. They have prepared for things going public. As he leaves, the visitor tells the mayor to trust.

In parts unknown, Jason sits alone, or does he? Someone speaks to him, telling him that he isn’t there as a prisoner. He’s there for a job interview. A team is being put together and the other members are “dying” to meet him. As the story ends, zombified villains appear behind him.

Analysis: I, for one, am happy that this story is over. At best, the story has been ok, but unfortunately, I have no interest in following the story. I appreciate the attempt to set up the story, but at this point, as the prelude ends, it really doesn’t do much that causes me as a reader to want to read this series. And while I generally enjoyed the Robin backup story that introduced the series, at this point after experiencing how well Mariko Tamaki and others have used the backup pages to tie up loose ends in the main story, I truly prefer the backup stories stay that way. This might also explain why I didn’t enjoy the Ghost-Maker back-up in Batman either.

Now what was enjoyable was the art from the team of Darick Robertson and Diego Rodriguez found in the backup in Detective Comics #1043. It is absolutely stunning. It’s hard not to see The Boys in everything Robertson draws and for the world of Batman, and I am ok with that.

Detective Comics continues to be a strong title, but its rating this week suffers due to the backup story. Despite some pretty decent art, there is still little interest in the upcoming title. Now that the prelude is done, I am hopeful for a return to form.