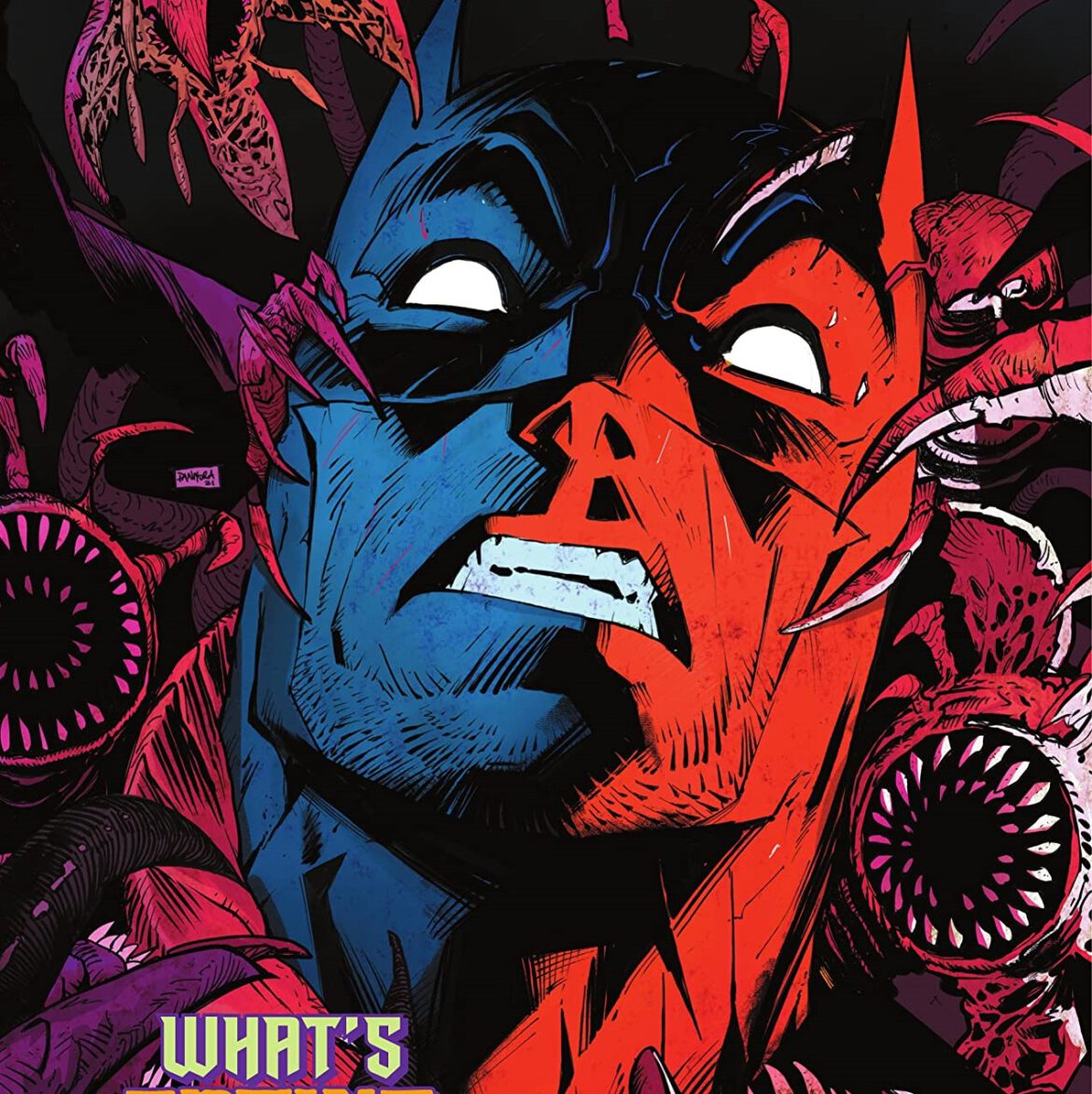 Overview: In Detective Comics #1044, Batman and Mayor Nakano continue the trek to escape from the Gotham sewers with a mound of parasite hatchling eggs in their way. In the backup story, Mayor Nakano’s effort to reclaim the name Arkham begins with the construction of Arkham Tower.

Synopsis: As Detective Comics #1044 begins, Batman and Mayor Nakano continue their trek in the sewers of Gotham with a giant wall of rubble between them. Batman is finally able to reach Oracle and tells her of his whereabouts, urging her to keep everyone away. Oracle gives Batman an update of things at City Hall where Nero XIX’s are still holed up, claiming the city hall as Nero’s new palace. They’ve been approached by a mysterious woman who turns out to be Batwoman. She quickly dispatches the would-be king.

As Batman approaches the wall separating him and the mayor, he recognizes a parasite crawling along the floor and calls out to Nakano. Nakano is not interested in getting help from Batman, but he realizes that Batman is his only hope. Nakano’s men are dealing with matters at city hall. Yet, he still distrusts Batman as he had since watching his partner die (refer back to the story in Detective Comics #1027).

Something’s happening near Nakano, however. The mound of eggs is moving. One by one, they begin to hatch. One parasite jumps on Nakano’s hand, burying itself under his skin. The mayor screams in pain as more eggs hatch and parasites attach themselves to the terrified politician. Risking another cave-in, Batman breaks the wall of rubble and finds Nakano falling into the water covered with parasites. He comes up with an idea. He raises himself from the sewer floor, takes out a taser-like weapon, and shoots it into the water, shocking Nakano and the parasites that have attacked him. Everything is silent. Batman pulls the lifeless mayor from the water and attempts CPR to revive him. It’s not working.

On the streets above, a catch basin overflows from below. It’s littered with parasites…

Analysis: Mariko Tamaki continues to throw down the gauntlet to prove that Detective Comics is the best Batman book right now. Frankly, this is not only being done with some great storytelling but also with some top-notched art. From a story perspective, since Fear State began, I have appreciated the take of each Bat-title in establishing its own state of “fear” within the universe. Some might believe that this takes away from what James Tynion is doing in the pages of the main Batman title, but I disagree. For me, it strengthens the event. Each Bat title has done enough to highlight that it exists in the same timeline as what is being covered in Batman. Some might argue that the pages of Nightwing, Catwoman, I Am Batman, etc. can get away with this as there’s little to no interaction between Batman and the title characters, making the idea that they are crossovers easier to accept. Detective Comics is different, however, because it is in fact a Batman book starring Batman. How can things exist as they have? I disagree with these notions as well.

As we can tell from the title, this fear state we are viewing is more that of Christopher Nakano – it’s titled Nakano’s Nightmare. Everything that has been read since the arc has begun has focused on things happening to the new mayor, much like Batman dealing with his Scarecrow/Magistrate/Queen Ivy issues in the pages of the main title. In the last issue of Detective Comics, we witnessed him shot multiple times from all angles. He’s fallen into a sewer, had a grenade dropped on top of him, and left facing a mound of parasitic eggs closing in on hatching time.

Tamaki continues this idea with Detective Comics #1044. Nakano’s still trapped. The eggs are hatching, and the bugs are all over him. And the one person that can save him is the last guy he’d want to have anything to do with – Batman. This episode of Fear State is about Mayor Christopher Nakano and how he is facing his fears. From the solicits we know that he doesn’t change his beliefs about masked vigilantes. Perhaps it is this state of fear that gives Nakano this resolve to continue his mission again masks – good and bad. That is some really good storytelling.

The stage is also being set piece by piece for what we are likely to get in January when Detective Comics goes weekly. Tamaki has already brought back Huntress. Now, Kate Kane has returned (granted, how could that not be her with that fire-red hair). Either way, it was a great reveal and a nice return to the main Batman pages. It will be interesting to see how Tamaki uses her and the rest of the Bat-Family beginning in January.

I can also go on about how great Dan Mora is. However, I have to give all of the credit in the world for how good the art of this first story is to Jordie Bellaire. Her sense and use of colors are absolutely phenomenal and she accomplishes this with shades of just three colors – black, blue, and red. The shades of black and blue are expected, considering the story takes place at night and in the sewers of Gotham. But when it’s time to bring in red, Bellaire does it perfectly. The pages with Batwoman taking out Nero XIX and his goons were some of the best I’ve seen from her in a while. It was truly beautiful.

As mentioned already, I can only say so much about how great Dan Mora is. Not to take anything away from what Jorge Jimenez is doing in the pages of Batman, but Dan Mora is just on an entirely different level.

It’s a great time to be a Batman fan.

Synopsis: The backup in Detective Comics #1044 takes place many years ago, at the construction site of the new Arkham Asylum, there’s a massacre afoot. The site foreman looks over dead bodies with a bloodied ax in his hands, quoting Edgar Allen Poe. After marveling over his deadly work, he begins to bang his head on a windowpane.

Today, on the steps of Gotham City Hall, Mayor Nakano is marveling over a brighter, new era of mental health accessibility with the construction of the new Arkham Towers. The media presses him over the name of the new facility considering the history the Arkham name has brought to Gotham. The mayor isn’t concerned with this, however. This new endeavor will bring a new positive history to the Arkham name, despite its dark, terrible past. Batman, in his Bruce Wayne persona, is watching while talking to Oracle. Like the press, they too are not excited about Nakano’s plans, especially the name he’s tying to it. As the mayor leaves the press conference, Bruce approaches to have a word. Nakano is not interested in hearing what Bruce has to say. Suddenly, a vagrant begins to approach, warning the mayor he doesn’t know what he just unleashed on the city with his decision. Gotham is doomed. As security takes the man away, Bruce decides that it’s time for Batman to visit the site of the new Arkham Towers.

That night, two workers attempt to finish up the job for the evening. Suddenly, they hear a noise coming from another room. As they enter, they find a coworker insistently hanging his head against a window. Before they are able to react, the bloodied man attacks, taking them both to the ground. Batman arrives just in time.

Analysis: If you’re like me and you read the solicits, you would know we’re getting a glimpse of what we’re going to be getting as Fear State comes to an end and we move into the new year with Detective Comics going weekly. The backup stories might be the most we see of the Dark Knight in the Arkham Tower storyline, and from an introductory standpoint, I have some mixed feelings.

First of all, Phillips’ references to Poe’s The Fall of the House of Usher are absolutely brilliant. If you haven’t read it, I strongly suggest it. Anyway, as part of the story goes, Roderick Usher, who has fallen ill, relays to his friend that he believes that the home in which he lives might be alive and is making him feel the way he is. It should be noted that “ill” doesn’t just mean physically ill, but also mentally, as you find out by the end of the story. In both the past and present houses of Arkham we see someone lose their wits. Could the Arkham name be cursed? It’s an absolutely great play by Phillips.

Where the backup story in Detective Comics #1044 begins to fall apart for me, however, is the art. It just doesn’t look polished. You could see that he was trying to make things dark, especially in those nighttime panels, but unfortunately, it falls flat for me and seems rushed and amateurish in style. It reminds me of what I didn’t like in The Next Batman: Second Son digital series.

I'm one of those who have enjoyed Tamaki's take on Fear State in the aftermath of Batman's encounter with Hue Vile. As Fear State comes to an end, it will be interesting to see how she brings the saga to an end and how the relationship between Batman and the anti-mask mayor evolves (or devolves).